The first of 30 Van Hool Exqui.City buses for the Belfast BRT system have been handed over at Busworld, in Kortrijk, Belgium. The new BRT system, which will be operation in Autumn 2018, will operate under the moniker ‘Glider.’ 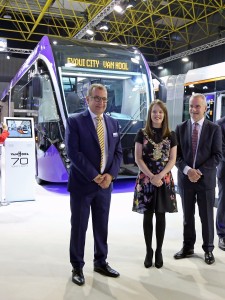 It will link east and west Belfast across the city centre and take in the Titanic Quarter. It is intended that a north to south route will follow. The first of the 18-metre articulated buses to be operated on the system by Translink was formally launched at Busworld in Kortrijk in the presence of (L to R) Van Hool CEO, Filip Van Hool; Belfast Lord Mayor, Nuala McAllister and Group Chief Executive Translink, Chris Conway