Footfall at this year’s two-day Coach and Bus UK exhibition was predictably modest, given the state of the market. But among visitors were operators who are looking on the bright side…

The best things come in the smallest packages, the saying goes, and Coach and Bus UK delivered a compact event with quality buyers, according to many exhibitors.

Feedback from vehicle exhibitors was that visitors provided a steady trickle rather than a deluge, but operators had made the journey to the NEC with serious intent. Almost all reported either serious leads or orders taken on the stand, with the usual rash of orders formalised at the show. 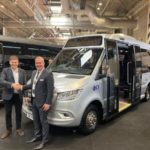 Martijn Gilbert of GNE shakes on a deal for EVM Citylines

“Lots of customers travel to meet us to put their name on their latest fleet purchases for 2020,” said Danny McGee, Managing Director of EVM. “This year, we had less quantity but more quality of visitors, with orders placed by Alba Travel Cumbria, Stagecoach PLC, Goldline Coaches, Back Roads Touring, Paddy Wagon Tours, Day Tours London, AMB Travel, One Bus Ltd, Passenger Plus Ltd, Haines Mini Coach, Every Days Travel, Airporter, Rabbie’s Tours, Homeward Bound, and Jamison’s of Shetland, to name a few over the course of the exhibition.

“As the show closed Team EVM was busy with following up the hundreds of leads generated from the show.”

In the digital issue of Bus and Coach Buyer, you’ll find show highlights. Use the ‘Latest Issue’ tab on the home page to find the coverage

The Confederation of Passenger Transport’s CEO, Graham Vidler told visitors to Coach and Bus UK that the industry must not be shy about its role in tackling climate change. 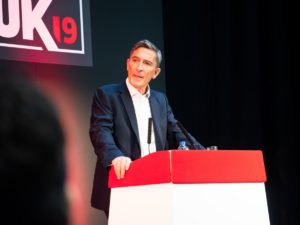 “I am fortunate to have joined the industry when there is so much to have a view on,” he said. “Most recently, there have been positive announcements on bus policy, including £500m to be spent on Scottish public transport infrastructure. This is testament to the hard work CPT Scotland has put into getting our message across.”

Graham said that, in addition to the UK Government’s announcement of a £220m funding package announced last week, the commitment to a long-term national bus strategy is very significant: “There is lots of cash being spent on our future,” he added. “It’s exactly what we asked for.

“We need to shape a strategy which puts the bus first, and lead the charge against climate change. But we also need to start a conversation about coach policy. Imagine a world without coaches. Our job is to speak out for coach operators.”

Graham said the CPT is now developing a strategy for coach which will have real benefits, but urged coach operators to help shape this policy by responding to the CPT’s appeal for ideas: “Please, share your ideas with us.”

BKM makes a debut in UK

The twinning link formed in 1966 between Nottingham and the Belarus capital, Minsk, has led to a number of diverse co-operations between the cities. The latest is the opportunity afforded to bus, tram and trolleybus manufacturer BKM Holding to develop a right-hand drive example of one of its electric bus models for trial in the UK.

BKM Holding traces its history back to a tram and trolleybus overhaul workshop established during the Soviet era that subsequently progressed to developing new products with electric power trains. The system solution offered for electric buses is based on opportunity charging of supercapacitor on-board power storage. Supercapacitors are highly efficient in capturing and releasing power and can take on sufficient power for a 20-30km range (depending on load) during a 5-8 minute charge at the terminus. Over 80 electric buses have been produced by BKM Holding since 2016, mainly for service in Minsk. The total includes 50 articulated vehicles, one of which appeared as a static exhibit at Innotrans in 2016.

The model chosen for the first right-hand drive vehicle is the 12.2m E420 OP with BRT styling and a separate driver’s cab above the front axle, chosen as the quickest to realise in the timescale required to achieve the deadline for Coach and Bus UK 2019. It has two doorways, 25 Ster seats and space for 62 standing. Should the project progress, BKM would base the production vehicle on the more conventional E321 model and also look to establish a local UK production partner to assemble the vehicles cost effectively. Welded structures and electric components would come from Belarus and supercapacitors from China while other components such as seats and motors would be UK sourced.

The first vehicle is due to be progressed through IVA during October with a view to testing starting in November. BKM will supply a 300kW pantograph charging station to Nottingham for installation in the existing compound at Queens Drive from where the vehicle will be deployed on Nottingham’s behalf by CT4N. Nottingham’s Principle Public Transport Officer, Richard Wellings, who was present with the BKM team for the press launch, expected the vehicles planned three month trial period to commence on the Medilink service, probably running free without onboard fare collection due to the cab layout.

Coach and Bus UK 2019 was the first show appearance of ADL as an NFI Group Inc. company and marked by ADL CEO, Colin Robertson, welcoming NFI President/CEO, Paul Soubry, to the stand. 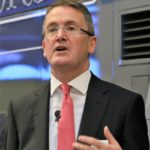 In the traditional address to the press at the start of the show, Colin referred to the current challenging market conditions in the UK and the pent-up demand that was likely to result. Manufacturers, he said, needed a steady workload but he was encouraged by recent announcements, particularly in Scotland.

The major order revealed at the show was confirmation of the fifth year of the Blackpool Transport fleet replacement programme. 15 Enviro200s and four Enviro400 Citys will be delivered in February-March 2020, completing the first cycle of the programme. Immediately after the show, an order was announced for 180 Enviro500 double-deckers to be supplied to Hong Kong operator KMB in 2020. Retail bus sales have seen year on year growth with 8.9m, 9.7m and 10.8m Enviro200 vehicles now being built for stock. Electric bus orders for the Enviro200EV and 400EV models with partner BYD have reached the 300 mark.