Tourliner P10: Right on the money

MAN Truck & Bus in Manchester has stock of no fewer than ten of the new 13.1-metre, two-axle Tourliner

I work alongside a journalist who edits magazines for Audi and Volkswagen enthusiasts, and gets a steady stream of high-end road test vehicles.

When they arrive, I get the chance to take a look at VW and Audi’s parent VAG group’s take on what makes an interior modern. Those cars are in my mind now, as we travel aboard the 13.1-metre, 57-seat variant of the Tourliner family, from the same automotive group.

My surroundings show clever use of durable-looking plastics and metal. None of this is ‘flash’ but not without style. It’s very much in the vein of the latest Audi cars in the sense that the standard of engineering is evident, and great thought has gone into practicality.

MAN has pinned its faith in this variant because it’s precisely what operators have demanded for a couple of years now – 57 seats on two axles with adequate weight margin for a tour payload, and good fuel economy. The Tourliner P10 is very much a coach of the moment.

The MAN Tourliner offering already included a 12.2-metre two-axle P21 coach, 13.4-metre tri-axle P20, and 13.9-metre tri-axle P22. The P10 completes the picture for MAN Truck & Bus… and promises to be the coach many operators have been waiting for.

MAN’s sales office is based at Swindon but the stock is held in Manchester. Anyone who hasn’t been to the MAN Truck & Bus HQ near Trafford Park should; it’s a massively impressive set-up, admittedly dominated by the truck element but underlining the massive parent company’s determination to be a major player in heavy vehicles.

The Tourliner has a nice economy of styling, with no exaggerated curves or tokenism. It’s a sound policy if you want to avoid problems with the transience of fashion.

It’s not an ugly coach, nicely proportioned and purposeful with flat side panels that would be a joy to vinyl wrap or show off graphics. The shut lines are even and impressive on all panels. At the front, there are curves following the upswept style of the headlamp units and understated panels; it’s not a coach which will age.

The most obvious distinguishing feature are the B pillar panels, which slant forwards to the top edge of the windscreen, carried back along the roof line by an additional trim panel, in a ‘Z’ shape. Other than that, the Tourliner is a subdued design.

At this new length, and because the wheelbase has been extended a metre, the Tourliner has three luggage doors, with no powered option, each inset with a muted orange marker light in the door handles. The luggage doors are gas-ram assisted. The luggage space is excellent, with plenty of room for a touring group.

At the rear, the screen is a neat tapered shape, with the rearview camera installed in a special panel at its base. Below this, two curved louvres vent the engine bay, and the engine bay door is neatly worked into the lower louvre. Light units are single-lens and triangular, wrapping round to the side with a small infill panel next to the louvred AdBlue access door. The nearside has a much larger louvred panel over the cooling pack.

The coach avoids AdBlue/diesel confusion by having the AdBlue filler on the offside, fuel filler on the nearside. Although there is an AdBlue access cover in the rear offside panel, the panel can also be lifted if the driver does not have a long-necked filler spout to reach it.

The front of the coach is of very ‘clean’ appearance verging on anonymity, but has impressive access to service areas such as the slim, upswept lighting units which sit above the front valance. Currently, the lighting is a mixture of neat LED and halogen lamps but Xenon lamps are an option, and full-LED lamps are planned to be used soon.

The passenger door opens to reveal a five-step entrance via tip-up courier seat. 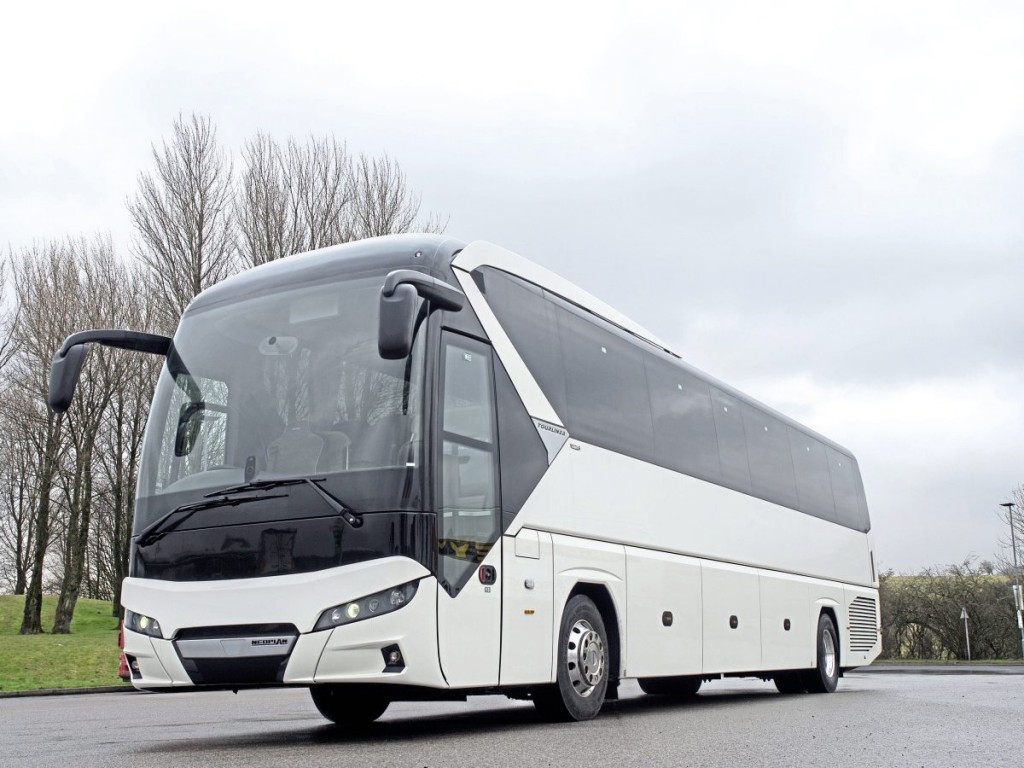 First impressions count, and the example of the P10 we road tested oozed quality.

Nice use of brushed stainless metals, quality plastics and piano-black panel insets gave an immediate impression of car-like levels of durability. Everywhere, Neoplan has picked out the Tourliner logo in LED blue, the first example being on the gloss black panel behind the courier seat. It crops up again on the luggage rack ends, too.

The example we tested had charcoal grey carpeting on its fully-flat floor and similarly-coloured seats. They’re made by Kiel, with leather headrest insets and lateral displacement (they slide into the aisle) with armrests centre and outside, footrests and seatback tables.

The seatback tables and grab rails are worthy of special mention. The grab handles are equipped with neat hooks to hang coats and bags while the table has cup holders plus a groove along the outer edge in which passengers can perch tablet computers and phones, complementing the twin USB sockets which sit low between each pair of seats.

On this subject, this is probably preferable to USB sockets in the vehicle side – which means one passenger might have another’s charging cable trailing across them – but I think it’s high time seat makers built them into luxury coach seat backs, routinely.

Fabric trim is a light grey velour which matches the mouldings. The windows have pull curtains and above the windows are open luggage racks. Aircraft-style lockers are an option. There are two lidded luggage rack boxes in this specification.

The passenger service units are tucked along the window edge of the luggage racks, with variable-strength reading lights and ventilation. The air-conditioning inlets are mounted directly below the roof-mounted pod near the front. Heating is via convectors mounted along the wall – they proved extremely efficient.

The centre, sunken toilet in the offside stairwell was neatly finished and reasonably spacious. The coffee dispenser is in the stairwell, too, with a drop-down table and storage drawers to store the drink cups.

For express operations and others requiring wheelchair access, a wheelchair lift can be installed. In this variant of the Tourliner, it goes over the front axle, which may be the preferable place for operators who routinely carry wheelchair-using passengers. 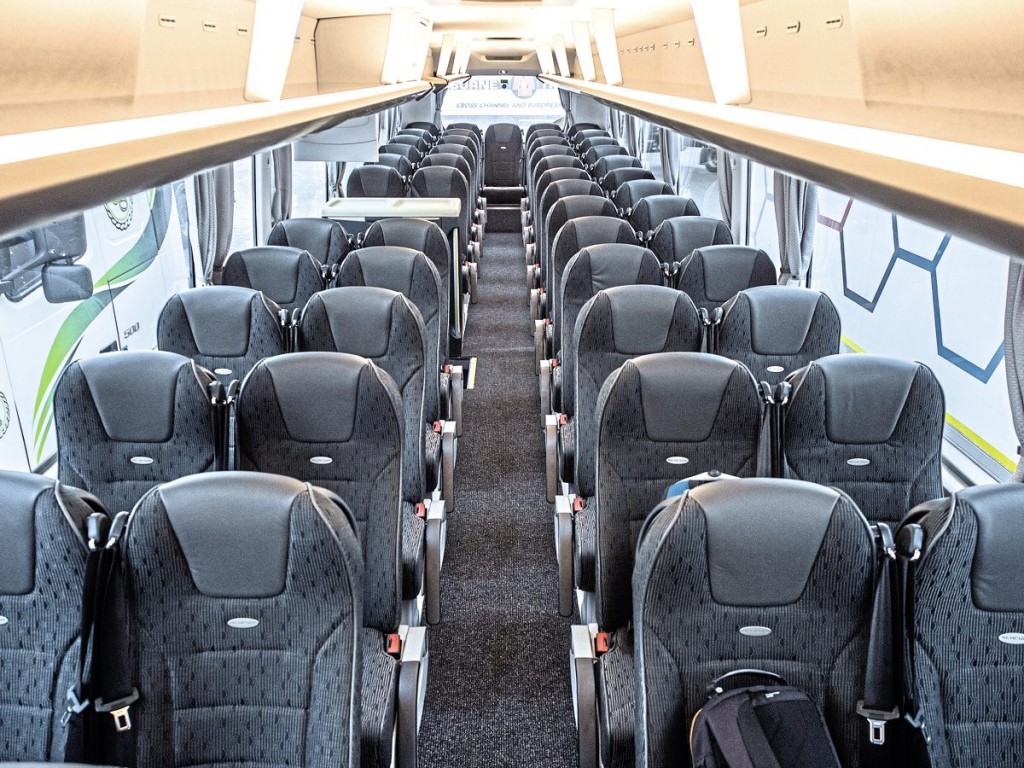 The flip-up courier seat is complemented by an inset footrest opposite, and has a stalk-mounted microphone just inside the passenger door.

The driver is well catered for, with a switch layout of impressive simplicity, tacho at a sensible height, sat nav and media screen on the left, and an additional switch panel on the right with cup holder, accessory socket and USB socket.

The climate control system can be regulated by the driver in the passenger saloon, but the driver also has heating controls for the driver area. The coach had electrically-operated sunblinds.

Low to the left of the cockpit is a really useful four-compartment storage unit, the top compartment holding the audio/DVD head unit; very useful for stowing the growing amount of paperwork needed for European touring.

The steering wheel has controls for the driver’s phone, microphone, audio and, to the right, cruise control switching. The driver has a separate microphone at his right shoulder.

As standard, the coach has LDW and EBS to meet legislation, and has automatic wipers and headlamps. MAN telematics are provided. 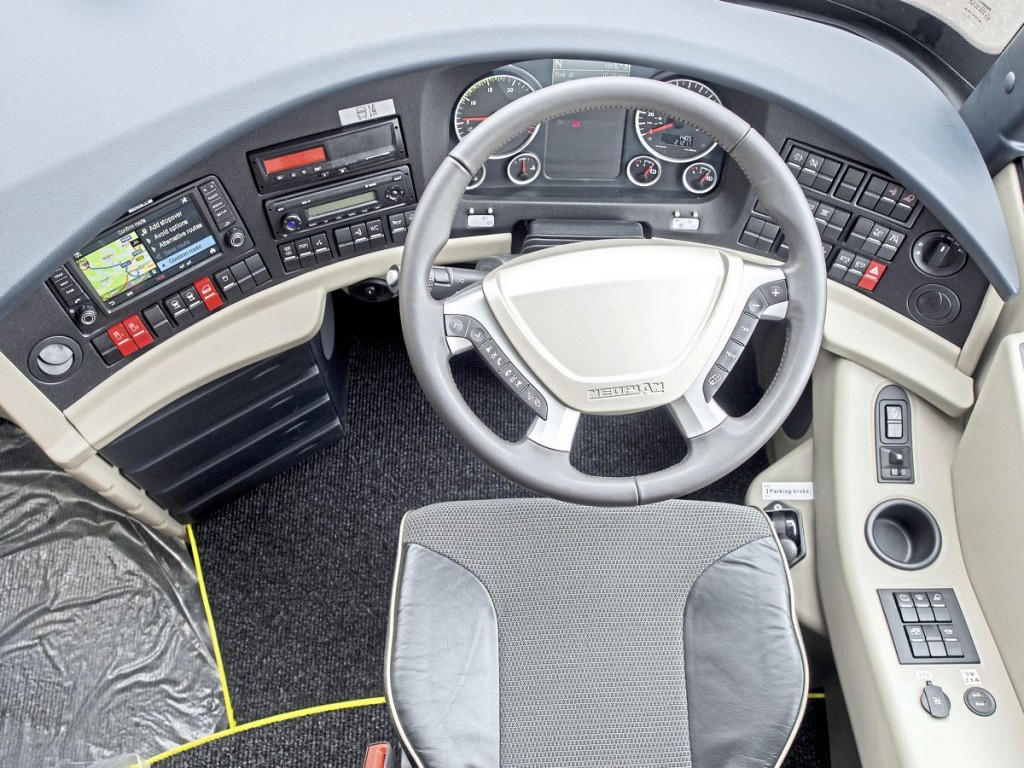 With 420bhp available under the pedal and 2,100Nm of torque at around 1,000rpm, this Tourliner was never going to be a slouch.

The ZF EcoLife automatic gearbox, now upgraded to match more powerful engines, may only be a six-speed ‘box but gearchanges were smooth and always kept the tachometer with the ‘green’ range. Though MAN TipMatic 12-speed automated transmission is available (and the only option on the more powerful 460bhp version) the smart money is on the EcoLife being chosen by most operators.

Our coach driver remarked quickly how good the feedback was through the steering wheel, with no woolliness and good reaction to small corrective inputs. Through the Metrolink roadworks outside of MAN Truck & Bus, the coned chicanes and narrow areas were negotiated comfortably, and the driver said the mirrors were first class.

Though he felt visibility was generally very good, he did remark that the window behind the B pillar being banked by a trim panel did slightly restrict over-the-shoulder view, but said this is now common with modern coaches.

Retarder and brakes worked perfectly and in harmony, without unintentional over-braking and giving a phenomenally smooth ride. Switchgear was easy to locate, he said, and at no point confusing. Our pre-PDI coach had a ‘centre door open’ light showing – which would have been reset by PDI – but all other warning lights operated perfectly, as did the LDW buzzer.

On the motorway, the coach has 1,350rpm on the tachometer at 100kph. It was extremely stable and predictable despite some stiff crosswinds. It dealt with the UK’s potholes brilliantly. At lower speeds, there was a hint of harshness over stippled road surfaces but road noise was very difficult to detect anywhere in the vehicle. Perhaps Neoplan’s development of aerodynamics, with a 10% reduction in drag, has some bearing on this.

In the rear row of five seats, the passenger’s proximity to the quiet rumble of the engine and gearbox was obvious but never intrusive. In seats opposite the centre door, road noise was very slightly worse, but again, the babble or even whisper of passengers would have drowned it out.

Most impressively of all, there were no rattles, and we tried extremely hard to find them. It was very obvious that the quality of assembly was on a par with any coach at this price point, or any other.

The driver also remarked on the entrance which, although not the widest in this class, offered good grab rails both sides within reach of a boarding passenger; the problem with some wide entrance throats, he said, is that elderly folk can then only reach one grab rail.

This Tourliner has a 400-litre fuel tank which, even though it delivers around 11mpg on a varied route, may seem low. However, this improves the payload overall and is actually the result of ensuring the coach is within axle limits, we are told.

The washer bottle is under the hinged front valance panel near the spare wheel, and easily accessible by the driver. AdBlue, as we’ve said, is filled on the offside, and diesel at the nearside.

There is absolutely no doubt about it, the P10 is a great addition to a line-up of Tourliners which are already a class act.

The styling was never going to win design awards, and that isn’t meant to be a negative; this is a coach which puts substance over style, and succeeds. The quality of the interior, in particular, seems durable and the absence of rattles of any kind suggests the factory is at the top of its game.

As a tourer, it has the power and smoothness to tackle ski work fully loaded but its strength may well be that it begins its life with subdued looks but in consequence will be ageless, and if it’s a durable as it appears, can be cascaded down the fleet.

It’s no surprise to us that there’s healthy demand for 57 seats on two axles – a formula which has worked for other manufacturers. The P10 Tourliner is right on the money. 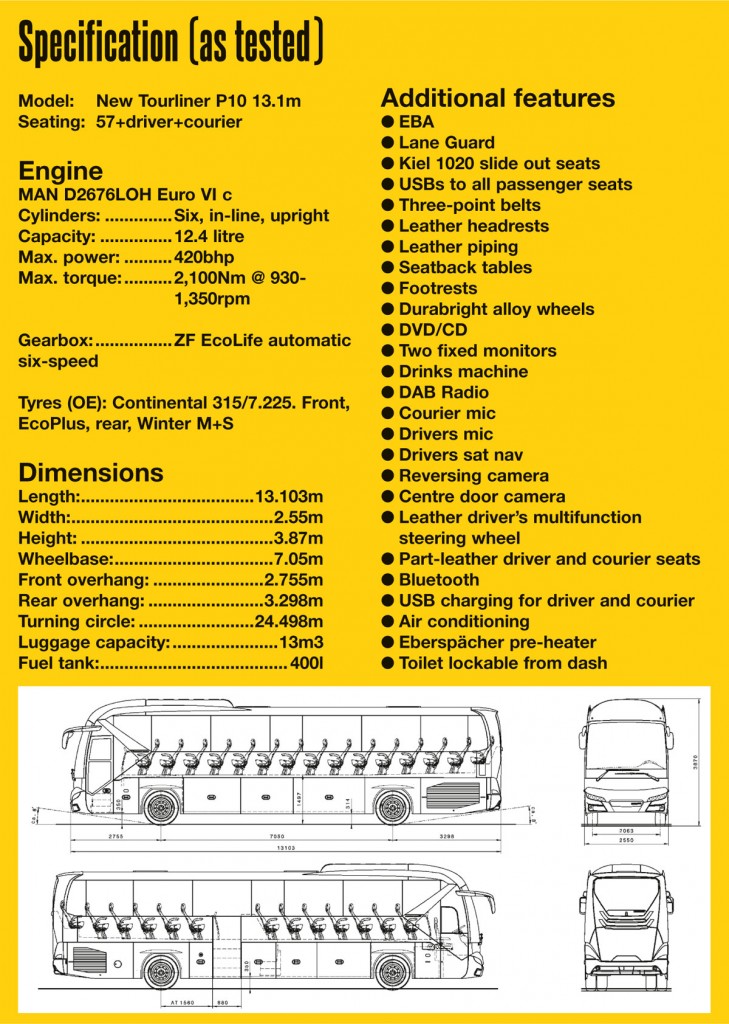 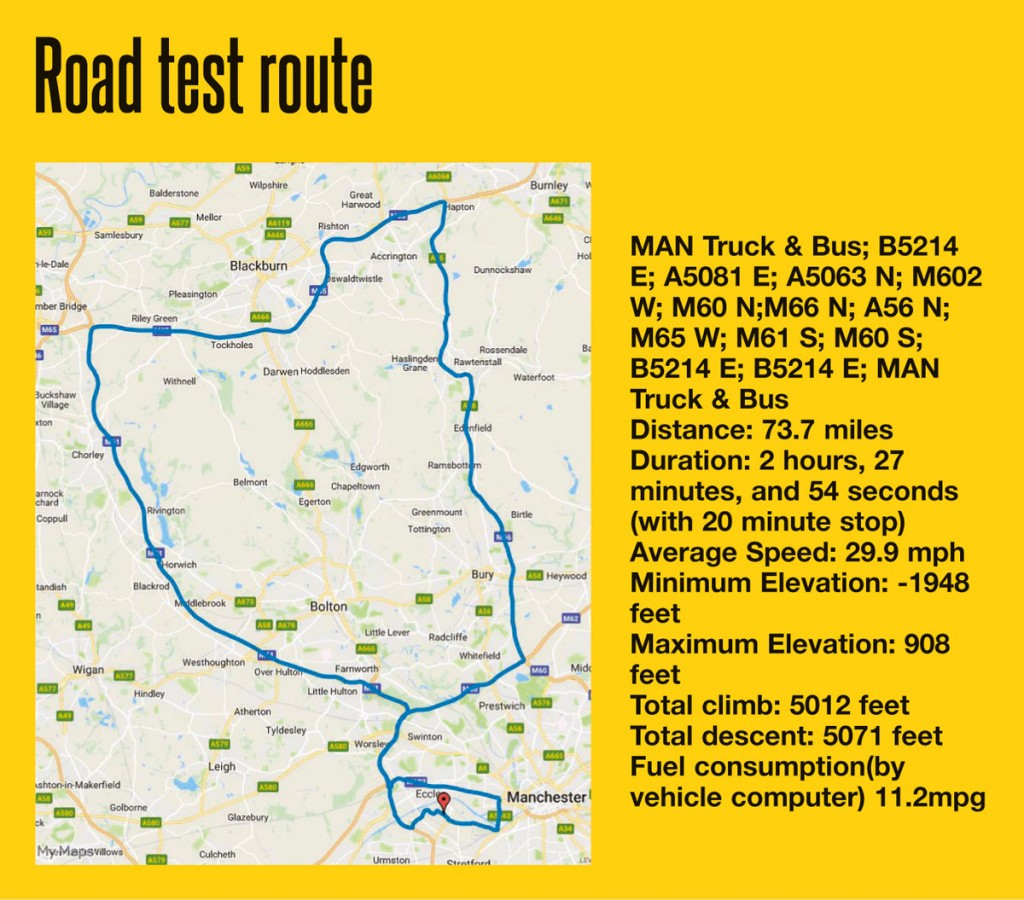