Rhino rugby teams up with Temsa

Leeds Rhinos rugby team is gearing up for the new Rugby League season with the announcement that coach manufacturer Temsa has become the club’s official transport partner in a deal worth almost £250,000.

Temsa is enjoying strong growth in the UK through an exclusive partnership with Arriva Bus and Coach and this latest sponsorship deal with Leeds Rhinos is the first of its kind in Super League. 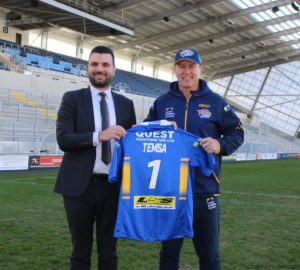 Rob Oates, Rhinos Commercial Director, said: “To have an official transport partner of this stature is not only a first for Leeds Rhinos it is also a first for Super League and I am delighted that we are continuing to lead the way both on and off the pitch.”

The Temsa sponsorship will include the first team playing shorts and training kit with further major announcements set to be made throughout the season.

Aykan Cavlak, Temsa UK Sales Manager, said: “We were working with Arriva Bus and Coach to find a sponsorship partner that could help us build on our growing success in the UK.

“Leeds Rhinos are the most successful club in the Super League era of the sport but it was also important to us that they share our values of integrity and respecting tradition while also having a modern outlook and approach. Together with the growing popularity of Rugby League and increased television audiences Leeds Rhinos are the perfect partner for us.”

Andrew Cullen, Managing Director of Arriva Bus and Coach, added: “Coaches have been part of the fabric of rugby league for generations, taking supporters to memorable away trips and Wembley cup finals as well as providing transport for players. I’m therefore delighted that we have been able to bring together Temsa, a prestigious international coach manufacturer, and Leeds Rhinos, a club at the heart of our community here in Yorkshire.”