Building on a close relationship with Mercedes-Benz and its engineering expertise, EVM has opened a second facility to fit approved PSVAR equipment on the iconic Tourismo coach

EVM has opened a new PSVAR conversion facility near its Crawley base to increase its capacity with Mercedes-Benz Tourismo coaches.

Well-known for its close association with the German coach giant, EVM has approval for a conversion which, it says, does not compromise any part of the structure of Tourismo. The conversions have been underway at EVM’s Kilbeggan factory since last year, but now, EVM has created and staffed a new engineering unit in Horsham. 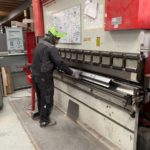 Since November 2020, when EVM put their hand up as a competent convertor for the PSVAR conversions on the Mercedes-Benz Tourismo MkI and MkII, Ivor Jones and his team in Ireland have been busy with development of their offering: “Weeks have been invested to achieve the safety – quality and factory finish operators would expect to see on their Mercedes-Benz Coaches,” commented Ivor.

The frame of the door is made from a high-strength carbon steel, welded to the OEM structure to guarantee resistance over time without compromising the strength of the original coaches body’s structure.

The door itself, made from a light and strong alloy steel, guarantees resistance and at the same time does not considerably increase the weight of the structure while maintaining the original position of the vehicle’s centre of gravity. 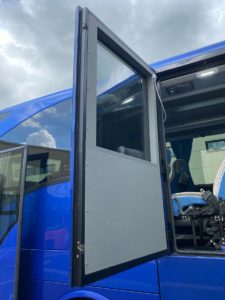 Stainless-steel hinges are installed to avoid any corrosion problems in later life. The door lock mechanism comprises two safety locks, located one at the top side, and one at the bottom side of the door. This guarantees first of all a double safety and, a good water seal/noise insulation. A buzzer and light warns the driver if the door isn’t properly closed. In addition, the door is linked with the vehicle’s central locking system. For safety reasons, the door can only be opened from outside; there is no handle from inside which can be operated accidentally by passengers.

In terms of transparency and thermal conductivity, the windows installed are designed 100% to match the OEM’s ones both in colour and size; EVM has invested heavily to develop three colours offered originally from EVO BUS and achieved an equal or better factory finish. 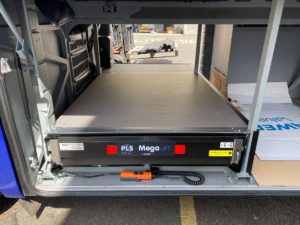 The PLS Megalift wheelchair lift is positioned in the luggage compartment and is as close as possible to the ground; this guarantees a very low COG (centre of gravity) which doesn’t have a negative effect on the position of the original handling of the coach;

The cassette lift is fitted firmly to a bespoke frame which is then fixed to the original structure of the vehicle. To guarantee a correct functionality of the lift, a sealed flap is added to the OEM side locker door. This is to avoid any possible water leaks into the luggage compartment which could be caused if a dedicated side luggage door is installed. Again no compromise on the quality of the original product.

EVM’s configuration sees two double seats fitted on NMI Millennium Quick-release fittings and recessed floor tracking supported underfloor by a bespoke additional structure which has been developed and tested by the manufacturer to R80 pull test and Regulation 107 bus certification.

Hanover destination panels – the most reliable on the market, EVM believes – are used and the installation is in accordance with the manufacturer of the system; there is no negative impact when the panels are fitted and integrated with the OEM electrical system. 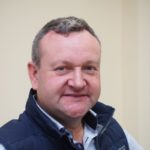 The heating system (only on the side where the door is fitted) is re-engineered and the parts used are both OEM, where possible, and high-quality parts, to guarantee the highest standard and performance.

After the vehicle is completed, a deep check-up is performed to guarantee the highest level of quality. The result is reported and stored in our database to guarantee the traceability in accordance with the ISO quality standard. 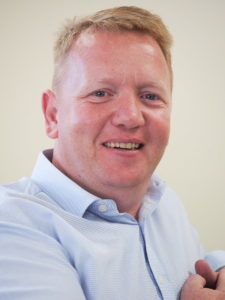 PSVAR Conversions undertaken by EVM are being returned to their owners with a PSVA1 Accessibility Certificate from DVSA.

“Guy Billings, covering the South, and Matt Thompson, covering the North, are really pleased with the feedback received by customers post delivery of the first vehicles,” said Danny McGee, EVM’s Managing Director. “Despite the development taking longer than planned we are really happy with the final result achieved by the engineering team at EVM.”

EVM’s new engineering unit opened on 4 May, created from an existing warehouse EVM has in Horsham, West Sussex. This will increase their capacity running alongside their Irish facility, This sees a team of six engineers receiving factory training, with quality carefully monitored by EVM Engineering Director, Cosimo Facecchia.

“Its not just about cutting a hole in the side of a coach and fitting a lift and door,” said Danny. “Behind the scenes we have to support a product liability insurance policy of £10 million should the worst happen and something goes wrong with the conversion which causes injury or fatality. Not something a customer should consider, but important if it is ever required.”