Pelican Yutong has sold the first electric airside bus in the UK to Newcastle International Airport, with the prospect of more as the airport drives its green ambitions.

The Yutong ABe13 airside bus uses the same driveline as the proven TCe12 electric coach, with a 258kWh Lithium Ferrous Phosphate (LFP) battery and 350kW motor driving the front axle. Batteries are stored on the roof, along with air conditioning, and the drive control electronics in the front bulkhead between the passengers and the driver. 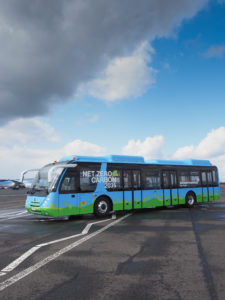 Newscastle International currently has a fleet of diesel airside buses, chiefly Cobus and Neoplan, but is aiming to achieve Net Zero carbon emissions by 2035, utilising existing space for a solar PV array and taking other measures, including making the airside fleet electric.

The six-door, 100-passenger capacity ABe13 is an integral with lowering air suspension, extra-wide and with extensive CCTV both inside and externally. This includes a 360-degree external view for the driver when reversing – considered essential when moving around aircraft. 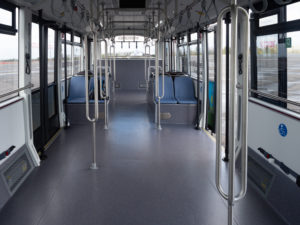 The 13.8-metre bus is claimed to have three times the range of its competitors, allowing it around ten day’s use before a recharge which could be accomplished in as little as two hours. In addition, it lists at a price which very significantly undercuts its competitors.

A ride around the parked planes at the airport – revealing the sad impact of lockdown – showed the ABe13 to be almost silent when on the move. The driver said that, compared to the diesel fleet, the Yutong had a better turning circle and was easier to manoeuvre. The airside buses at Newcastle make around 24 movements of passengers every day.

Pelican Yutong’s UK Sales Manager, Bob Elliott, said that the response to the airside bus had been very keen before lockdown, and that there were prospects for sales of 12 vehicles. Orders are expected to return as the air travel industry recovers. Pelican Yutong will be at ITT Hub, on 30 June and 1 July.