Launched just weeks ago, ShuttleID is an on-line payment collection and cashless ticketing system designed specifically with home-to-school transport in mind. Tetleys of Leeds, which has used it for nearly a year, helps explain why the system has made its life easier

With operators increasingly having to manage fares on home-to-school services, a Yorkshire entrepreneur has come to market with perhaps the most cost-effective cashless ticketing system.

Software developer Chris Bell has created ShuttleID, a ‘cloud-based’ system which can manage payments by the year, term or month, issue electronic tickets to pupils’ smartphones and has the cheapest ticket validator available – adapted consumer electronics at a fraction of the price of most ticketing hardware. 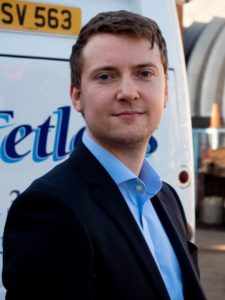 Chris came to the idea after years of work on operator websites and systems during which he saw first-hand the challenges being faced by coach companies with school contracts; in particular, in his association with Tetley’s Motor Services in Leeds.
At one time, schools administered the bus passes themselves but Tetley’s found itself being passed the work and risk during tendering in recent years. So it set about finding a system to administer school bus passes.

Tetley’s operates to two schools, with six services to one and two to another, using double-deck buses. Monitoring payments each term, identifying pupils for each service and eliminating ticket fraud had been a preoccupation which had, eventually, led it to use another ticketing system: “But it just didn’t work for us,” said Danny Milnes, Tetleys’ Transport Manager. “It gave us access to the travel passes and no details, and would even give us the name of the parent who had paid for the pass, rather than the name of the child.”

On top of that, the previous ticketing company collected the money – as much as £40,000 at a time – and Tetley’s often waited weeks to get it, causing cash flow issues: “Worst of all, when issues arose, they took ages to address them,” said Ian Tetley, Managing Director.

The operator’s connection with Chris Bell then came up trumps: “We took a look into the e-commerce side of this, and we considered doing this through the website along with PVC photo IDs,” said Danny. Chris saw the opportunity to develop a single platform that would solve all their problems, creating software behind the same secure servers used by Amazon. The result, an operator-friendly administration system which allows operators to create the school services, set price points and much more. For parents, they can easily purchase the passes, delivered electronically, which eliminates having to pay the annoying replacement card fee.

This has several advantages for operators. It means the operator does not have to host software on local machines and servers with the associated risk, and ShuttleID takes care of compliance issues, including GDPR rules (which Chris says has been done ‘to the max’), placing all data behind layers of security. 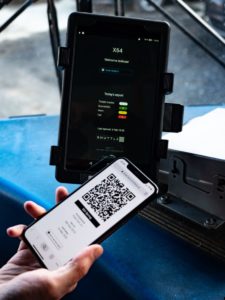 “The pupil then gets a unique QR code, and that’s the only thing they need,” said Chris. “Most pupils have it on their phone but we recommend to parents that it is printed and carried by the pupil as well – it’s in a credit card size, so will go into a wallet.”

Every pupil is named on the pass, and a photo helps the operations team identify passengers with CCTV. Once the child has validated the pass for the outward or return journey, it cannot be used again. Any attempt to use the pass twice alerts the driver, although Tetley’s has a rule that all children are carried, and any discrepancies are investigated later.

Perhaps the most cunning part of the system is that it doesn’t use bespoke validating machines, but instead uses specially-adapted consumer ‘tablet’ computers at a tiny fraction of the cost – “the cheapest on the market”, says Chris. The driver needs to do nothing as the pupil offers the QR code to the tablet camera, instantly validating it for that journey. The data from the morning is uploaded to the back-office software and all discrepancies are shown, allowing the operator to take any action needed.

This is possible because the system takes details of the parent and pupil. “Before this, we had to reach the parents through the schools,” said Danny. “Now we can go direct to the parents. It’s useful just before the start of term because we can notify all those who haven’t renewed their passes.” 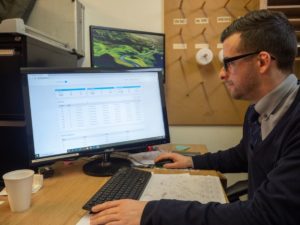 Is ShuttleID just the ticket?: “It’s really user friendly,” says Danny Milnes of Tetleys. “I can set up a new route in ten minutes. I can set the seat limit so that when the parents buy the passes, they can see how many seats are left.”

The burning question is ‘What’s the cost?’ Scoring heavily over its competitors, ShuttleID has no up-front costs apart from the hardware, and starts at 3.5% plus 20p per transaction, which includes the cost of the payment processor. A ‘lite’ system is also available for operators who don’t take payments but want to benefit from ticket scanning, which is charged at a modest monthly fee. The scanners are £90 plus an optional one-off £70 set-up charge.

Tetley’s – at the heart of Leeds

Claimed to be the longest-established coach operator in the city, Tetleys has been serving schools for generations. The market hasn’t been without its challenges, not least the issue of PSVAR compliance and the introduction of a Clean Air Zone for Leeds this summer. Ian Tetley, the Managing Director, is confident of a bright future but says both are flawed.
“PSVAR is a nonsense. There is a huge SEN taxi industry which takes pupils in wheelchairs to school. The money spent by operators and the government pursuing this would be better spent elsewhere. We have applied for all the exemptions.”
Ian also feels that the Confederation of Passenger Transport – of which Tetley’s is a member – let coach operators down over the CAZ in Leeds: “I believe they were too chummy in their discussions with JAQU on how the ANPR system operates, and we now will have to manually register every school bus (or non-euro VI) incursion into the CAZ. Surely, in the 21st century, implementing a fully-automated system similar to the London ULEZ isn’t too much to ask? It represents an unnecessary administrative burden.” Tetley’s depot is just outside of the zone.