National Express has revealed how it chose the lockdown to restructure its coach routes using travel patterns collected by thousands of mobile phone records.

The revelation came during a webinar organised by Busworld, the organisation which stages the biennial European show, due to take place again next year. John Boughton, Commercial Director of NatEx Coaches, said that the 13 days from lockdown saw its 1,700 services fall to zero, but 87 days later, it restarted the network. 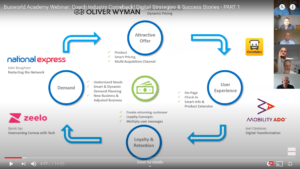 The customer journey was explained in full

“The first lesson we learned is that it’s a lot easier to shut a network down than to restart one,” he said. “It was an opportunity to rebuild our network – a once-in-a-generation opportunity. We had a lot of baggage from the past, and were seeing a majority of our revenues coming from a minority of services.

“Data drove all of our reorganisation decisions in the biggest data analysis we have ever conducted.” He said that anonymised mobile phone records from a third-party supplier could recreate journeys from hubs such as Gatwick Airport, showing the travel patterns of all arrivals in a heatmap. 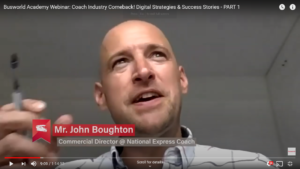 John added that a core exercise was to provide reassurance to customers that it was safe to travel: “Apprehensive customers will not book. We had to empathise with customers, and we wanted to be a leader in reassurance with a programme of works across stations and the fleet.” He added that NatEx also eliminated uncertainty by offering no-quibble refunds for all travel.

He said that, in four weeks, it has seen 20-30% of customers return, and although the coach division has not yet returned to profit, he said that they were seeing it as an investment: “We will be able to get to 50% capacity as we get smarter about socially-distancing groups on our vehicles.”

The webinar also featured Max-Alexander Borreck of Oliver Wyman, a Munich-based company which advises on dynamic pricing – the discount-led approach widely used by airlines and rail to stimulate demand: “Airlines using just one price per seat would not make any money,” he said.

The principle of dynamic pricing is to encourage early booking of a proportion of seats, with prices increasing closer to departure, and to segment the audience so that discretionary travel gets discounts while, for example, business passengers who have less price resistance might pay slightly more.

Although Max said that although complex algorithms and computing are needed for larger operations, smaller companies such as coach operators could do their own, manually-configured, experiments with staged, reducing discounts and reach a model which would – contrary to expectations – achieve better booking patterns and higher margins.