Keltruck unveils its latest facility in the Golden Triangle

The ‘Golden Triangle’ between the M1, M6 and M69 supports a fast-growing logistics infrastructure generating a need for quality support services for the many vehicles operating out of the area. Keltruck has had a presence in the Lutterworth area for a number of years and recently opened state of the art new premises supporting the Scania marque on the Magna Park estate. David Cole went along to the customer launch day for Bus and Coach Buyer. 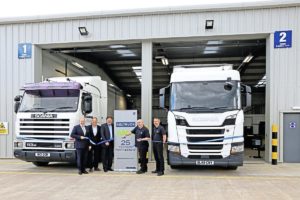 Keltruck’s new Lutterworth premises occupies a 17,500 square metre site that was previously part of the parking area for Asda’s distribution service, one of the key Scania operating clients for the facility. The site includes a four-bay workshop facility with integrated office and stores together with an external wash bay and parking for a minimum of 26 lorries and coaches.

Three of the workshop bays are equipped with Premier Pits, the fourth has access to a range of Stertil-Koni lifts and features a rolling road brake testing system from VLT Test Systems. Double-deck vehicles can be accommodated. The site is an Authorised Test Facility with an office provided for DVSA within the workshop. The site design encompasses current environmental best practice including roof mounted solar panels, ambient light level control and water use minimisation.

The site provides full back up for vehicles with Scania Repair and Maintenance (R+M) packages and also offers Keltruck’s own services in support of, principally, Scania vehicles where the company has nearly 40 years of experience. All Scania coach products are supported with technicians on each shift whose training includes the Omni, Irizar and Touring products offered by Scania Bus and Coach. On site services include full air conditioning and tachograph support while mobile technician support is provided across the local area including busy sections of the M1 and M6. Keltruck also have a range of additional services available from local partners in support of fully inclusive R+M packages. A mobile workshop facility facilitates testing to meet LOLER requirements, including bus and coach lifts for which Keltruck is an agency for most suppliers.

Alongside a selection of classic and current Scania trucks, the Scania coach range was represented by an Irizar i6S bodied K360 IB4x2NB supplied by Scania Bus and Coach. 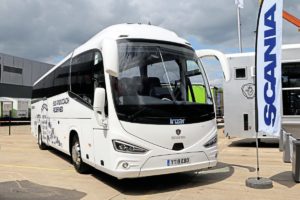 Scania Bus and Coach presented their latest demonstration vehicle, a K360IB based Irizar i6S, at the event 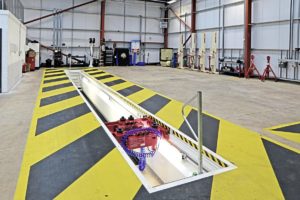 The 12.45m demonstration vehicle with 54 seats and 798kg luggage capacity carries Scania’s ‘partnership’ branding representing working together with organisations such as Keltruck, “trusting each other to keep our business running.” Crouch Recovery were also on site with a five-axle Scania heavy recovery vehicle finished with a complex graphic depicting the company’s vehicle heritage.

During a tour of the site, Keltruck’s Andrew Bentley, General Manager Marketing and Business Development, explained the background to Keltruck. The company was established as a Scania dealership by Chris Kelly in 1983 based in West Bromwich which remains the headquarters location. Additional sites were subsequently developed in the West Midlands and growth through acquisition has seen the company expand the Scania operation into the East Midlands and Wales. 17 facilities are now operated making the company the UK’s largest independent Scania partner. Lutterworth is the second newly relocated site to open in 2019, following the establishment of a new site in Hereford. Full Scania R+M facilities are available at each site together with paint shop facilities in West Bromwich and Newark.
Key to Keltruck’s success is the workforce of Scania skilled technicians. Currently the company, with a workforce of 438, has 36 apprentices across technical, business and parts skills.

The Keltruck site at Lutterworth operates on a three-shift system Monday to Saturday with Mark Taylor as Depot Manager. It is located off the access road to the Asda Distribution Centre at the eastern end of Magna Park’s Hunter Boulevard. For more information, visit https://bit.ly/2FGbLrh