Lothian’s Stitt scoops win at Bus Driver of the Year

Staged on Blackpool’s seafront, the UK Bus Driver of the Year Final saw Adam Stitt rise up the rankings from 23rd to take top slot. Stuart Jones was there to congratulate him

It was third time lucky for UK Bus Driver of the Year 2019, Adam Stitt of Lothian Buses. Having finished 23rd last year, he said: “I was just hoping for a better result. I’m overwhelmed; I can’t believe it.”

One of the last competitors to set off, with start number 80, he preferred this to being third to go last year because it gave him time to have a good look at the obstacles before taking to the course in one of Blackpool’s ADL Enviro 400Cs. In fact it was a very clear victory as not only did he get the best theory test score (and a cheque for £300), he was the only driver to score more than 1500 from the possible maximum of 1730 points in the combined tests, with a total of 1518. 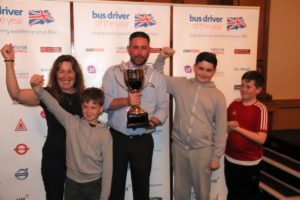 Adam, based at Lothian’s Central depot, was one of many drivers who had brought along the family, including his mother, partner and three boys, for moral support. They were able to share in his success along with colleagues and Lothian MD, Richard Hall, who was one of the first to congratulate him. He thought the prize money of £4,200 might go towards a new motorcycle; possibly a Honda Africa Twin.

Second-placed Adam Ksiazek from First Aberdeen has been Mr Consistency in the past few years. Entering for the fourth consecutive year, his runner-up spot followed 14th position last year, winning the competition in 2017 and finishing fourth in 2016. With First since 2007 and accompanied by the man who originally trained him, Adam thought this year’s event had been “a very tough competition, although everybody had the chance to win.” His advice to others was: “Get used to the bus and relax.” He thought the £3,000 won in prize money would go towards the cost of a house he is building. He is likely to be back in Blackpool before next year’s competition because, among his prizes, was a two-night break at The Grand Hotel where the event was based. 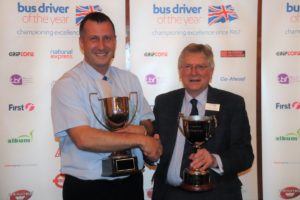 For third-placed Amanda Hough of First Hampshire, Berkshire & Dorset, it was her fifth attempt in the competition, her previous best result having been 26th in 2017. Based at Portsmouth and 17 years with First, she was clearly both shocked delighted to have done so well.

“When you are driving you can’t really tell where you’re placed. I hadn’t got a clue how I had done,” she said. Attending with one of her best friends, she said: “It’s a great weekend. I love coming here. I do like to try and swot up on the theory beforehand.” Amanda hadn’t yet decided what to do with the cash awards totaling £1,600: “I might pay off the credit card, I might do something fun, I might treat my husband to a holiday,” she said.

For the driving tests, drivers had to imagine that they were in the employ of the Middle Walk Bus Company. They had to follow the company’s policies as laid out in documents provided and pay heed to a list of driving requirements laid out beforehand. There was also a very difficult driver knowledge test paper, marked out of 200, that had to be sat in one of three sessions at the hotel. A successful breathalyser test was another requirement.

For the road section, starting from the rear of the Metropole Hotel (where the trade display is situated at the UK Coach Rally), the test route ran North along the Middle Walk of the promenade where a series of precision tests were laid out for each driver to negotiate. After this, drivers had to cross the tram tracks and turn left before rounding a roundabout and returning along the top section of the Promenade, past the Grand Hotel, and returning to the start area. Tests were designed to show their skills in bus bays, at bus stops, when turning left and right, in checking the bus before duty, in regard to other road users such as cyclists and also precision in the placing of the bus.

Members of the public were encouraged to participate by travelling on the buses during the tests and I took advantage of this several times. Though each of the drivers I travelled with seemed to me to be driving faultlessly, they were not among the highest placed competitors, illustrating how high the overall standard was, how exacting the requirements are and how narrow the gap between success and failure is.

This year’s total of 82 competitors is fewer than for some previous years, a result, I was told, of the Arriva Group’s disappointing decision not to play any part in the event, running its own competition instead.

The standard of vehicles made available for the competitors to use was very high indeed. The overwhelming majority of them were double-deckers, though there were a few single-decks. The Sunday was the first day of the new 69 registration plates and Stagecoach Manchester somehow contrived to have two Enviro400 MMCs carrying them among its contingent. 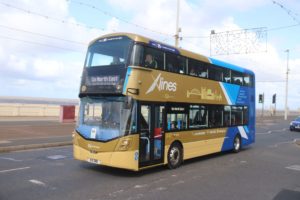 Some buses had travelled long distances to be there including three from Lothian, one from Dundee and one that had come across the sea from the Transport for Ireland fleet. ADL also made an Enviro400 MMC from its demonstration fleet available. I think the oldest bus used was a 59-plate ADL Enviro400 in Ribble Timesaver livery as part of Stagecoach’s celebration of the Ribble centenary. It is a far cry from the days when the vehicles provided were often not of the highest standard and on occasions broke down.

Recognising the efforts made by the bus donors, three vice President’s plaques were awarded, though judges Chris Heaps and Mike Morgan found it very difficult to differentiate. In the ‘up to one year old’ category the prize went to the ADL Enviro400 City of Go-Ahead’s Bluestar fleet. In the one to five-year-old category the victor was the Wrightbus Borismaster (New Bus for London) of RATP Dev that had last year won the ‘up to one year’ category, while the ‘over five year’ trophy went to a National Express Explore Dundee ADL Enviro400 in a rainbow livery promoting Dundee Pride.

Financially supporting the BDOY are a number of corporate, individual and union sponsors without which it would be impossible to stage the event. They fall into Platinum, Gold, Silver and Bronze categories, on top of which there are those sponsoring the awards to trophy winners.

Extremely well organised and with stewards on the course to ensure that any issues arising are swiftly resolved, the Bus Driver of the Year Final does credit to the industry. It is always encouraging to see an event that operators, manufacturers and the Unions can unite to support, that not only recognises a body of people who are crucial to the success of the industry but also encourages members of the public to participate and see for themselves how high the standards being set are. Anybody witnessing the proceedings in Blackpool over the weekend can only have come away with a positive impression.

The last of a number of high profile events staged in Blackpool during the year, The Bus UK Driver of the Year Final is a truly national event, drawing competitors from the length and breadth of the UK.

From small beginnings in 1967 involving those members of Coventry Corporation’s driving staff who had achieved an accident-free record the previous year, the event has evolved and grown with the purpose of ‘raising the standard of driving and passenger care through pleasurable competition while promoting a pride in the job.’ Supported by all but one of the major bus operating groups, including ALBUM, and a formidable line up of sponsors, it offers drivers the opportunity to compete for trophies backed with significant cash prizes.

Not only are there first and second place prizes for employees of each of the groups, there are national awards for England, Scotland and Wales, a prize for the best score in the theory test, and cash and trophies for the top five places. All of the competitive elements are contained within the Sunday, while Saturday evening is given over to a Gala Dinner at the town’s Grand Hotel.

Supplementing them for the competition are National Stewards, Mike Grant, James Powell and newly appointed Mel Holley. Clerk of the Course and Operations Director is Keith Fieldhouse assisted by Dave Williams. The written test was drawn up by Paul Martin.

The scoring in full