Last trip of the year

Ready for Christmas? Maybe the Editor’s annual short story will get you in the mood….

A cold snap which had hit the Yorkshire Dales had been the perfect backdrop for a Christmas shopper, thought Geoff. The old girl was running like a Swiss clock as he headed for home.

Geoff loved a Christmas shopper, and this was the fifth and final one of the year. It was always a good bunch of people, picked up in the chain of villages which lay along the valley from Masham to Harrogate. Originally, he’d planned just three to the Christmas Fayre which ended on the second week of December.

This year, all three trips filled in no time, so he advertised for a simple Christmas shopper in Harrogate on his Facebook page a few days later, more in hope than expectation. To his surprise, the seats filled fast on that, so he’d tacked on a fifth, on the last Saturday before Christmas. Remarkably, that had pretty much filled, too. One small group of friends had been on every trip. But of course, nobody had been keen to drive it, so he’d got behind the wheel himself. 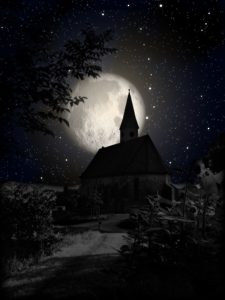 The day was a better one, too. The drizzly December had made way for some fog and frost which, that morning, had left the trees covered in rime, looking like shopfront decorations. The fields looked like an iced cake, and here and there, pockets of mist still hung like a veil over the river. Thankfully, the roads were gritted and good, so the ride down was easy, pulling in along the way to welcome the shoppers aboard.

The return journey had been delayed a little. A couple on the trip had not noticed the time, but at least had the presence of mind to call Geoff to let him know they’d be half an hour late. Geoff’s policy of giving everyone his business card as they disembarked had often paid off like this. He didn’t even mind if they called him for tourism tips.

As he headed north along the convoluted but familiar route, the chatter of customers behind him, and with another £500 in the bank, he was feeling chipper. Tomorrow, he would lock up the yard and head off to spend a few days with his daughter and his grandchildren in Leeds, and he was really looking forward to it.

It was dark now, and the frost sparkled like the glitter in a snow globe, the going slow as it always was along these country roads. And then it happened. A red light popped up on the dash and in no time at all, the coolant gauge needle headed steadily right towards the red. Geoff needed to pull over.

He was familiar with the road, and knew there was a right turn down a lane just a short distance ahead. He’d swing down that minor road, hoping he’d be able to turn to get back out, and investigate. He was pretty sure the engine had thrown a belt. First, he brought the microphone down from above his head.

‘So sorry about this folks, but we are going to have to make a short stop. Nothing to worry about, but I have a technical issue.’

Ahead, the right turn sign was caught in the headlights. It read ‘CHURCH.’ Geoff slowed and swung the coach down the fairly narrow lane. Dead ahead, on the left, was the small church with a pull-in next to it. Tailor-made, thought Geoff, as he brought the coach to a standstill. As he glanced in the mirror, things didn’t look good. He could see a plume of steam caught in the brake lights. He switched off the engine.

He had the full attention of his group as he stood in the aisle: ‘It looks like we have an overheated engine. I’ll just take a look and see what I can do.’

When he popped the engine cover, the problem was obvious. A coolant hose had split, and from the smell coming back at him, he’d lost most of his water. He cursed his luck, then realised he’d done so loudly by mistake. He headed back on to the coach.

‘Just an update,’ he said. ‘One of the radiator hoses has split and the engine has overheated. I’m sure I can get someone to collect you all and get you on your way soon. In the meantime, I’d really appreciate a little patience.’

There were some smiles and a couple of thumbs up from the group. Geoff suspected those were the people who’d been drinking. He popped the mic back in the hole and got out his phone. There was no signal. So he got off the coach to see if that would bring up a few bars. It didn’t. This was a bit of a problem. Then he noticed that there was a light on in the church and thought he could dimly hear the sound of a church organ. He headed to the door, past the St Winifred’s Church sign, to find out.

He turned the huge iron hoop on the latch and the heavy door swung slowly open. St Winifred’s was lit brightly, and from the chancel end, a voice said ‘Can I help you?’ Geoff then spotted the vicar, standing next to the organ.

‘I do hope so vicar,’ said Geoff, and walked down the aisle towards him. The old church was looking festive, holly wreaths and bright paper chains made by tiny hands draped the walls. Silvery angels hung from the lights overhead. There was a big Christmas tree glittering to the right.

‘My coach has broken down and I can’t get a mobile phone signal to call someone to help. Do you have a landline here?’

‘Of course,’ said the vicar, then offered his hand. ‘I’m Richard Jones,’ he said.

‘That’s me,’ said Geoff, as he followed the vicar through a small door into the vestry.

‘One or two of my parishioners travelled with you and spoke very highly of your company,’ said the Reverend Richard Jones.

‘I probably know them,’ said Geoff, as he was pointed towards the phone on the wall.

‘I’m afraid that would be ‘I knew them,’ said the priest. ‘They passed last year, very sadly.’

Geoff had picked up the phone but then put it back on the receiver. He remebered two ladies who he picked up from the bus stop opposite the turning: ‘Would that be Glynis Woodhouse and Jean Crift?’ said Geoff, getting a sad nod from the priest. ‘How sad. I did wonder why I hadn’t seen them lately.’

The pair were respectfully silent for a moment. ‘Make your call,’ urged the priest. ‘You won’t want to keep your passengers waiting.’

Geoff called his fitter, Tony first, and explained the predicament but Tony was in the pub and he’d had a couple of drinks: ‘Sorry Geoff, but I can’t risk it.’ There was a couple of seconds’ pause, then ‘Tell you what. I’ll call Alan at Easy Coaches and see if he can come out to you with a coach. If he can, I’ll get ‘er indoors to run me down the garage for some tools and come out with him.’

‘Cheers Tony. I can’t thank you enough,’ and Tony said, as he always did, that it was no trouble. ‘I’ll call you back when I have a plan, Geoff,’ said Tony, and hung up. Geoff was genuinely humbled. It was at times like these that he felt lucky to have such good people around him.

‘I’m so sorry but I have to get back to the organ. I have a choir practise tonight. They’ll be here in a few minutes,’ said the priest.

Aboard the coach, it was getting very cold. Most of the passengers had retrieved their coats from the rack. Geoff explained the plan to them, and they seemed in good cheer. But he realised that he had no way of keeping them warm. He sat with them for 20 minutes, hoping the radio would keep them cheerful, but then he thought of Plan B, and headed back to the church.

As he opened the door, the sound of singing came back to him. The small choir had arrived and were in full song, arrayed along the chancery. He headed quietly and respectfully to the pews, and waited for Good King Wenceslas to conclude before giving a wave to the Reverend Richard Jones, who, stood up, excused himself to the choir, then left the organ and walked over.

‘I’m just wondering, vicar, if it’s possible to bring my group into the church. Only the coach is getting really…’ Geoff didn’t need to finish his sentence.

‘Of course, of course. They would be so welcome to come in and keep warm.’

As the choir resumed their practise, Geoff headed out to the coach. Climbing aboard, his passengers had donned coats. ‘I can’t have you all shivering on here. Another coach will be on the way soon, but in the meantime, the vicar has said we can keep warm inside the church. But…’ cautioned Geoff as everyone stood ‘…it’s choir practise, so we need to keep the chatter to a minimum.’

The passengers filed off the coach and into St Winifred’s, passing down the pews and settling down. The choir was between carols, and turned to face them, smiling, and mouthing ‘hello.’ The vicar issued new instructions, the organ piped up and Once in Royal David’s City filled the church.

Geoff had always said managing coach groups was ‘like herding cats’ and sure enough, one or two of the passengers seemed unable to resist the urge to join in with the carol. Their neighbouring passengers shushed them. A few of the others were surreptitiously nibbling treats they bought.

The Reverend Richard Jones lifted himself from his organ stool, muttered something to the choir, then walked towards the pews. Geoff was about to apologise for the disturbances but the vicar got there first.

“We’re so pleased to have you here with us; the church should be a place of shelter and comfort and it’s an honour. Now, I must apologise for the heating, which isn’t the best. I wonder if some of you would gain some extra warmth from joining in with the carols? I find it VERY therapeutic.’

There’s no holding this lot back, thought Geoff as a ripple of ‘Oh yes’ and ‘Lovely’ answered the vicar. ‘It’s Silent Night next,’ said the vicar. ‘You’ll find it on page 56 in front of you.’ Pages rustled, the vicar held a G on the organ for a second, and they were off. This lot were, thought Geoff, surprisingly good, as the church filled with human voices.

If anything, they got better with Oh Come All Ye Faithful, and during Hark the Herald Angels Sing, Geoff heard a few good harmonies creeping in. Then, during God Rest You Merry Gentlemen, two booming male voices at the back brought even more depth to the largely female congregation. Geoff glanced round, to see his slightly-inebriated mechanic and Alan from Easy Coach joining in.

By now, the church had warmed with the mood. The final carol, We Wish You a Merry Christmas, was a belter, with everyone in full voice. As the last note of the organ died, the choir launched a round of applause to Geoff’s passengers, and they reciprocated.

What a perfect start to Christmas, thought Geoff.