Is hydrogen the answer?

Are hydrogen fuel cells the answer to extending the range of electric vehicles? The Alternative Fuel Manager, Lewis Anderson, of Luxfer Gas Cylinders – supplying ADL and Wrightbus – explains the pros and cons

While diesel buses still have their place – if they meet Euro VI standards – other technologies have to be explored and considered. The Government’s ‘net zero by 2050’ announcement means the UK in the vanguard.

“Hydrogen has been a viable alternative for mass transport for more than 15 years,” says Lewis. “The Hydrogen Council claims there will be 50,000 hydrogen-powered buses and 350,000 trucks on the world’s roads by 2030.

“While both hydrogen fuel cells and batteries produce electricity to drive electric motors, cutting harmful emissions when compared with a diesel-only engine, a battery requires hours for a full recharge. A hydrogen fuel cell can be refuelled in less than five minutes – just like petrol and diesel vehicles, but in a cleaner way, and with no risk of leakage.”

Compressed hydrogen also has more energy density than a battery which, along with the lightweight nature of the gas, means it can power vehicles for extended ranges without adding weight.

“Depending on the duty cycle, a hydrogen fuel cell PSV could spend longer on the road than an electric bus, which may need to return to its depot to be recharged for hours. A hydrogen bus could be refilled during its journey in less than ten minutes, making it a win for the fleet operator and a sound business model.”

In 2018, Luxfer boosted its production of hydrogen systems to meet increased customer demand, as users such as TfL and Wrightbus invested in the technology. In May 2019 TfL announced an order of 20 hydrogen double-deck buses amid the London launch of the world’s first Ultra Low Emissions Zone. Manufactured by Wrightbus in Northern Ireland, they will all feature Luxfer systems and will help the capital go green when they begin serving major routes next year.

The appetite for a cleaner, greener transport solution is spreading north of the UK too. Liverpool will deploy H2 buses from 2020, as the first city in northern England to adopt the technology. Luxfer cylinders will be installed on 25 Alexander Dennis vehicles as part of the Arcola Energy H2FC system, following a funding win from the Office for Low Emission Vehicles. 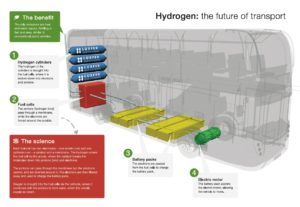 One of the biggest potential barriers to the expansion of hydrogen for passenger buses is a lack of infrastructure. At present, it is up to the individual fleet owner to invest in a hydrogen bunker for the depot… and that’s a big ask, says Lewis.

“For coaches travelling on longer routes it simply wouldn’t be possible. A public hydrogen fuelling station en route is necessary – and there’s not enough of them.”

“Developing alternative fuel-powered buses is the right thing for helping us all hit environmental targets, but there needs to be systems there to support them. And while the UK is within the top five in Europe when it comes to leading the adoption of hydrogen-fuelled buses and coaches, the infrastructure in place here is better suited to support battery-powered vehicles only.”

The reality, says Luxfer, is that it’s up to local authorities and policy-makers to drive it forward now and invest in the infrastructure to support the mass adoption of hydrogen-powered electric transport. If that happens it will be truly transformational for the industry and the ongoing battle to go green.

Luxfer says there will always going to be a question around the safety of using cylinders because they are high-pressure products.

“Safety is critical to our operation at Luxfer, and we have a robust set of systems for testing to ensure the integrity of our products,” said Lewis Anderson. “Hydrogen, of course, is a flammable gas but that’s exactly why the manufacture of the cylinders is so well controlled.

“At Luxfer, we manufacture the lightest and safest Type 3 aluminium-lined cylinders, on the market. We test our cylinders at the maximum pressure – higher than the service pressure – to ensure they will not fail according to EC 79 regulation in Europe.

“We’re working to educate customers and end users on the safe operation of hydrogen but what’s important to realise is that safety is not the real issue here – it’s the lack of support and infrastructure for the take-up of hydrogen-powered vehicles.”