Can there be any logic in choosing a new 80-seat coach which retails at £240,000 for high-capacity hires to schools and the like? We road test Irizar’s i4 in tri-axle form

I first went to Marshalls Coaches of Leighton Buzzard some 20 years ago or more, when Fred Marshall was master of all he surveyed.
The occasion was the delivery of an entire fleet of new Beulas Eurorider coaches which, at the time, were the coaches with the ‘wow factor’ and, if I remember correctly, leather headrested seats. The last word in luxury.

I asked Fred how the coaches would be used: “For everything,” he said. “Except schools?” I queried. “No, including schools. We’ve noticed that although the kids vandalise our older vehicles, they seem to appreciate a new coach, and we rarely get any damage.”

It seemed pretty forward-thinking at the time, so to be here again at the smart yard boarding £240,000-worth of 80-seat Irizar i4 Integral aimed specifically at schools should not have been a surprise to me. Although the vehicles will be put to many other uses, especially for short-range transfers of any large group, Glen Marshall, Fred’s son, is cut from the same cloth. 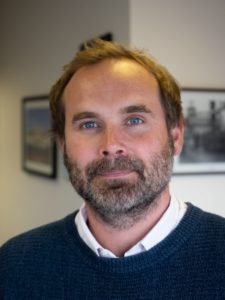 The growth in the market for high seating capacity without recourse to double-deck buses and coaches is growing, mostly satisfied by converting used coaches to 3+2 seating, but it goes up a notch when considering buying new for work which you’d think would be at the lower end of the margins scale.

That’s not the case; most operators quoting for groups of 60 or more sensibly increase the price and, theory goes, as running costs weighed against a 57-seater are more or less the same, there’s a price premium to be had here. That’s certainly how Glen Marshall and our very own ‘Coach Stig’ see it in their operations, and serving a premium price with a quality vehicle is less likely to elicit a price/quality analysis from the hirer.

The work tends to be short-range transfers which don’t involve luggage, and that’s as well because low-height coaches like the i4 aren’t imbued with large lockers. Marshalls Coaches has indemnified itself against the possibility of sports groups and brass bands booking the two 80-seaters it has bought by adding a large ski locker to the package, though a trailer might be another possibility; and as Coach Stig says, towing a single-axle 750kg or less trailer is within the D licence conditions.
So what’s the i4 Integral solution like? We boarded one of Marshalls’ at Leighton Buzzard and had a quick ride to find out.

The i4 has, I think it’s fair to say, been a marginal seller with Irizar UK, the i6 ruling the roost. But it has its devotees and, as it’s actually the same floorpan and running gear as the i6, offers the same kind of performance. 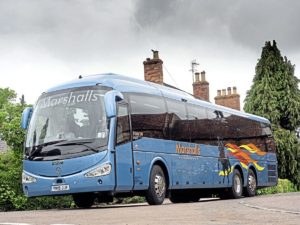 You’ll be familiar with the exterior appearance of the i4, which has hints of the Irizar family but is 3.2-metres high. This tri-axle 13.6-metre variant has, like its two-axle sisters, a centre door and an almost flat floor throughout, which aids upseating to this capacity.

The immediate feature which catches your eye is the significant rear overhang on this extended vehicle. Other than that, it’s an i4 and finished to a very high standard by Irizar, with even and narrow shut gaps between the panels, quality factory paint and a little of the ‘wow factor’ operators seek in this Spanish coach.

Locker doors are spread along the nearside, including two which let into the main luggage compartment; it’s not huge (compromised additionally by the rear-steer axle) but there’s another space suitable for, perhaps, driver’s luggage and extra AdBlue just ahead of the rear axle over the air tank and just in front of the AdBlue filler cover. The rest of the hinged lockers access fuseboards and other componentry. 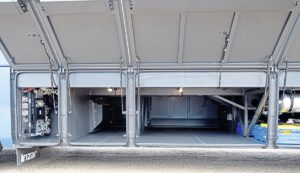 It is worth mentioning the quality of the locker doors; not the flimsy, floppy things some 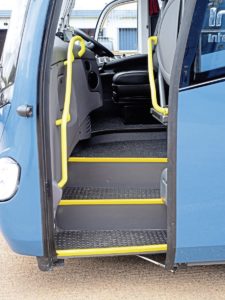 budget coaches have but solid doors, perfectly balanced with gas rams, which close with a clear and satisfying thump, not a clatter. The same is true of other covers, such as the bonnet cover over the screenwash (the catch accessed via the offside fuseboard locker).

The 900mm passenger door is a three-step affair to driver level and another two to the aisle, with good grab rails each side. There’s no courier seat, of course. On the offside of the coach, the emergency door opens to deploy a chequerplate step, which makes it usable in extremis. A continental door is available on the two-axle 12.9m, and a wheelchair lift can be fitted here.

At the rear, the engine bay is fully lined with foil-backed sound insulation and the MX11 engine sits in plenty of space to allow technicians good access to serviceable components. Above the engine bay are the skibox mounting points, covered with blanking grommets. The skibox itself was on its way from the manufacturer at the time of our visit, very shortly after delivery of the coach.

The driver cab is, again, familiar territory and the switchgear placed logically. This coach has the ZF EcoLife automatic gearbox, so it’s suitable for any driver to hop aboard and drive. 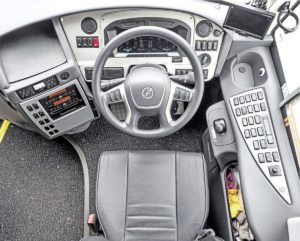 The multifunction steering wheel has audio controls and channel change on the left, limiter and cruise controls on the right. The retarder lever is to the right, wiper controls left. Either side of the LCD binnacle are what we might term the ‘chassis controls’ (though this is, of course, an integral coach) and the coach interior switchgear is on a panel to the right next to the handbrake.

The driver has his own USB charging point, cupholder, ample stowage for manifests, under-seat safe, etc, while Marshalls had added an Actia CCTV reversing camera screen and the coach has additional CCTV inside and out – vital in this market sector, if not generally these days. 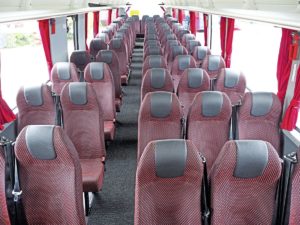 The passenger saloon is what this vehicle is all about. The 3+2 seating pattern is impressively spacious. The choice of PPS Buckingham seats with flat-weave fabric and leather headrest – clearly lightweight and simple, with a deeply-indented squab and back rest – has influenced this strongly, leaving sensible aisle width without the seats themselves being cramped for the average passenger. Our test driver did, however, feel a seat with a flat back rest might have been better for adult passengers.

The coach floor is only virtually flat, with an inch or two intrusion of the wheelarches front and back, but this is cloaked by the seating pattern, which manages to feel spacious. There are some compromised seat views, particularly either side of the ‘jump’ door. If you get a few ‘wider’ passengers, direct them to the rear five seats, which are significantly bigger. The rear two seat rows are a small step higher and the rear seats are on a raised platform. 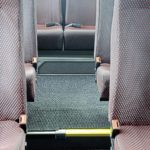 Legroom isn’t really an issue, though seat pitch either side of the centre door was nudging the limit. Generally the legroom is on a par with the 57-seaters of yore.

Above the seats are full-length ‘hat racks’ with bracing supports which also help prevent ‘handbag slide’ under braking: I’m starting to sound a bit obsessive about this, I know, but passengers having their baggage slide forward to the people in front during a downhill braking manoeuvre must surely be irritated by the unfettered ‘piste’ of some luggage racks. At each seat station there’s an adequate if unfussy passenger service unit. I have to say I think this target market will be craving USB sockets and, in this vehicle, the parcel rack is where I’d have them fitted.

My chief concern with the i4 was the closer proximity of the engine to the floor level, but it seems Irizar was ahead of me, possibly with the sound-deadening or other noise abatement engineering. 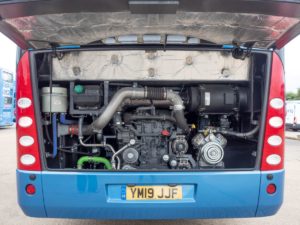 The interior was very quiet indeed, with just the rumble of the engine accompanying passengers, even right at the back. There was no transmission noise at all. The seats opposite the jump door have a tiny bit of road noise to contend with but even conversation would drown it out.

The Coach Stig did point out some wind noise at the front, which appeared to be generated by turbulence around the relatively short mirror arms. It certainly didn’t come from the door or windows. Again, it was 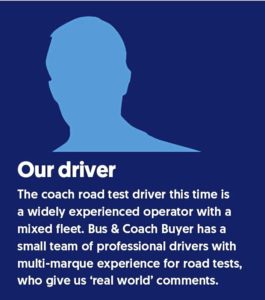 present but not intrusive.

As for the performance, it was excellent, Marshalls having specified the 408bhp MX11 engine as an upgrade over the 367bhp standard 10.8-litre straight six. The view for the driver was OK in most respects though he did remark that the shorter mirror arms had him looking in the wrong place for them. He also thought the nearside mirror with three mirror glasses might have been better with just two; one a much larger piece, to take in a better view of the side of the coach. Incidentally, the mirror arms extend only marginally further than the screen so won’t get clouted on a tight turn.

So what about that lengthy rear overhang? It didn’t give our experienced driver any issues at all, though he said he was always conscious of it. The view in the mirrors was good and additional marker lights helped keep it and the rear-steer clearly in view. After a little turning circle test in Marshalls’ yard, the coach was more than capable of being cleanly parked. Irizar gives the turning circle as 24.6 metres – only half a metre or so more than the two-axle 12.9m, which seats up to 70.

Operators know the base of this vehicle very well, as it’s a platform shared with the i6 Integral.

If you’re already a DAF devotee, you’ll know the MX11 is fairly quiet and efficient: “We’ve run DAFs before, and they’ve been brilliant for economy and reliability,” Glen Marshall told me. The ZF EcoLife is likewise well-respected.

The saloon is well structured and the coach well made, with only one small rattle which turned out to be a loose fastener on one of the air conditioning screens on the ceiling which was tightened.

The i4 comes in 12.2m and 12.9m, or even longer versions if factory ordered, with 2+2 seating and a sunken aisle, but its purpose is clear; a low-height workhorse for high seating capacity. Which kind of leads us to question the concept of buying a new 80-seater instead of a ‘decker or upseated, used conversion – or indeed a cheaper marque of coach, since there are 3+2 options out there.

Clearly, getting into low-emission zones is a big bonus. Reliability and warranty have a value, as does the style and quality of the interior. On three axles, the i4 will never suffer any weighbridge embarrassment, but there’s something else; a list of letters. It goes like this; ACC/ECAS/EBS/ABS-ARS/ESP.

Those letters add up to modern safety standards, with systems which protect your coaches and your clients. Most of your customers’ cars won’t have such an array of safety systems aboard, so I suggest that this is something worth marketing. If you want to bat away price competition, the i4 (or any new coach) needs upselling.

For a high-capacity coach, the i4 is the state of the art. I’m sure Marshalls will be taking every opportunity to use those systems to market this coach to schools and other clients, because when they travel on it, they will know the difference.