Greater Manchester’s newest bus operator Go North West (GNW) has announced detailed plans to spend £3 million in its first 12 months, primarily on vehicle and depot improvements. With priorities focused on improved reliability, customer service and local leadership, the company unveiled a refurbished double-deck hybrid bus at an official launch event which was held inside the Museum of Transport in Manchester, which is conveniently located next to Queen’s Road depot. 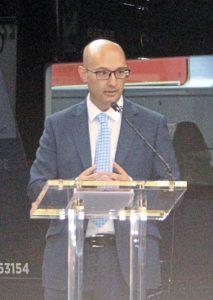 FirstBus announced in February that it would be breaking up its Manchester operations, and that one of its three depots (Queens Road in Manchester) would be sold to the Go-Ahead Group for £11.17m. Since then it has recently announced that its Bolton operations would be sold to Rotala, minus the ‘Vantage’ services and vehicles which would be relocated to Rusholme depot. The fate of First’s largest depot and head office in Oldham remains the subject of speculation, with the most recent suggestions being that it would not be sold just now.

The transfer of operations took place on 2 June, with 530 staff transferring, and a total of 177 buses being taken over, including a number of Optare vehicles owned by Transport for Greater Manchester (TfGM). Twenty services, including the two Manchester central free bus services as well as five school routes, were transferred. Various ticketing arrangements have been made by both operators to accept each other’s tickets for the time being.

Interim directors were brought in to start up the operation. Managing Director David Cutts came from Go-Ahead London as did Operations Director Angie Ryder. Engineering director Robert Watson came from Go North East. Nigel Featham has already been appointed as the new Managing Director and will start at the beginning of September, and further appointments for the other posts will be announced soon.

GNW displayed the first of 14 seven-year old hybrid-drive double deckers to be completely refurbished by Thorntons of Ashington. This involved painting new panelling, new seating, flooring and the company’s interior paint scheme. The vehicle was then retrofitted with an Eminox exhaust system, bringing the bus to Euro VI engine standard. A single-deck Wrightbus was also displayed, which was the first to have been repainted by ADL Plaxton. 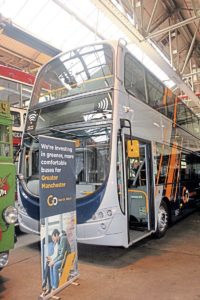 GNW also announced it has started work on replacing all its 15-year-old Euro III single-deck buses with 24 newer ones – equating to half of the single deck element of the fleet – between five to seven-years of age. Ten ADL E200s are being prepared for service, and 14 Volvo B7 single-deckers will be sourced, many of them coming from Plymouth. 33 deckers will be retrofitted to Euro VI, with grants from TfGM, and the pace of further improvements will be dictated by TfGM’s ability to secure Government funding for further conversions.

GNW has invested in resources aimed at improving service reliability and creating local management and customer service teams to operate from Queens Road. Additional service controllers and more inspectors on the road are monitoring reliability, and while the existing network is being operated at present, moves are being made to undertake a rigorous analysis of services to adjust services into areas where people are not being served well enough.

In addition to its immediate fleet proposals, GNW set out its longer-term vision, highlighting progress to date. David Cutts, GNW’s Interim Managing Director, said: “Queens Road has served the city for over a century and we are very pleased to have seamlessly transitioned to GNW. Today is another important milestone and the communities we serve, whether they use the bus or not, will benefit from our ongoing investment in cleaner vehicles. In addition to introducing greener buses, we recently purchased a new bus wash and repaired the iconic depot clock, helping us keep to time! Colleagues and users can expect further announcements over the coming months.”

David Brown, Go-Ahead Group Chief Executive, said: “We are delighted to have begun serving customers in Greater Manchester, and are committed to growing bus use, helping tackle road congestion and improve air quality. We are pleased with the welcome received by our colleagues and customers, and the new team at GNW are working hard to improve services. We have an ambitious investment plan, and are excited to work in partnership with local stakeholders to serve the community”. 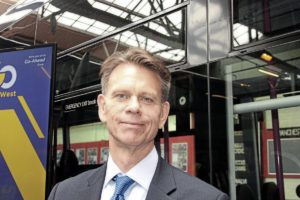 The Group launched a 16-page strategy document in London last week, with many MPs signing up to support it. The document makes recommendations which require no additional legislation, and says that despite 3.5m people in the UK travelling to work by bus, and around two-thirds of all public transport journeys being by bus, there is no national framework for effective delivery of local solutions.

It quotes a 12% fall in passenger journeys in England (outside London) since 2008/09. It highlights that since 2010/11 there has been a 46% cut in funding for local authority supported services in England, severing whole communities. It says that 25% of households have no access to a car (50% of workless households), and that 73% of bus journeys are made by people in the bottom half of income.

It says that congestion in the UK’s largest cities is 14% worse than five years ago. A 10% decrease in bus speeds can reduce patronage by 10% or more. Increasing average speeds at peak times could also significantly reduce bus emissions.

The document quotes a few examples of Go-Ahead’s successes in raising patronage such as 8.3% in Brighton since 2012, 18.8% in Bournemouth/Poole since 2011, and 25.8% in Southampton since 2011. It also illustrates examples of successful Quality Partnerships, and bus priority achievements.

Mr Brown said that buses were about local communities, and were well-managed through the devolved structure of the Group. “We have huge optimism for the future. We want to tackle congestion. We are passionate about air quality and are the biggest users of electric buses. Even a Euro VI bus has less emissions that a Euro VI car. We will not purchase new diesel vehicles after 2025, and will have a zero-emission fleet by 2035.”

He emphasised the partnership approach. “We absolutely need to work with local authorities, and there are some pretty good conversations going on. We need central government help in getting people to work together, and we have to be ahead of the game in operating buses.

Underlining the commitment to new technology, he illustrated the Southampton air filtration bus which cleans the air around it and in its first 100 days removed particulates the size of a tennis ball – with a further nine buses being ordered. He also emphasised the cutting edge ticketing technology being introduced around the country, and how demand responsive buses in Oxford had already recorded 140,000 journeys.

“Buses are vital for getting around, as well as tackling loneliness and improving social contact. We thank TfGM for all their help, and believe that success will come from local leadership and local partnerships” he said.

What a national bus strategy should prioritise 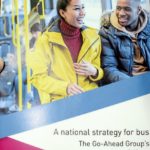 Put buses at the heart of planning for schools, housing, town centres and social services. The affordable, inclusive and accessible transport provided by buses can form an integral part of tackling challenges such as loneliness, obesity, air pollution, social exclusion and sustainable growth. In doing so, costs can be saved elsewhere. Enabling buses to perform this role, requires bus access to be considered in the planning of residential developments, and other venues. Bus operators should be statutory consultees on planning applications, and this can then enable financially sustainable services to operate.

Encouraging flexible, collaborative partnerships, between local authorities and operators across the UK, to tackle the variability in provision for quality bus services. Partnerships with local authorities, that are collaborative and retain commercial freedom to respond to changes in customer demand, can enable patronage growth. We advocate a joint understanding of broader economic development and social priorities for councils, and how the bus can help deliver on these areas.

Challenge local authorities and bus operators by setting demanding targets for passenger numbers and journey times. A national framework with targets for patronage growth could enable delivery at a local level. Local authorities could then target journey times with bus operators and be incentivised to adopt relevant local solutions. These should be linked to future Government funding through Transforming Cities funding to ensure that the most effective solutions are developed.

Accelerate the shift to ultra-low and zero emissions vehicles to improve air quality for all. Central government needs to provide a framework and local authorities need to step up on deliverable programmes that support clean air zones. These can be linked to demand management schemes that raise revenue. In the short term there needs to be continued investment in new and retrofitting ultra-low emission diesels.