The latest Government figures released show coaches as being by far the greenest mode of transport in every aspect, including the carbon cost of building the vehicle.

The statistics dramatically show the huge reduction in emissions in 2020, when the pandemic lockdowns went into operation but also amplify the supreme position occupied by buses and coaches in any drive to reach Net Zero, regardless of the fuel used. They also reveal the massive impact of internal flights on greenhouse gas emissions (GHGs).

The government figures look at the emissions for typical passenger journeys of varying distances, and take into account not only the GHGs created by fuel, but by manufacture and indirect emissions, such as water vapour, aerosols and nitrogen oxides. Unequivocally, and acknowledged by the report, coaches offer huge potential for resolving emissions.

An example journey from London to Glasgow shows each passenger on a plane creating 157kg of Cos (and equivalents), with cars and motorcycles around 90kg, trains and electric cars at 26-28kg and the coach at 22kg – the lowest emission of all transport modes in all examples. Counterintuitively, train travel rises up the rankings to second, just below planes, for a journey from Leeds to Belfast. 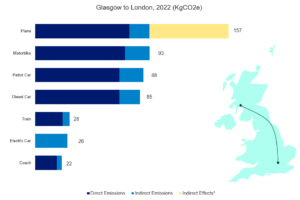 A typical urban journey between Croydon and Wimbledon shows diesel ‘black cabs’ the most polluting, and the Tramlink service unsurprisingly the lowest, though almost on a par with electric cars.

The broader picture since 1990 is that emissions from the energy sector have fallen by two thirds, but only small reductions in emissions from all other sectors. Transport emissions have risen slightly since 1990, largely due to increased car use. Transport is now by far the highest sector for GHG emissions in the UK – well above the emissions of residential and business premises, energy supply and emissions from agriculture.

For the first time, the UK’s contribution to GHGs via international shipping and aviation were accounted for. Aviation contributes 12% of emissions – and since 1990, emissions from international aviation had doubled by 2019.

The report notes that, despite large reductions in emissions of NOx and particulates – which are not GHGs but have health impacts – levels of particulate matter are still high due to brake and tyre wear. These two sources, it says, now comprise two thirds of particulate emissions from transport.

The pandemic saw transport emissions fall by 40% – the highest reduction on record, unsurprisingly. CLICK ON THE TOP IMAGE TO ACCESS A GALLERY OF TABLES

[bullet] To see the full report, go to https://tinyurl.com/228zrtg2