We pay a visit to Arrive Bus & Coach‘s Wellingborough site, where expansion is on the cards, together with a new parts operation.

Arriva Bus & Coach is planning a workshop expansion and more than doubling its service team at its satellite aftersales unit in Wellingborough. 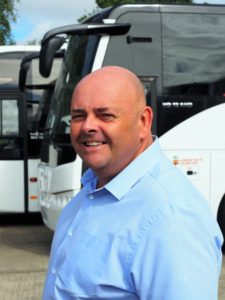 The site – which was once the HQ for Van Hool – has been an unsung hero of the operation for many years, with much easier access from the Midlands and southern England for many operators. Now, Arriva Bus & Coach is investing in the site in a bid to make it the ‘go to’ service centre – and not just for its own products.

“I think it’s true to say we haven’t really blown our own trumpet here,” Nigel Clarke, Head of Aftersales and Operations, confessed. “Some people don’t even know we exist.”

Nigel started with Arriva Bus & Coach two years ago, joining from a background managing aftersales and business development in the car sector, latterly with Fiat Chrysler. An expert marketer, he took many of those skills into managing a dealer network, and is now determined that the staff, skills and location of the Wellingborough unit get the boost they deserve.

“For some, it’s been about changing mindset – there have been casualties along the way,” he says. “What we now have is a team of technicians which I’m really proud of – people with great expertise and, as importantly, a customer focus.”

In Bus and Coach Buyer’s feature on Fenn Holidays, earlier this year, Peter Fenn volunteered a name on the eve of signing up for a fixed-price maintenance package at Wellingborough, having used the facility for many years: “I get on very well with Jason Hawkins,” he told BCB at the time. 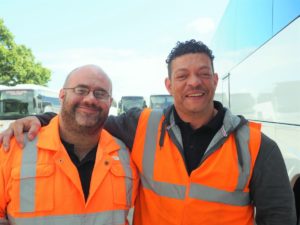 Workshop Supervisor Jason is supported by Gary Dackombe, Technician, and will be joined by two further technicians in October as a new bay is erected at the end of the current leased building. Ultimately, in the second quarter of 2020, Nigel expects to have six skilled technicians at Wellingborough.

The expansion will not be limited to staffing up. An unused, slightly cramped, bay in the current building will become a ground floor and mezzanine parts store, which will quadruple the stock level, and for a range of vehicles – not just the marques sold by Arriva Bus & Coach.

Arriva Bus & Coach isn’t exactly short of technical expertise, with nine technicians and a master technician at Cleckheaton, and support from mobile service units covering Scotland, the North East, South Wales and the South West of England and the Midlands. Indeed, it has just invested a further £60,000 in service vans with state-of-the-art interiors to help service engineers work better – even at the side of the road.

Stepping up its offering from Wellingborough chimes with its ambition to provide a genuine one-stop-shop for operators… and fast response times. 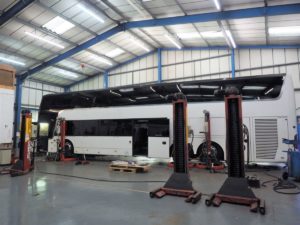 Current workshop will be extended to give a fourth bay

The expansion is underscored by other initiatives, including a new warranty process for Van Hool and Temsa products which sets out to give immediate answers when problems arise, and to not leave operators hanging on uncertain ‘goodwill’ promises.

Not only that, but Arriva Bus & Coach is seeing rapid growth in its fixed-price maintenance offer, which tailors a deal for each operator, some of whom want to retain elements of servicing in-house, except for tyres and glass for which, says Nigel, it defers to established specialised suppliers. It recognises that this will grow the need for technicians and parts stock.

“By the end of this year, we will have a double shift system working here which will mean we will be open from 6am to 9pm Monday to Thursday,” says Nigel. “From an operator viewpoint, this will enable really fast turnaround for repairs.” And, according to Nigel, a high standard of service.

“DAF is well-known for having an excellent network but some places are more expert with coaches than others. That can mean extended diagnosis of faults, whereas here we have people who know these vehicles inside out.”

Nor is the growth of the Wellingborough site limited to the £100,000-plus investment in buildings, staff and stock. It has also become part of the DAF TRP parts system, which offers OE and tested non-OE parts for a huge range of vehicles, all warrantied for two years or more: “We are actually the UK’s only TRP bus and coach parts specialist,” Nigel says.

On top of this, Arriva Bus & Coach has invested heavily in getting diagnostics and training so it can become an approved service agent for Cummins (which engines Temsa MD9) and for ZF gearboxes; that will happen imminently, ensuring that Arriva can ‘own’ almost every part of the servicing of supplied vehicles.

The Wellingborough site is also used for the sales and hire element of its business, with several new, stock vehicles present when Bus and Coach Buyer visited, plus a smattering of smart Temsas in the hire fleet and a fairly large number of part-exchange vehicles.

“We arrange deliveries to happen at the Wellingborough site if it suits the operator, and operators can, of course, come here to test-drive used stock,” said Nigel. Arriva Bus & Coach’s Head of Communications, Phil Hennessey, said that the sales team managed by Senior General Manager for Sales, Paul Gardner, has made huge inroads on the amount of stock in recent months.

Above all, Nigel is aiming to ensure the Wellingborough site remains as customer-focused as it is now: “I’m pleased to be investing in the site, but most of all the guys here; they deserve it. They’re enthusiastic about the work they do, and our customers notice it. They really do ‘own’ this business.