As part of Transdev’s vision to ‘Build buses back better,’ the company is investing in some very high specification new double-deckers for key interurban routes. David Cole caught up with one of them at a stakeholder launch in York
Click on the image above for a full gallery

Premium services such as Transdev’s Cityzap express between Leeds and York have been significantly impacted by the pandemic with many suspended during the two lockdowns of 2020. 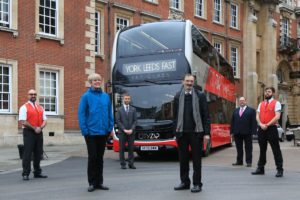 Cityzap ceased again in early November and returned re-invigorated to the streets of Yorkshire on 13 December. The new order includes some of Transdev’s recently delivered ADL Enviro400 MMC ‘Sky Class’ vehicles with enhanced customer focused specification, increased frequencies, an additional interchange point at the Amazon site on the outskirts of Leeds and embedding of the Covid instigated additional cleaning regime.

Commenting on the relaunch, Transdev CEO, Alex Hornby, said, “Cityzap changed the face of travel between York and Leeds over four years ago and part of our vision to ‘build buses back better’ in our cities is the launch of our new ‘Sky Class’ bus fleet. British bus manufacturer Alexander Dennis describes them as the highest specification (Enviro400) they’ve ever been asked to build and that was our vision from concept to reality.”

The five ADL Enviro400 MMC vehicles with Cummins ISB6.7E Euro VI engines for Cityzap are based on that model’s longest 11.5m option to maximise customer space at each of the Kiel coach seats. On the upper deck, a number of seats are provided with tables including several single seats that have armrests and a side table arrangement specifically developed for them by Transdev.

Each seat has access to a seatback unit incorporating request stop button, reading light, USB power, inductive charging dock and a coat hook. North West Trim has customised the seats with Camira moquette and leather headrests in the red and silver shades associated with the Best Impressions created brand. A Cityzap logo is incorporated into each seat edge.

A single wheelchair space is provided behind the nearside front wheelarch and, under normal circumstances, four standing passengers would be allowed. Under current restrictions, the maximum capacity is 40 passengers with the advice of this consistent in style with other notices on the vehicle. Other pandemic related changes include a drivers screen with minimised access to the Ticketer ticket machine and card reader.

The space above the nearside front wheelarch has been utilised to install a twin stream waste bin allowing customers to separate recyclable materials and a shelf for Cityzap’s book club. There is also a hand sanitiser dispenser and the lower deck information screen as part of McKenna Brother’s comprehensive audio-visual and destination display system in this area. Local personality Paul Hudson, the weatherman on BBC Look North, has voiced dedicated customer messages for Cityzap and the screens will display forward rail and bus connections at key interchange points. Wifi by Icomera is available throughout the vehicle.

The choice of colours and materials creates a bright and inviting interior, enhanced on the upper deck by three large glass skylights that Transdev say “will let in the Yorkshire sunshine and provide a view of the stars at night.”

Transdev has also introduced a further 14 similarly equipped ‘Sky Class’ vehicles to build back better the Witchway branded express routes linking Burnley and Rawtenstall with Manchester. Best Impressions has created a new black and orange image for these vehicles and the voice of TV soap star Jennie McAlpine features in their on-board announcements.

Prior to the service relaunch, one of the Cityzap vehicles was shown to stakeholders in York, outside the city’s Grand Hotel. It met with a positive response from the city’s councillors who have been at the forefront of establishing it as low emission orientated and public transport focused city.

Executive Member for Environment and Climate Change, Councillor Paula Widdowson spoke of the city’s voluntary CAZ established early in 2020 which applies to all buses entering the city on more than five journeys a day and described the bus companies as “being brilliant in ensuring that we can deliver on what we said, passengers love it and the city loves it.”

The city is also investing in electrifying its own commercial vehicle fleet and has a number of projects in hand that will benefit public transport, particularly the transformation of the station forecourt area to remove redundant infrastructure and create a better public transport interchange.

Operating every 30 minutes on weekdays and hourly on Sundays, Cityzap provides a fast link between York and Leeds, running non-stop between the cities’ boundaries. It is operated by a dedicated team of drivers based at Transdev York’s depot who are provided with brand specific clothing supplied by Murray Uniforms.

As well as its own range of individual and season tickets, through ticking is available with other Transdev services out of York and Leeds including the recently relaunched FLYER shuttle to Leeds-Bradford Airport. Through ticketing is also offered for National Express and Megabus customers via Leeds.