Are we nearly there yet?

The upward trajectory of electric buses in inner-city environments now seems set, but what are the alternatives? Mark Williams tries to get to grips with a cloudy crystal ball…

The CENEX Low Carbon Vehicle exhibition a few weeks ago is a show which has grown from being a handful of hopefuls in the field, touting what appeared to be a fantasy, to a large show of well-funded tech solutions.

At my first show at Millbrook, I remember being aware that the exhibitors were mainly inventors, not manufacturers. Now, what we see are practical electric drivelines in series production, backed by international companies. And this is just the start.

The replacement of the internal combustion engine and its infrastructure is going to take a couple of decades to reach a truly viable system, which doubtless will include hydrogen fuel cell and hybrid technologies. But only a fool would bet against electric buses. 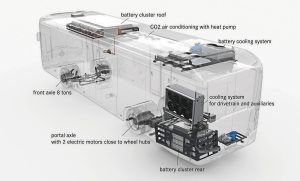 The layout of components on the eCitaro

Since 2008, the cost per kWh of battery – its ‘per mile’ price, if you will – has fallen by a factor of five, from around £800/kWh to £160/kWh. The energy density of the batteries themselves has gone from around 100Wh/litre to around 300Wh/litre (https://is.gd/KL3oqe). In other words, the battery space used in a 2008 electric vehicle would now take the vehicle three times as far. Batteries will continue to improve at this pace or faster, as other technologies are mastered.

Slowly, battery manufacturers are edging out the use of rare metals such as cobalt – obtained at great human cost. The recycling of Li-ion batteries, both for a second life as static batteries and for the value of what’s in them, has become an economical proposition
(https://is.gd/6UYYs7). Most lithium, by the way, is now obtained from salt lakes and the price is plummeting as more producers come to the market (https://is.gd/cpk7NC).

The attraction of electric buses goes beyond cheap fuel and zero emissions. There are more than 2,000 moving parts in a diesel engine, all of which require lubricating with pressure-fed mineral oil, which is discarded once or twice a year. In theory, a bus with hub motors can have eight moving parts in its driveline, does not need a gearbox, and does not require oil changes, nor indeed any adjustment for the lifetime of the vehicle.

Diesel has to be moved in tankers at 50mph along the road. Electricity moves at the speed of light, with little loss, along cables. It’s my fantasy that, in time, international grids will be developed so that renewable-rich countries – those with sunlight, wind and, eventually, tidal resources – can sell energy in a global market, as already happens nationally with our own grid.

There are physical and economic limits for electricity transmission, but China mastered transmission beyond 1,000km a decade ago. It needs some political will to create such a network, but it is not impractical – in political terms, enabling, for example, North Africa to create a market for sunlight may resolve some poverty issues.

Solar PV and wind turbine costs have halved in the last decade, in terms of energy generated, and now beat coal, gas and nuclear generation. And the intermittent nature of renewables can be mitigated not only by extending the grid, but by micro-storage – the notion that homes and businesses can use batteries – perhaps those upcycled from vehicles – to smooth power demand spikes. 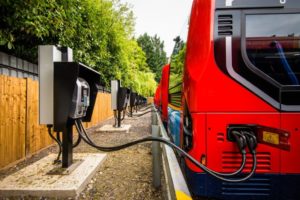 That’s all a long way from where we are now. As I write, we have two major issues to resolve before electric buses and, perhaps, coaches can be widely adopted.

The first is the price of the vehicles or, more specifically, the batteries. While the manufacturers will point out that whole-life costs are mitigated by hugely reduced energy and maintenance cost, the fact remains that someone has to find the capital cost; until either grants, free loans or perhaps a mature lease market exists for electric buses, uptake will be slow.

Then there are the batteries, which have a finite lifespan in a vehicle. Once the capacity of the battery has fallen to 80%, range is reduced below the practical limit for many buses. Those batteries have to be replaced, and can be up-cycled to on-site use or resale into home energy storage, but no vehicle operator would want to deal with that.

Leased, on-site battery storage is already offered for operators whose electricity infrastructure is inadequate for charging a fleet of buses. Indeed, the same company offers to own vehicle batteries, and that has some significant advantages, particularly as new battery technology comes on stream. The operator can not only reduce the capital cost but will not have to be concerned about the future of his batteries. Feasibly, this could see replacement batteries with newer technology actually extending the range of a used electric bus; a bus improving with age.

The second elephant in the room is the public infrastructure, which is already well short of the expectations of electric car drivers, and non-existent for heavy vehicles away from bus depots. Until the government steps up to the plate and funds the widespread and wholesale installation of fast-charge points at service areas, car parks and coach and truck parks, and even operator yards and attractions, we will get almost zero adoption of electric heavy vehicles. It will continue to suit only big companies in inner cities, who can get public money to support the cost.

Service areas, for example, have almost no economic reason to install fast-charge points; road fuel sales are the bedrock of their business, and getting a fiver off someone for charging an EV is of no interest to them. This needs more thought, more creativity and considerable pump-priming by central Government.

But it must happen. No matter where you are on the spectrum of man-made climate change belief, it’s morally bankrupt to take the view that we can carry on as we are; road transport is a fastest-growing sector for CO2 emissions and even if you believe this episode of global warming is cyclical, compounding it by flooding the atmosphere with greenhouse gas is indefensible.

Right now, electric buses are our best solution. While hydrogen fuel cells have huge merit currently for resolving issues of range and offering petrol-station-style refuels, the hydrogen has some downsides. Creating it from by electrolysis of surplus electricity is inefficient – losses are around 40%, and we could just use the electricity instead. Transporting hydrogen is also a problem. Compression into cylinders comes at a cost of 20% of the energy value of the gas, the cylinders are costly, and require road transport to move them (https://is.gd/738oIP).

Currently, creating enough hydrogen for road transport is not possible through electrolysis (https://is.gd/ZbWjQp) and the major supplies come from fossil fuel processes, with obvious downsides in terms of what low-emission vehicles are supposed to achieve. That said, it has applications for specialised road transport, and refuelling speed for fuel cells is a significant driver of uptake.

Biomethane, produced from waste, is probably the Cinderella of transition fuels, with great potential for extending the life of ICE buses and coaches in a reduced-carbon economy. Biodiesel, produced from used vegetable oil, has similar potential, but both produce some tailpipe emissions, so may not meet the aspirations of inner-city government.

The reality is that the big money is going into electric vehicle development, and that it is only a question of time before issues of range are answered by new battery technology. Whether government has the nous to match that with infrastructure which works is debatable. Indeed, the lethargy so far suggests ineptitude, sloth, or perhaps unspoken global concerns about the implications for industry which is geared to supplying fossil fuels.

We also have to consider the inertia of operators – especially of coaches – wedded to ICEs but we’re rapidly reaching a stage at which, in terms of uptake, the vehicles themselves will woo operators. We can only hope the infrastructure will keep up.