Abellio’s new ADL Enviro 400EVs are ‘greater than the sum of the parts’ says the company, as it launches a new fleet of highly-specified buses on TfL 63 route. Stuart Jones was there to see them

With ridership on TfL’s service 63 between Kings Cross and Honor Oak and the N36 night bus approaching pre-pandemic levels, the route is receiving a further boost with the deployment of 29 new ADL/BYD Enviro 400EV zero-emission electric double-deck buses. Not only are these ‘green,’ they are arguably the most passenger-friendly buses yet introduced in London and also incorporate additional driver-friendly credentials. 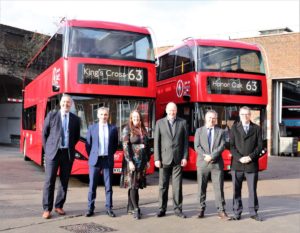 Specifications for buses on TfL contracted routes have risen steadily over the years but Abellio’s latest acquisitions are unusual in incorporating a considerable number of features new to the capital in one package, rather than each aspect being introduced and evaluated separately.

The key features are: high back Lazzerini Practico seats incorporating USB points and phone holders in the rear of each headrest, Altro slip-resistant wood-effect laminate flooring on both decks, new more-informative passenger information displays, new contrasting grey priority seat coverings, no hand poles on the upper deck to make it more open; and most noticeably, the incorporation of a large clear-glazed skylight in the top deck roof above the staircase. Capacity is 65 seated and 20 standees with one larger than standard wheelchair bay.

Bodied at the ADL Scarborough plant with City styling, the new vehicles are mounted on BYD chassis and have 382kW/h batteries giving a nominal range of 160 miles, depending on operating conditions. They take deliveries of BYD/ADL Enviro400 EVs past the 500 mark, although not all of those delivered are in service yet because some operators are having to resolve infrastructure issues first. Of those built, around 400 have gone to operators undertaking TfL contracts, which does emphasise how important London is in providing the economic scale necessary to build infrastructure. After completion at Scarborough, each bus is driven down from Yorkshire under its own power, stopping off at Millbrook Proving Ground on the way to recharge. 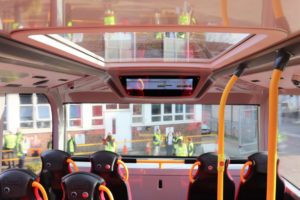 Enhancing safety by improving vision in all weather conditions and at whatever time of day or night, are Smart Vision camera monitoring systems that replace conventional mirrors with high-quality video images. The siting of the associated screens has been chosen by Abellio after consultation with its drivers. Another advantage of the monitoring system is that they are relatively discreet and with no mirror arm protruding from the body side, the chance of injuring inattentive passengers and cyclists is greatly reduced. Abellio now has 100 buses fitted with the systems.

In line with TfL’s Bus Safety Standard, introduced in 2019, enhanced in 2021 and set to be further strengthened by 2024 (in London), the AVAS (Acoustic Vehicle Alerting System) warns pedestrians of the approach of an electric or other very quiet bus. The sound generated is bus-specific and TfL is hoping that this will become the recognised standard noise electric buses will project throughout the country.

The upgrade of the 63 is a package that goes beyond the new buses to include the provision of a new bus lane on New Kent Road and ongoing improvements to infrastructure on the route. Traffic signals on the route have been optimised to prioritise the 63, some time-expired shelters have been replaced and there is additional Countdown provision. An innovation competition is underway to address how best to reassure customers at those stops without Countdown and when the results are determined this will be implemented.

TfL was keen to show off the new buses but perhaps more keen to make the point that it will not be able to introduce any further new or retrofitted buses on other routes without a long-term funding deal.

“Investment in the bus network is fundamental to London’s recovery, its sustainability and green jobs across the UK,’ said Tom Cunnington, TfL’s Head of Bus Business Development. “If you want to see London-style systems elsewhere, you need to keep the London model working.”

The buses highlight elements of TfL’s Bus Safety Standard including the AVAS and wing mirror cameras as well as positive advances such as anti-slip flooring, speed control systems, high-back seats and other features which help to reduce passenger injury. “These buses show all the development work undertaken which will make them cheaper to run, safer and hopefully will get more people on board, which will help balance the books,” he said.

On other alternative specification option proposals from other operators, Tom said, ‘it isn’t about uniformity it is about quality. If this proves successful I would like to see this sort of thing more commonly across the fleet. I’m not interested in gimmicks.

“We wouldn’t be doing it if we didn’t believe it was meaningful. Everything on it has a value in its own right but putting them together is greater than the sum of the parts,”

“We wouldn’t be doing it if we didn’t believe it was meaningful. Everything on it has a value in its own right but putting them together is greater than the sum of the parts,” said Tom. Although Covid has been difficult for both, he believes it has brought operators and TfL closer together than before.

He also confirmed that in future all TfL contracted electric buses will feature the prominent ‘I am an electric bus logo’ in addition to the green leaf motif because it wants to show that it is a step beyond hybrid. Asked about hydrogen he said TfL was, ‘technology agnostic, we want the best technical solution for each route. It has to ultimately be financially sustainable.’ 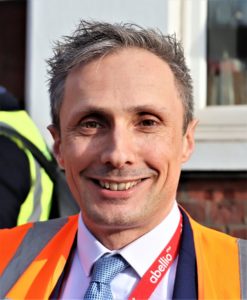 Recently promoted from Engineering Director to Managing Director of Abellio London Bus, Jon Eardley commented: “Investment in route 63 is part of our wider commitment to improve the travel experience for customers by introducing state of the art, best-in-class electric buses across London.” He explained that balancing the desire to add more with the need to abide by restraints such as axle loadings and GVWs had been difficult at times. Putting the high-back seats in added around 70kg although approximately 20kg of this was offset by the removal of the upper deck stanchions.

As an organisation, Abellio likes the franchising model and Jon spoke wholeheartedly of the need for continued support for the TfL network: “Here at Abellio we believe that continued and sustained investment in the capital’s zero emission fleet is essential to attract more people to use public transport, which in turn promotes other modes of active travel.

“Encouraging more people to use the bus by improving the offer to our customers is a catalyst for the decarbonisation of the network and helping to deliver the Mayor’s zero emission network and active travel targets.’ He argued that, ‘without continued and sustained funding for London, it could potentially push decarbonisation back for years, not just in London but in the UK.”

Jon highlighted the importance of seven-year tender contracts in enabling investment. With electric buses, manufacturers had to be able to guarantee their batteries would last seven years. Whether they then lasted a further one or two years was not an issue because planning would be on the basis of replacing batteries and refurbishing after seven years for a further seven years, to give a 14-year life.

He was now asking manufacturers why, without a diesel engine shaking them, buses could not last 21 years? He believed that bus design was reaching an end game after which the biggest thing to change would be battery densities, and this brought the potential for greater interior space.

All 29 of the new buses will be based at Abellio’s Walworth depot which has a capacity of 185 buses and is currently operating 165. The second biggest of Abellio’s depots, only Battersea is bigger, it already operates both the classic Enviro 400 and the Enviro 400MMC though the Enviro 400EV is a new type for the company. Walworth has prior experience of electrics with 34 single deck Caetano buses featuring Toyota electrics. Ten have been used on the P5 since May 2020 and 24 on the C10 since August of the same year. They have just reached a combined mileage of two million miles and are ‘performing really well.’

The 63 was previously a Go Ahead route and has a PVR of 26 which will leave three spare for servicing and accident repairs. They are being driven by a dedicated team of 80 drivers. One to one route and vehicle familiarisation was undertaken from December 2021 for every driver at the depot while the vehicles were in build, with ADL providing a demonstration bus to help. Drivers for the 63 and two other routes report to a dedicated driver manager who ensures that hazards are monitored and feedback is passed between members of the team.

Despite being seen as the smallest of the big groups or the biggest of the small groups, Jon Eardley stressed, ‘We are keen to punch above our weight on decarbonisation,’ adding, ‘We want to be the first to pitch for a fully electric night route. The technology is there.’ He also described Abellio as ‘keen to grow.’

He revealed some interesting insights into specifying electric infrastructure, including why Abellio has standardised on DC rather than AC systems. Although forced into going DC for the original Caetano electrics because of the charging pattern needed to match their operation, Jon told me that scaling up AC systems becomes very difficult once you have over 40% of a depot’s allocation electrified. As DC allows more rapid charging of batteries, the necessary flexibility to properly utilise a fleet can be maintained. He pointed out that charging technology is moving forward as fast as vehicle technology.

Siemens charging equipment capable of charging at 150kW has been chosen for Walworth where this stage of the electrification will mean that there are 67 charging points. The BYD/ADLs are only capable of accepting 112kW so the units are being limited, though the Caetanos will take 150kW and will soon be able to take 180kW. Already, the necessary power has been secured for 100% electric operation from Walworth, with the intention being to add the necessary infrastructure to deliver it in stages as it is needed. Although DC chargers have a larger footprint than AC, they can be positioned remotely from the point of delivery and the buses charged from remote heads. In the second stage of Walworth’s electrification, the chargers will be located in the roof and have motorised retractable drop-down charging cables which will result in no footprint on the garage floor. Charge from DC chargers can be split to more than one charge head to make the charging process more flexible. Those being installed at Hayes will each have a 300kW capacity which will be simultaneously capable of delivering 150kW to two buses.

I was treated to a run on one of the buses back to Vauxhall and there is no doubting the quality of the passenger experience the vehicles provide and, when matched with appropriate priority and promotion measures, their potential for attracting new and returning customers on board. There still remains a question in my mind in a post-Covid era of limited resources, whether ever better and cleaner vehicles in London are more important than supporting the swathes of the country likely to see their bus networks decimated? It would be great to have both but experience tells me that we are unlikely to get that.