Buta Atwal, Chief Executive of Wrightbus, is to retire at the end of the year. 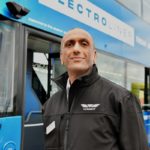 Mr Atwal said after “a great deal of consideration” he had taken the decision to pursue his own personal interests. Mr Atwal, who became Chief Executive in 2019 following the successful acquisition of the company by Jo Bamford, will leave the company in December 2022. New Chief Executive, Joerg Hofmann, the current CEO at London Electric Vehicle Company (LEVC) will join Wrightbus in September 2022 and will work alongside Mr Atwal to ensure a smooth transition.

“I want to be with my family more and explore my faith, which is very important to me, more deeply” – Buta Atwal, Chief Executive of Wrightbus

Mr Atwal said: “It has been an enormous privilege to oversee the incredible advancements we have made since taking over the business in 2019, but the time is now right for me to move on and pursue some of my own personal interests. I want to be with my family more and explore my faith, which is very important to me, more deeply. We have a tremendous team in place, so I feel comfortable that I and the company are in a position to allow me to do this.

“It is with some considerable satisfaction that I will be leaving at the end of a year which has seen us hit some incredible highs, with our hydrogen buses having clocked up more than 1 million miles and our StreetDeck Electroliner officially named the most efficient double deck battery-electric bus in the world. I strongly believe that this is just the start for what Wrightbus can achieve.”

“I managed to persuade Buta to come out of retirement once…but twice has proved impossible” – Jo Bamford, Wrightbus Executive Chairman

Jo Bamford, Wrightbus Executive Chairman, said: “Buta has been instrumental in the success of Wrightbus and I’d like to pay tribute to his dedication and vision during his time as CEO.

“He left no stone unturned in driving this business forward and delivering what experts have said is the most efficient zero-emission bus in the world.

“I managed to persuade Buta to come out of retirement once, when we bought Wrightbus out of administration in October 2019, but twice has proved impossible and he leaves with our best wishes and thanks for a job well done.

“From September, we look forward to welcoming Joerg to the team. He has big shoes to fill but we’re convinced he’s the right man for the next stage of our development.”