On a dismal January morning in Nottinghamshire, dawn broke in the winter sky and the Van Hool EX16M was put in position ready for photos. The previous night, the new coach had been parked in the depot of Sharpes of Nottingham, one of the operators chosen by Arriva Bus and Coach for the vehicle’s Grand Tour across England.

Among the Arriva team at the event was Sales Manager RHD Markets and Scandinavia, Daan Peeters. He explained there are some significant differences between this model and its EX16H predecessors. These include some aesthetic changes, with the stainless steel body getting a facelift, including restyled sides and rear. Inside, the dashboard’s design is completely new.

The new model has been re-engineered to save weight. Its roof is lighter than the previous EX and the engine is mounted on a sub-frame on the rear chassis, to eliminate vibration at the back of the coach. The shock absorbers are also mounted on this frame, which cuts down noise as well as vibration.

Daan said: “The new suspension is electronically controlled. It moves faster over bumps. The ride and manoeuvrability are good, giving the passenger that good, safe feeling.

“We did some fuel-saving things as well,” he added, highlighting the hydraulic cooling system, which requires no belts. Not only does this reduce vibration, but it also helps cut fuel consumption. The EX16M uses 7% less diesel than the previous model. The new generation engine from DAF, to be released later this year, should lead to even greater fuel savings.

Weight savings and fuel savings are a theme that will be continued on all Van Hool coach ranges in the future, according to Daan. In particular, it is to be carried onto its double-deck and two-axle variants, which he said are the most weight-critical vehicles. Other vehicles Van Hool could be bringing to these shores, Daan said the EX L (low-floor variant) and EX H (high-floor), Daan revealed. The former would be ideal for school services, where it is already proving popular in France.

“The EX is doing well in Europe,” said Daan. “The biggest market is in France and in other countries it’s also doing very well. With the good team we have here, we are hoping to do the same in the UK. We did a similar demo of the vehicle in Ireland just before Christmas and the reactions were that it was a good vehicle.”

To cope with its success, the Macedonian plant where it is manufactured has doubled in size. As well as the EX, the factory also builds the CX model for the American market. 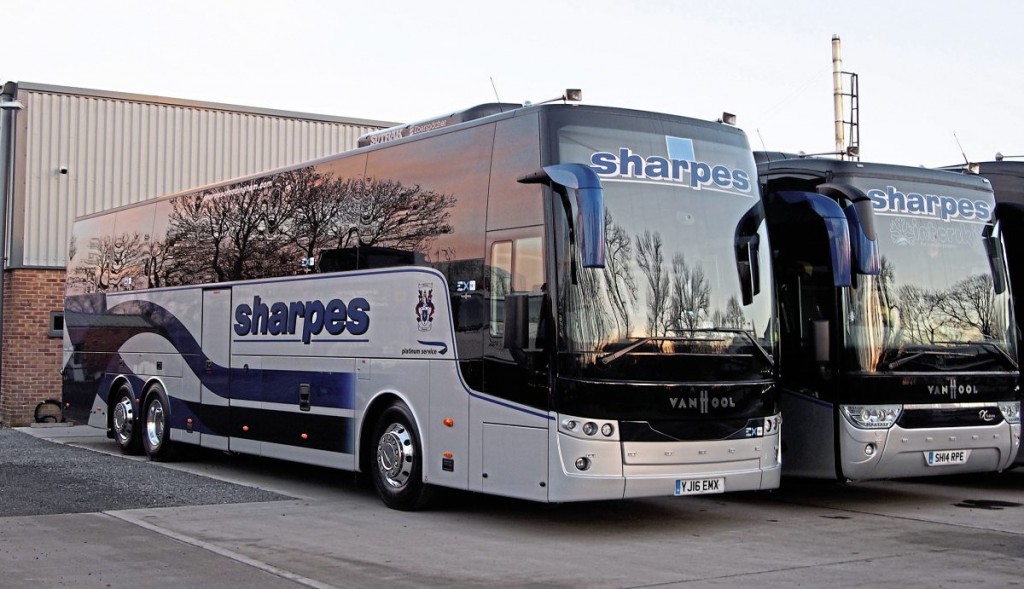 Sharpes already has experience operating the EX range, having taken the first in the UK

As the Arriva entourage headed off on their next leg of the tour, the Sharpes team told me what they thought of the new EX. Nobody knows more about Van Hool than this family, who operated the very first EX model to enter the market. It also operates a lot of other Van Hools. The management team of Neil, Russell and James Sharpe test-drove the new EX the night before. 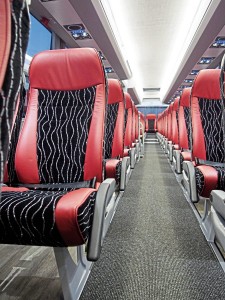 “It drives very similar to the EX we’ve got,” Russel added. “They’ve done a lot of work to reduce vibration; it’s definitely been enhanced. It’s not drastically different, but it’s been tweaked. They’ve done some engineering under the skin. With the new DAF engine, they say it will improve fuel consumption by another 7%. It’s extremely well put together.

“This for them is a big step. It goes a lot deeper than just the dash changes and a bit on the front. The engineering in it is going to carry on to the next generation.”

When the EX was first launched in the UK, the Sharpes team noted it was described as a budget or entry-level Van Hool. Neil said: “We don’t think it was right for people to badge the EX like that. This new version will hopefully kick-start that and people will recognise it as a quality vehicle.

“On our EX, we took the curve over the glass from the TX and had that on it. It softened its look. They’ve taken our styling for this new one.

“Even though it’s 13.2m, it feels like a 12m vehicle. The axle span is increased and the rear overhang feels as if it’s less.”

How does the EX compare to the TX? Neil said: “If you have the TX and the EX at the same price, I would have the TX all day, every day. But the EX doesn’t deserve that budget tag that it has. If you asked the punter which one’s more expensive, they wouldn’t know.”

Commenting on the EX, Russell said: “It’s definitely a Van Hool, there’s a lot of similarities with the others. From our perspective, we are immediately familiar with it.”

However, the brothers aren’t so keen on the ‘standard’ nature of the EX specification compared to the bespoke packages offered with the rest of the Van Hool range. Neil said: “With the specification of the TX, your choices are endless when it comes to the specification, the moquettes and everything. But the EX is very much a mass-produced product with limited options. If we really strive for the standards we want, then the EX isn’t giving us all the options we like.

“What it boils down to is it’s a commercial vehicle and, for most, that’s not a problem. It’s only because we go that extra mile with the specification, with the extra marker lights and things like that, that it matters.” 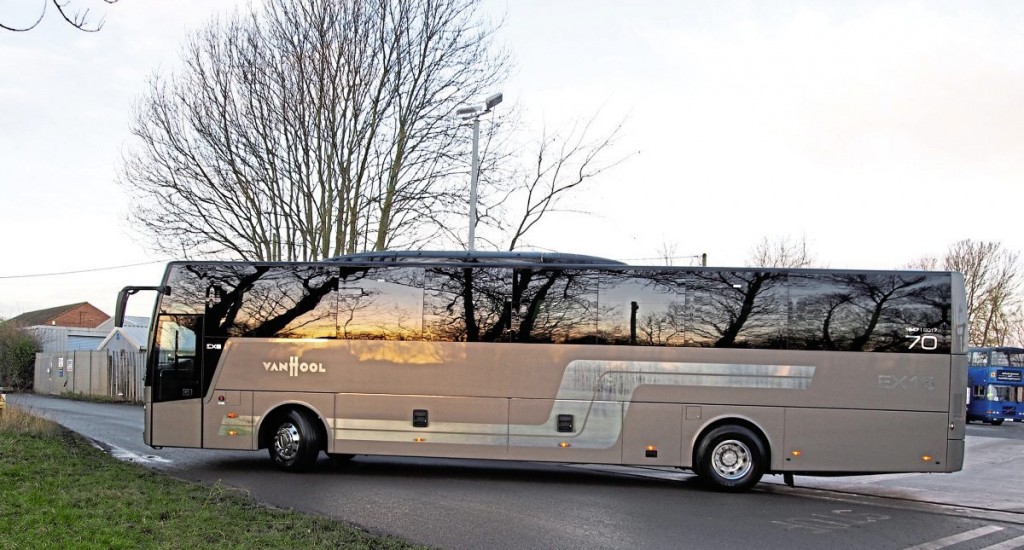 Performance-wise, Sharpes is impressed with the EX. Neil said: “They have out-performed all the TXs. Our EX is the least problematic of them. Van Hool admits the engineering standards in the Macedonia plant have gone beyond their expectations.”

Russell said: “There have been some lessons learned in Macedonia that have been passed on to the Belgian plant.”

So, would they buy one? Neil said: “I don’t know. There is a good mix between the EX, TX and the Mercedes-Benz Tourismo.”

According to Russell: “In the last 15 to 20 years, you couldn’t buy better; Van Hool was the benchmark. But now, you have the Mercedes, Irizar and the Plaxton Panther. They’re all products that deserve to be as good as Van Hool. But I think the EX has improved.” On this, all three agreed.

Aftersales was highlighted by James, who said: “The back-up and support from Arriva and Van Hool cannot be faulted. Seeing the EX, it rules out the Mercedes and Irizar for me.”

As to what kind of work the Sharpes see the EX used on if they did get one, James said: “The EX will do everything!”

“It’s an all-rounder, it covers all aspects,” agreed Neil. “It can do private hire; it can do skiing holidays.”

James added: “With its big lockers, it will be no problem for skiing. It could also do our excursions. The hostesses will love it. The feedback is great and the drivers will love it.” 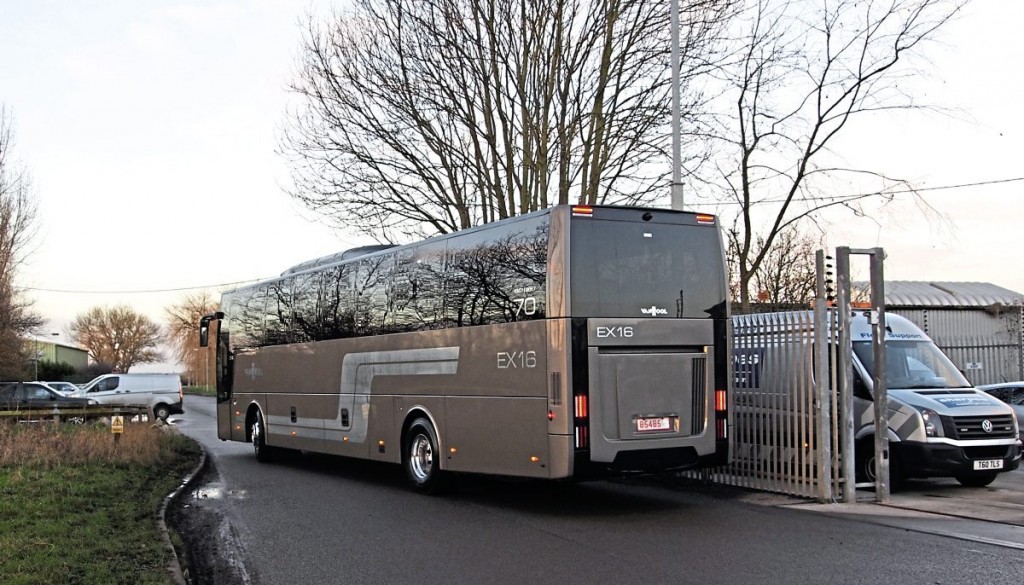 Back in the camp

“We’re big Van Hool fans, that’s obvious from our fleet,” Neil said. Sharpes has been a customer of Arriva since 2004, when the operation was set up. Their preference for the marque is born out of experiences with it from other work they did before setting up their own business.

Neil did admit that Arriva has had its problems in recent times though, but the dealership has gone through a lot of change.

Overall, the view of the Van Hool dealer is positive among the Sharpes. James said: “They listen. They’ve always stepped up and listened.”

Neil said: “They understand that when you’ve got a problem, it needs to be back on the road.” The same care and attention is not present among other dealers, he observed.

Neil described the vehicles themselves as quality products and ones that have good residual value. “I’m back in the Van Hool camp again, because I was veering away.”

Russell said: “There has been a lot of influence on Sharpes to look at other products. But Van Hool have listened. It’s good that we can talk to the manufacturer and they listen.”

Whistle-stop tour – Arriva’s tour of the country with the Van Hool EX16M took in the following operators: