Centrebus is to operate what is thought to be the UK’s longest electric circular bus route.

The service takes passengers on an orbital route connecting key sites around Leicester.

The Orbital service is to connect estates and suburbs on the city’s outer ring road and beyond, with locations such as shopping centres, hospitals and other key transport infrastructure. It replaces the city’s 40 Circleline service and will come into operation on 24 October. It is designed to help connect and integrate with other services within the Leicester Buses Partnership, making public transport more accessible and convenient for residents and visitors.

Yutong buses are being supplied for the Project from Pelican Bus and Coach. 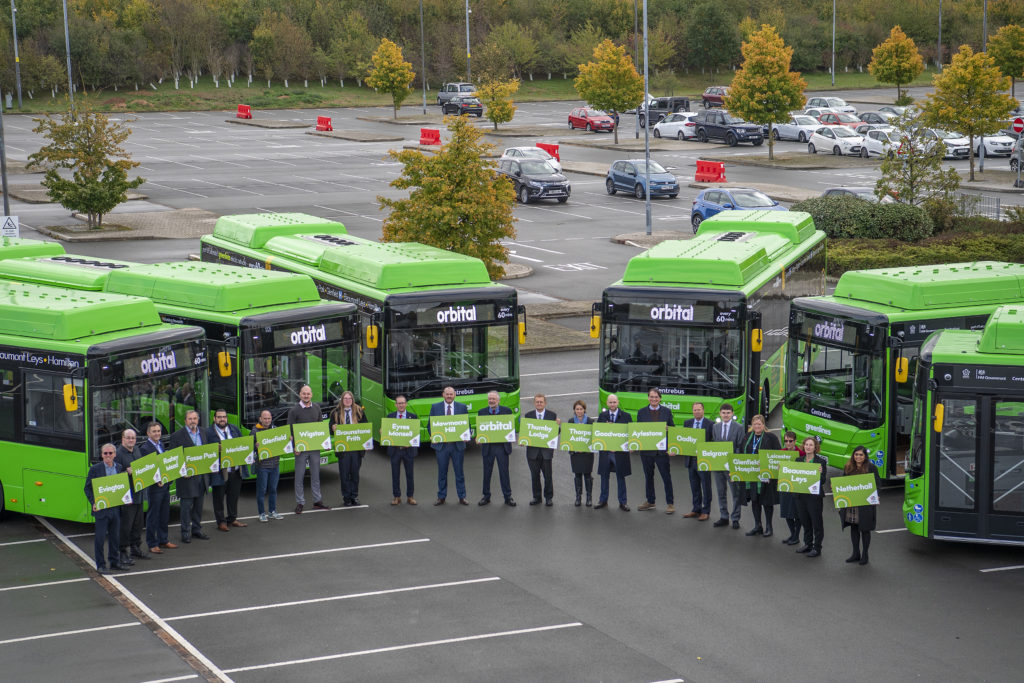 It is the latest addition to the city’s Greenlines electric network, and is the fifth new service to be launched using the new council-owned electric buses. The partnership project also includes a new electric bus charging depot at the firm’s Thurmaston depot. Zenobē, the electric vehicle fleet and battery storage firm, has been involved in the Orbital bus project.

The electric buses and charging depot have been partially funded (£1.21m) by the DfT’s Zero Emission Bus Regional Areas (ZEBRA) scheme and combine to make the first ZEBRA funded project to be delivered in the country.

David Brookes, director of Centrebus, added: “We have worked closely with our colleagues at the city council to introduce these state-of-the-art electric buses to the newly-named Orbital route.

“They’re the first electric buses in the country to hit the road funded through the Government ZEBRA scheme which is testament to the speed at which the city council and our fellow partners have delivered this project.

“Together with the upgraded bus stop infrastructure and additional real-time information displays across the city, these buses will not only improve air quality but will encourage people to leave their cars at home and use public transport. We’re proud to be part of the Greenlines network and the wider Leicester Buses project.”

Steven Meersman, co-founder Director of Zenobē, said: “We’re delighted to be collaborating with Centrebus and Leicester City Council on the first ZEBRA-funded project to be delivered in the UK.

“It’s an important step towards the decarbonisation of the transport industry and towards country-wide net zero goals – and it will make a tangible difference to air quality for the residents of Leicester. By delivering the supporting charging infrastructure and charging optimisation software, we’re proud to be helping minimise the costs of operating an electric fleet and to be supporting environmentally-sustainable transport options on this important route around the city.”

Ian Downie, Head of Yutong UK at Pelican, which is supplying the new buses operating on the Orbital route added: “We are honoured to supply the very first ZEBRA funded zero emission vehicles in the UK to LCC.

“Our fully air conditioned Yutong vehicles are the most efficient single deck buses in the UK. The products are tried, tested and proven with enhanced passenger-centric features and bring class leading comfort to Leicester.”

This is the first phase of the council’s plans to radically improve on the previous diesel Circleline service over the next two years, subject to funding available.

Leicester City Council has invested £2.11m in this project, with the aim of removing a predicted 177 tonnes of CO2 emissions per year and reducing operational costs by over £60,000 a year.

Alongside state-of-the-art new buses, there is also over £10million of planned bus priority works in future phases, supporting the city’s vision for a tram-style bus network serving the whole city.

By the end of the four phases, the route will involve 20 electric buses in total, running every 15 minutes around the city, allowing better connections, improved reliability and further integration with other cross-city services.