Click on the picture above for a gallery of the Rally

After missing two years due to the pandemic, the 66th UK Coach Rally, staged by Coach Displays Ltd, returned to Blackpool seafront for a bracing weekend of competition and celebration. Participants welcomed the opportunity simply to be there and enjoy the regular features of the rally where, running late as ever, seasoned competitors walked away with the top awards.

Tough times in the industry no doubt impacted the number of participants with 46 taking part this year, slightly fewer than 2019 and inside the location’s maximum of 55. The reduction was most noticeable in the smaller and heritage vehicle entries while competition for the coveted UK Coach Rally Coach of the Year was as buoyant as ever. The event marked the return of Parry’s International to the rally scene with Dave Parry and his team securing an 11th top spot among a six-award array. Their UK Coach Rally Coach of the Year success was based on the high-quality presentation and specification of their new DAF-powered Van Hool TX17 Astron with just 48 seats in its 14m length. The vehicle is one of two delivered to the company early in the 2020 pandemic and kept in warm storage until registration for this coming season. 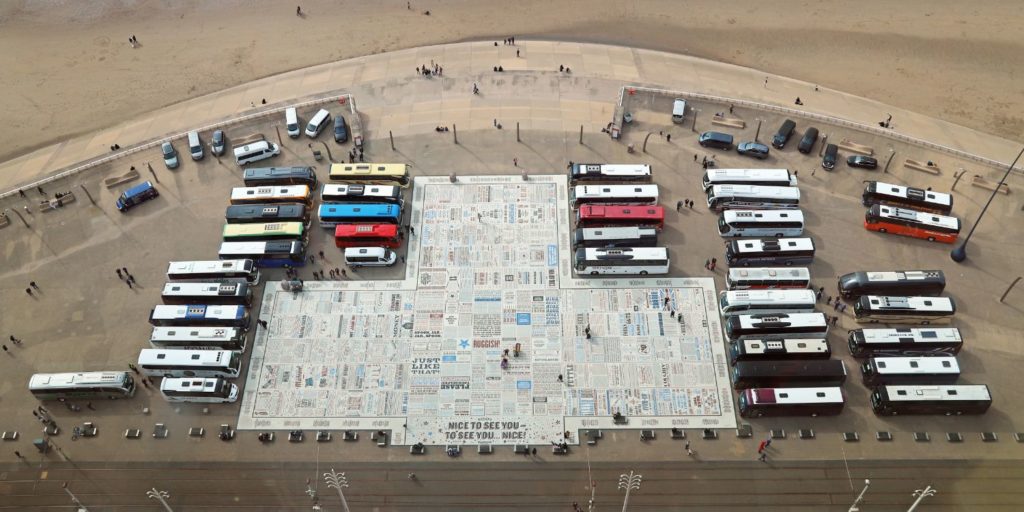 Behind the wheel, Russell Cooper retained the UK Coach Rally Coach Driver of the Year trophy he had won for the second time back in 2019. The 2016 Mercedes-Benz he was driving received the award for the best vehicle over five years old. Russell surely also took the title for the largest entourage assembled to receive his awards from Traffic Commissioner, Kevin Rooney and MD Blackpool Transport, Jane Cole.

Among the full size-entrants, the highest percentage was Volvo-based with 11 vehicles in a variety of body and chassis combinations although only those supplied by Volvo Bus were eligible for the manufacturer’s trophy, the successful entrant being Brethertons Goldline with their recently delivered 13.1m B11R-based Volvo 9900. Another Volvo-based vehicle, a Plaxton Panther, secured the Plaxton trophy for Howard Snaith Coaches. Van Hool was close behind with eight integrals plus two VDL-based bodies, their award going of course to Parrys International. 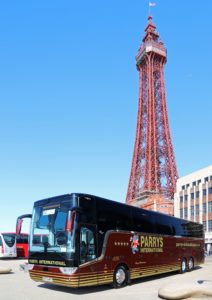 Of all the manufacturers’ trophies, the Mercedes-Benz one was probably the one most keenly fought over with six Tourismos (plus a Touro and Tourino) taking part, reflecting the model’s place as the bestselling coach in the UK in 2019, the last full year not impacted by the pandemic. Rally stalwart and relatively new Tourismo customer Bibby’s of Ingleton clinched the award with a newly delivered vehicle although Simpsons Coaches of Rosehearty were not to be outdone with its new delivery receiving The Bernie Porton Memorial Trophy for the Coach of the Year as voted by participating coach drivers. It also received the Tony Rouse Trophy for the top coach from Scotland while the top coach from Wales, receiving the Cymru Trophy, was another Tourismo, a 2019 example in the Williams of Brecon fleet.

After Mercedes-Benz, there were four Irizar integrals including probably the first hybrid to enter the rally, Cozy Travel’s i4, then two Temsas, two Neoplans, a Scania and a Setra. Two operators entered classic British heritage coaches alongside their latest deliveries. Howard Snaith’s Plaxton Supreme-bodied Ford R1114 took us all back to the noisy front-engined coaches of the early 1980s while class winner for coaches over 25 years old, the Plaxton Excalibur of Aldermaston Coachlines, had the luxury of a Volvo B10M chassis. Both had been extensively refurbished throughout. One special category worthy of mention is the Fred Bibby Award for the Best Loved Coach which was awarded to Metcalfe Coaches of Carlisle for their excellently presented 2010 VDL-based Van Hool Alizee.

Classic Coaches of County Down made their crossing from Northern Ireland worthwhile by taking away not just both midicoach-focused awards but also those for the top operator in all categories and top performer in the Saturday driving tests. Their vehicle attracted attention too, being a rare example of the Turas 900s based on a Leyland DAF LF180 chassis supplied to them by Brian Noone Ltd in 2021. 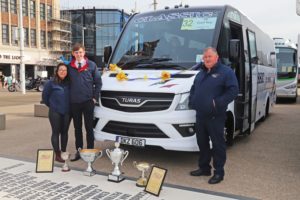 Long-term rally supporter Ian Haines entered the only minibus participating, a 2020 EVM-bodied Mercedes-Benz Sprinter 516CDi, supplied by EVM. In addition to the minibus class trophy, Ian was initially rewarded with the Maurice Wrightson Memorial Shield sponsored by drivers from Stanley Travel for the oldest employed rally participant. Subsequent investigation highlighted the latter was actually due to Darren Russell of Adventure Coachlines.

Saturday’s road run started promptly in bright sunshine but proved more challenging than previous Blackpoolbased events with drivers reporting passing coaches going unexpectedly in the opposite direction at various places, allegedly a road sign had gone missing somewhere. In a Blackpool first, all participants had departed significantly before the first ones returned. These first returnees were lucky to avoid the very wet roads courtesy of a series of short sharp showers which delivered the only break from the weekend’s sunny and dry if somewhat cool and breezy conditions. Glen Valley Tours were the top team on the road and it is a matter of conjecture whether their multi-tune horn gave them any advantage! They were not the only ones with such an addition and a cacophony of sounds from competing horns of coaches parked around the Comedy Carpet could be heard at times! 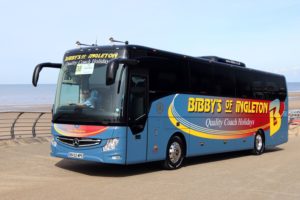 The Mercedes-Benz trophy was hotly contested by a number of new Tourismos, the award going to Bibby’s of Ingleton with their Evobus UK supplied vehicle

The rain also affected the Saturday driving tests even after it had stopped. It proved impossible to attach the bullseye to the surface and this element of the driving test was dropped. It did allow the first-round tests to be completed earlier than normal meaning all coaches could be displayed for longer around the Comedy Carpet. 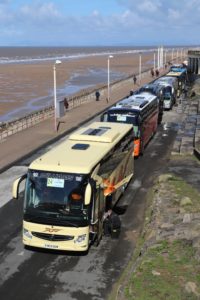 contribution was recalled in several ways: a page in the programme; models of his OB coach on the tables at the event dinner and the award of a trophy in his honour to the highest-placed coach from a first time rally entrant. This was awarded to Go North East whose Plaxton Elite-bodied Volvo B9R was crewed by Daniel Graham and Go North East MD, Martijn Gilbert, with dog Brian who would probably have won the best dressed crew dog if there was such an award.

Overall, there was a strong feeling that staging the rally was a significant step on the industry’s route back to life and, with the usual trials and tribulations, it was definitely a case of “normal service resumed.” We look forward to the 2023 event. 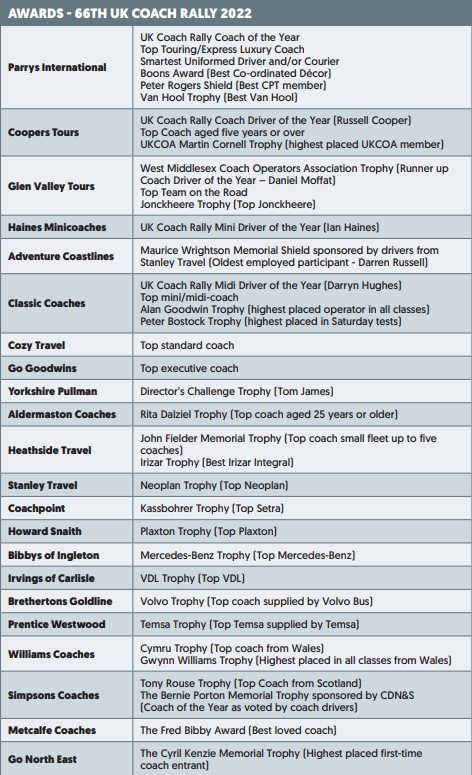