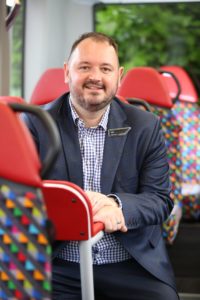 Transdev has apologised to passengers for any inconvenience caused by cancellations of a small number of services due to the driver shortage.

The operator says that so far only a relatively small number of its services across Yorkshire and Lancashire have had to be cancelled as it works towards a resolution to a situation the Confederation of Passenger Transport (CPT) says has led to a shortage of more than 4,000 drivers nationwide.

The north of England operator says prospective drivers at its training facility, The Academy, are currently waiting over three times longer than usual to get their licences and test dates confirmed by the DVSA, which it reports is leading to delays in moving them forward from the classroom to the road. The operator’s current 95 trainee drivers are waiting more than three times longer than usual for licences and test dates.

The delay comes as customer numbers on Transdev’s buses continue to recover strongly from the pandemic. Its buses are now carrying 85% of the numbers onboard at the same time in 2019, ahead of the nationwide figure of 75% from the DfT.

“We’re running a high-profile recruitment campaign highlighting the many benefits we offer to new drivers, including a £1,000 welcome bonus to those already holding a licence” – CEO of Transdev, Alex Hornby

CEO of Transdev, Alex Hornby, said: “We’re grateful to our colleagues and our customers for their patience with us – we understand entirely how frustrating it is when journeys are cancelled, and it’s the last thing we want to do – especially at a time when we’re attracting more people back to bus.

“We’re using social media and our Transdev Go mobile app, which tracks all our buses in real time, to keep customers informed – and we’re running a high-profile recruitment campaign highlighting the many benefits we offer to new drivers, including a £1,000 welcome bonus to those already holding a licence.

“Right now, we have 95 new colleagues at The Academy, our in-house driver training facility in Yorkshire and Lancashire. They just want to complete their training and be out on the road serving our customers – but instead, they’re waiting over three times longer than usual to get licences and test dates confirmed from the DVSA.

“Now is the time our industry needs help to resolve these delays, so we can deliver services confidently and get more people back onboard. Most of our buses are running as normal and we are attracting new drivers, so the current delays to licensing and testing are very frustrating.

“At an industry-wide level, we’re asking the Government to speed up the provisional licence applications and free up availability of theory and practical tests. We are also keen to introduce our own delegated examiner to help process testing, but DVSA training needed to help us introduce these roles remains suspended. Meanwhile, we’ll continue to do all we can and continue our campaign to recruit more new drivers.”