Shaw’s of Whitley has perhaps one of the youngest – and certainly most enthusiastic – drivers in the country. Bus and Coach Buyer meets Dale Worsfold to find out why coaches have become his career… and what drives Shaw’s.

Before even being introduced, Dale Worsfold was instantly recognisable. Dale, a driver at Shaw’s of Whitley, is a regular entrant to Bus and Coach Buyer’s Photo Friday competition, so we often see his face on the computer screen alongside his latest photographic offering.

Dale is a rarity; at the young age of 24-years-old he bucks the trend of middle-aged and older drivers across the country. He will have been with the North Yorkshire operator for six years in April. Enthusiastic about coach driving, he has been boarding Shaws’ coaches for even longer, having caught them to school.

When he left full-time education, he regularly came down to the operator’s yard, tucked away in a corner of the village of Whitley. He would accompany drivers on day trips. 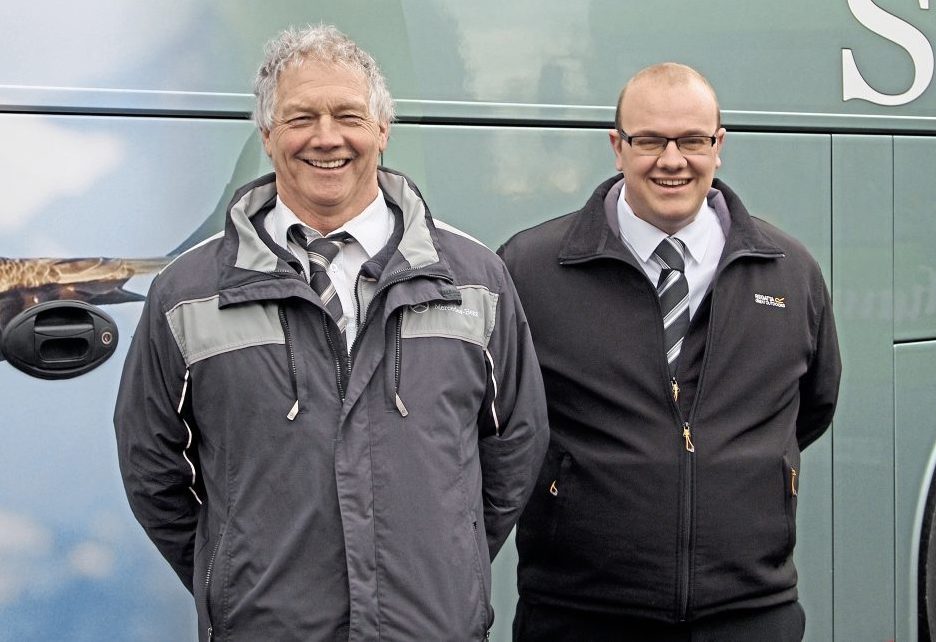 Phil Shaw with what could be the next generation in coaching, Dale Worsfold

When he turned 18, he applied for a PCV licence, passing on the second attempt. “I love it,” he enthused. “I get to go to various places and over into Europe. It had always been my ambition to drive large vehicles; coaches, trucks, trains. When I was a real youngster, I always thought I would like to be sat in the driver’s seat.”

What could be done to attract more young drivers? “I don’t know really. For me, it’s more of I have an interest. For young ones, it’s being away from home. For others, it can just be another driving job. But I don’t see it as a job, I take an interest. I love everything about it. I’ve been to Paris, the Somme and Ypres. La Rochelle was a really good trip. I get sent anywhere; Isle of Wight or up in Scotland.

“You’ve got to have an interest in it. I know some people that are interested in coaches, but they only take photos of them. It’s just trying to get people to drive.”

Dale does not love every aspect of the job though. A little abashed, he mentioned the least favourite part of his work: “The biggest thing for me is paperwork. But you’ve got to fill the forms in though; you need the paperwork top notch.”

Part of the family

Sitting on an armchair in the office at Shaw’s depot, Dale said: “You feel like part of the family here. I couldn’t work for anyone better. If you have any questions with routes, here you can just go to somebody and then they will give you the right answer.” 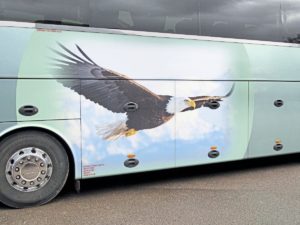 It is not just behind the wheel Dale helps out at Shaw’s though, he is also a keen photographer and some of his images appear in the operator’s tour brochures.

As well as taking pictures, Dale volunteers on the North York Moors Historical Railway. Talking about the trains, he said: “I’ll be chucking coal in them, cleaning them, that kind of thing. I do that as a hobby. Or I’ll go out for a day out in the car and take my camera with me, do a bit of train spotting.”

Dale has a coach from the Shaw’s fleet assigned to him, a DAF-powered Van Hool Astron 53-seater. “Driving that particular coach, I feel like I’m at home. I take it miles and it feels comfortable, start to finish. I’m lucky to be a young driver with a fleet of brand-new coaches.”

It was at this point that Phil Shaw, Operations Manager of Shaw’s of Whitley, entered the office. He is pleased with Dale joining, adding some much-needed new blood into the industry. In his rugged yet homely North Yorkshire accent, he said: “There’s not a lot of the younger generations in this industry. There’s a lot of anti-social hours in coaches, they don’t like that.”

What can the industry be doing to attract more of the younger generation? Taking a moment to think about this, Phil said: “I don’t know what can be done to attract more of them in. It’s an industry where, shall we say, the wages aren’t top-line. If technology goes as it is, then we might be having driverless vehicles anyway.

“Driverless will come. I don’t agree with it to a degree. I don’t think it’s do-able. There are a lot of country roads that are not wide enough for the vehicle. With modern ones, with the sensors on them, if you have one of these narrow roads, the sensors go off on them the whole time, even though you’re on the road and you can get through. If that’s what a driverless coach is using, how would it know there’s not a parked car there?”

On the subject of advances with technology, Dale noticed: “They’re doing away with mirrors. They’re using cameras instead of mirrors.” 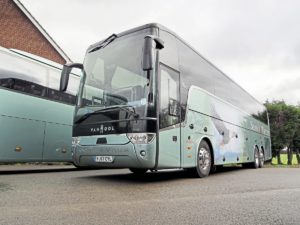 Shaws of Whitley is a big fan of Van Hools, which make up the majority of its fleet

Phil said: “Technology is on the border of going too far. Some of it’s good, tracking devices are good because you don’t have to bother the driver to know where they are. You can get that information on your phone.”

Shaw’s use Pace Technology to track its vehicles. Not bothering the driver while they are out on the road is important for Shaw’s. Phil said: “Even if they are on hands-free, we avoid contacting them as much as possible. With the tracking, we can see where the driver is and what progress he is making. That’s good.”

Phil believes lane departure systems are beneficial too; he is positive about devices that help the driver: “Eye tracker camera systems are a good thing for spotting fatigue in drivers. If the driver feels fatigued, the seat gives a jolt.”

One development in technology Shaw’s cannot ignore is Euro VI engines, especially with the upcoming ULEZ. “We’re all Euro VI bar one,” Phil said. “Three out of four in our coach fleet are quite modern ones. We have three Euro VIs and one of the DAF Van Hools is Euro V.”

Shaw’s prefer Van Hools, having three of them, and one Mercedes-Benz Tourismo. Phil said: “They’re just a quality build and Arriva Bus and Coach are just down the road. We used to be a Setra operator, but we made the switch to Van Hool when the Setra brand went from this country.”

The company has for a long while operated a fleet of four or five vehicles. But are there any plans to grow the size of the operation? “We’re happy with where we are, we don’t want to go any bigger. We want to stay where we are.”

Considering what challenges there are out there for operators, he said: “Leeds is going for a CAZ, it was quite a quick decision. From what I can understand it comes into play from January 2020. Operators in the zone are going to get some sort of funding, but those just outside the band get to fund their own.

“I know one operator in Leeds who is Euro VI already, so they aren’t going to get any funding. We are working out of Leeds four to five times this week. It’s the Council making money.”

Shaws Mercedes-Benz Tourismo alongside one of its Van Hools. The Tourismo is the only coach in the fleet not to be from the Belgian manufacturer

He continued: “I see another problem being keeping up with the rates we as an industry are working with. I can see the problem being able to afford to renew the fleet. I see that as a problem. One or two operators have gone into liquidation recently. I think there are going to be fewer and fewer operators to push the rates up. But that doesn’t seem to be happening.”

Shaw’s bread and butter work is its own tours and excursions. But it also provides private hire for local groups and organisations, such as the WI and schools. The operator also does coaching on behalf of third parties and for emergency services, such as rail replacement.

Shaws’ paintwork is applied at Britcom International, the Market Weighton commercial vehicle repair and refurbishment specialist. The Mercedes-Benz in its fleet is looked after by Northside Truck and Bus in Doncaster.

Whitley is well located for a coach operator, according to Phil. “You’ve got Moseley, Arriva and Pelican Bus and Coach; there’s quite a few around us. We have a lot within a 20-mile radius. We’re quite central for Yorkshire and the country. We have a good motorway network nearby. It’s good for airport transfer too, at Doncaster and Leeds/Bradford.”

Shaw’s serves only the local area with its holidays packages. Phil said: “I like to get people picked up and away on holiday. We never venture further than one hour away from their home before getting on with the journey. We do 20 to 25 tours a year. They were well supported last year. Maybe it was because of the weather.”

One difference this year to the climate might be more political than weather related, with Brexit due to happen before summer (at least, that is the case at the time of going to press). But Phil is undaunted: “I can’t see it making any difference. Europe needs us as much as we need them.”

One thing that is changing is Shaw’s fleet buying pattern. Phil said: “I will have to buy something, but probably at the back end of this year. I’ve recently been buying at the back-end lately, rather than the beginning. It will be either a Van Hool or another Mercedes that I’ll go for.” 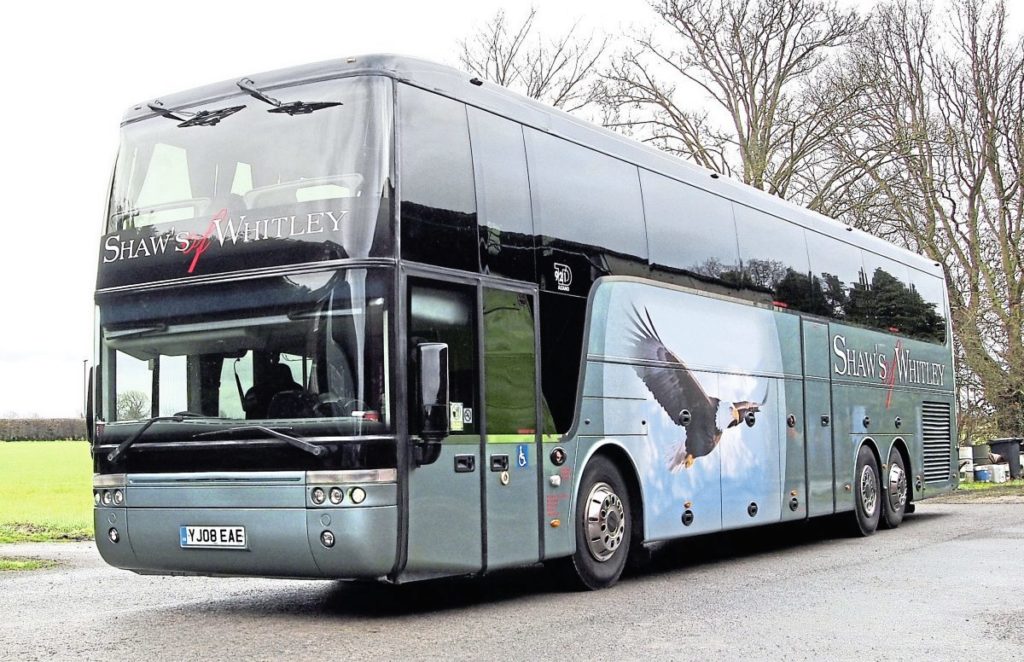 Large coaches like the Van Hools and Mercedes-Benz have not always dominated the Shaw’s fleet. Back when Phil’s mother and father founded the operation in the 1970s, they were running mini-coaches. Phil said: “I left school in 1976 and that’s when things changed. Up till then, father worked part of his time farming and part of his time coaching. Then I went farming and father concentrated on the coach side.

“At the time, we bought this place and rented another farm in the neighbouring village. When father retired in ‘92, we lost the other farm. Then I came into the coaching side. What land we had left we rented out.

“Father had one full-size coach, but when I came on full-time coaching, we had two full-size coaches. Mother and one of my sisters was driving for us too.”

Reminiscing, he said the ‘80s was his favourite time to be a coach operator, in particular the mid- to late-80s. “The tours were very popular then. Every tour we did went out full. Me and father would pass one another down the M5. It was more popular then.”

So what happened? Why are coach tours no longer so popular? “I think it’s because people go for the sun now. It’s a lot cheaper than it used to be, going to places like Spain and Tenerife. The ‘80s were good, but would I want to go back? Things weren’t as reliable as they are now, vehicle-wise.”

Looking to the future, Phil sees a mixture of conservatism in terms of his fleet, as well as a need for change: “I hope we can carry on as the same size as we are and carry on doing what we are doing. But you have got to move with the times. Nothing stands still. If you do stand still, you will get left behind.”