Rob Orchard takes a look at the Turas 600S minicoach from the Noone range.

The death of Alan White, founder of Minis to Midis, last year was a great shock as was the closure of this leading minicoach dealer a few months later. The loss of the dealer left Noones, the Irish producers of the popular Turas range of minicoaches, without a UK dealer. In October they rectified this situation with the appointment of Andy Garrett’s Midlands Bus and Coach Sales of Tamworth in the West Midlands as its new dealer.

I caught up with Andy recently to discuss how they were handling the franchise and in particular to look at the Turas 600S medium-sized minicoach. Andy is probably best known for being the proprietor of Solus Coaches. With this hat on he runs a large fleet of coaches, mainly Scania Irizars. The company suffered a fire at its large facility on the Lichfield Road Industrial Estate at Lovell, Tamworth during Christmas 2018 (see B&CB 1512, 11 January 2019). Some of the buildings were damaged but thanks to quick action by the emergency services and staff the fire was relatively quickly contained and prevented a major disaster. The fire also saw the loss of ten vehicles. Being Christmas more vehicles than usual were parked up and parked very closely together hence the relatively high loss of vehicles. Quick action by Andy’s team prevented greater loss. Andy is very grateful for the way the industry responded with offers of help and vehicles coming from all over the country. “It was fantastic,” said Andy. “We had so many offers of help. It meant we were able to meet all our commitments and I thank the industry for that.” 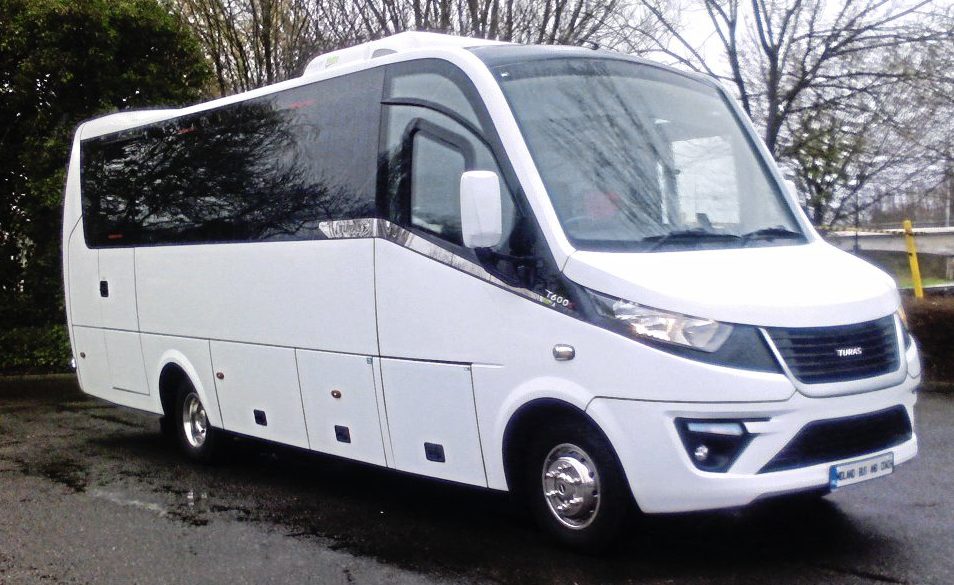 Andy has dabbled in used vehicle sales for some time but admits taking on the Noone franchise is a bit different. The operation is run from the Solus facility which makes a lot of sense because he has all the facilities available there to carry out the commissioning of new vehicles, provision of spare parts, etc.

He has been very pleased with the reaction from the marketplace where customers have been quick to express confidence in the new organisation. To handle the Noone franchise Andy is running the operation but has taken on Steve Peck as his right hand man. In addition he has John Campbell covering the North of England and Scotland. Andy covers the Midlands and Wales himself, while Steve is looking after London and the south. Andy is also looking to recruit another person to help cover the south and south west.

The 900 was the pioneer in the range and is built on the 10-tonne gvw Mercedes-Benz Atego chassis with forward-mounted four-cylinder Daimler diesel engine rated at between 155 and 177bhp matched to a six-speed manual or the Mercedes-Benz Power Shift 3 automated transmission system. 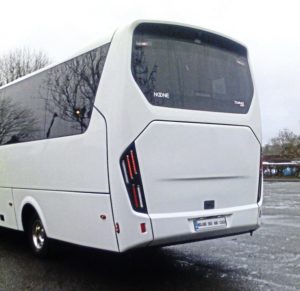 The treatment of the rear end is particularly pleasing

The big difference between the larger Turas and other makes of vehicles that use the Atego chassis is that Noones were able to negotiate with the manufacturer to modify the steering to allow the driver position to be set further back on the chassis, meaning the driver is in line with the front passenger door.

It is fair to say that the Mercedes-Benz Atego chassis, although widely used by minicoach producers, is not universally popular with operators. Noones are the first producer to give operators a choice by now offering the 900S mounted on the DAF LF chassis. 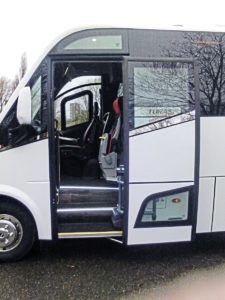 This chassis has an excellent reputation in the truck market and also the DAF dealer network has a good reputation for service and parts supply.

The LF uses the four-cylinder 213bhp, turbocharged diesel engine to Euro VI, matched to ZF six-speed manual or six-speed ZF AS-Tronic automated transmission. It also has a price advantage over

the Atego. This combination should prove popular. I have yet to drive one and see for myself how it compares, which is something I hope to rectify shortly.

The 900 and 900S provides vehicles in the 33- to 37-seat range and are built for Noones in Portugal. The vehicles are up to 9.6m long and trimmed to a high specification, including double glazing, air conditioning and a large luggage capacity.

The Turas 700/600 utilise the popular Iveco New Daily 7.5-tonne chassis cab producing a range of vehicles in the up to 33-seat sector. The Iveco is powered by the 3.0litre 170-180bhp diesel engine matched to the HiMatic fully-automatic eight-speed transmission. The minibus also has a Telma retarder. The vehicles are produced for Noones in Turkey and have proved to be popular both with UK operators but also Irish operators. They continue the Noone tradition of offering a quality body specification, including double glazing and air conditioning plus a large boot.

The Turas 500 is produced in both coachbuilt and van conversion form and utilises the 5.5-tonne Mercedes-Benz Sprinter base. Versions are available with seating up to 19.

The Turas 600S is slightly shorter than the 700 models at eight metres because it uses the 4.35m wheelbase version of the Iveco 70C17 chassis instead of the 4.75m version used on the 700. It can seat up to 29 passengers, although Noones find many people opt for a lower seating capacity giving greater legroom or allowing the fitment of some seats at tables. 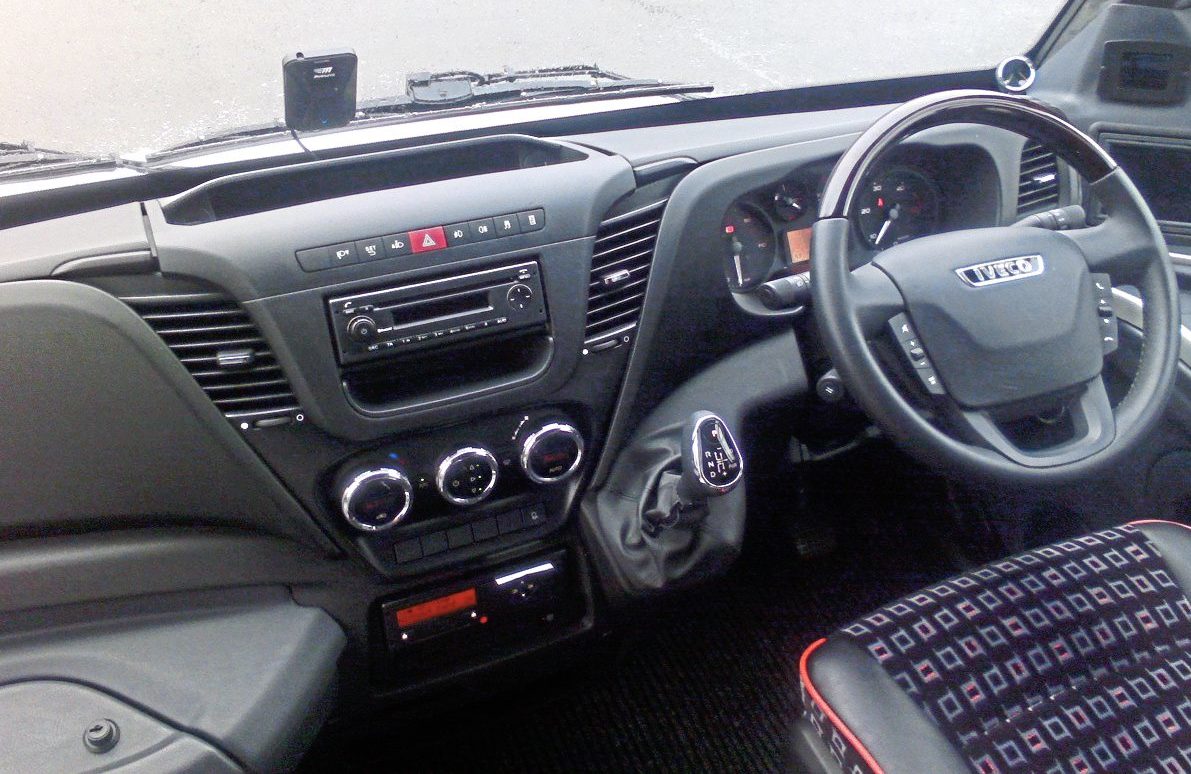 A very popular option is to go for 2+1 seating and a VIP interior. The 29-seat version is popular because of the large boot space. 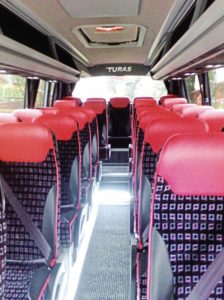 This was matched to the ZF HiMatic fully automatic eight-speed transmission.

The vehicle is also available with a Telma retarder as an option. The front suspension is independent, while at the rear it has parabolic leaf springs. The 700 is generally supplied with air suspension at the rear.

The body is 2400mm wide and 3050mm high. It is fitted with large panoramic, bonded double glazed windows and Spheros 13kW air conditioning. It is fitted with a powered glazed, plug entrance door. This reveals a three step entrance leading to a flat saloon floor. The vehicle has a wood effect floor with carpet to the entrance, gangway and cab area. The interior is soft trimmed and fitted with 29 reclining seats (not back row), trimmed in moquette and leather effect headrests and fitted with three-point belts, arm rests and seat-back nets. There is also a tip-up courier seat mounted behind the entrance door.

The vehicle has full-length parcel racks equipped with speakers, LED lighting and passenger comfort controls. Full draw curtains are part of the standard package. The roof has a large glazed roof vent. 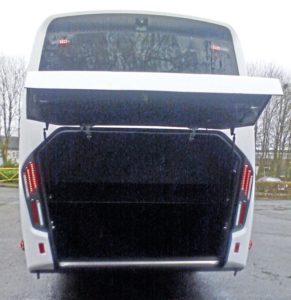 A feature of the Turas 600S is the large boot

The Turas 600s is also fitted with convection heating while Individual USB sockets are fitted in the side wall for each seat row.

Other features are a digital clock and a full sound system with driver and courier PA system.

The vehicle has underfloor side lockers with internal illumination and at the rear a large lift up door reveals a massive illuminated boot. In total the vehicle has a luggage capacity of 4.3cu.m

The vehicle is supplied with a three year warranty on its Mercedes-Benz aspects and a 12-month warranty for the body and fitments.

First impressions of the vehicle are that it is nicely styled with classical, simple lines. The treatment of the rear end is particularly successful. Overall it looks like a well-balanced package. 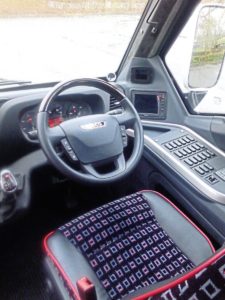 Well-appointed cab. The mounting of body controls on the drivers right is particularly well treated

I had chosen a particularly awful day for my visit to Tamworth with incessant heavy rain. I’ve driven many Iveco New Daily based minibuses and coaches and it is always a pleasure. The three-litre diesel is a delight to drive, both powerful and quiet and when matched with the excellent ZF HiMatic automatic transmission gives a near perfect combination.

I eased out of the Solus yard onto the main road out of Tamworth. Vision through the large single piece windscreen was good and the wipers were set to give nice clear vision. However I did find the positioning of the external mirrors a slight problem. Because of how they are mounted they cover most of the quarter light making them create blind spots which need to be compensated for. You do get used to them pretty quickly but they are a bit disconcerting at first.

Out on the open road the vehicle lived up to my expectations. The ride and road holding were excellent with nice light but positive steering. Because of the wide span of available power you can generally control the vehicle speed using just the accelerator, so use of the foundation brakes is minimal but they are there and they give nice, straight rapid deceleration when called upon. 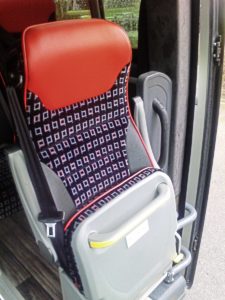 You can also have a Telma retarder fitted for even lower use of the foundation brakes.

Not all the roads were as nice and smooth as one would like, but there were no hints of rattles, squeaks or shocks from the bodywork and no shimmer of the glazing. It was easy to keep the environment in the cab comfortable thanks to the in-dash air conditioning and no misting of the screen or side windows.

Having one of Andy’s drivers with me I took the opportunity to experience the passenger experience. I found the seating to be comfortable with a nice degree of support, excellent vision through the large windows, a comfortable ambience courtesy of the convection heating and the air conditioning and despite having steel suspension a nice comfortable shock free ride. The vehicle was also very quiet.

I took the opportunity of doing some full speed running up against the limiter on the M42. Unfortunately, around Tamworth this is still a two lane stretch of motorway and with the mass of lorries, finding gaps to get some good running wasn’t easy. There was also a great deal of spray but the wipers coped very well. 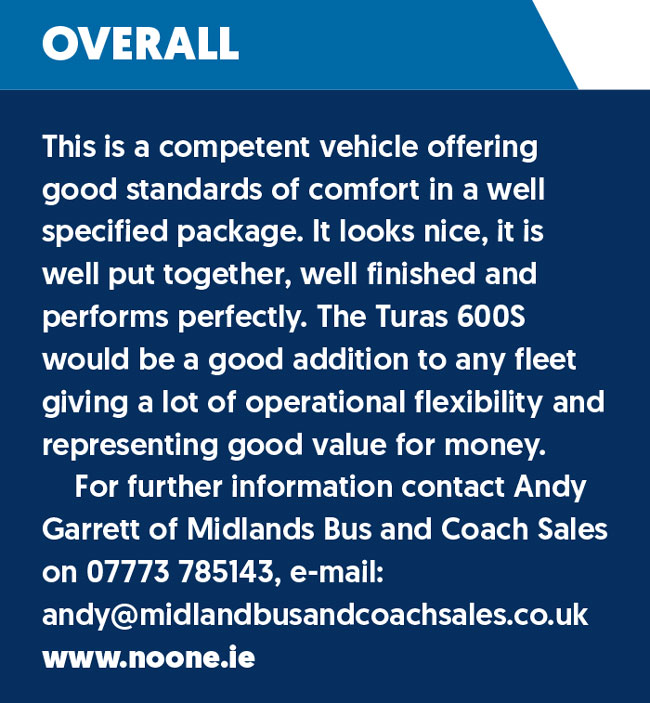