Quantron has launched its new 12m electric bus, the CIZARIS, in an online presentation this morning (16 February 2022).

The new bus model in the Augsburg-based company’s bus portfolio will be launched as an all-electric version (CIZARIS 12 EV), followed in 2023 by a fuel cell drive (CIZARIS 12 H) that uses a largely identical powertrain. Both two- and three-door models with a total of nine interior layouts are available.

The bus will be available to the UK market in right hand drive format.

The launch of the CIZARIS sees the electric vehicle specialist enter into the city bus market, which Quantron believes is becoming increasingly significant due to the European “Clean Vehicles Directive”. The bus bears the company’s new lettering and logo, which have been designed to be more modern and convey a high recognition value on the front (with logo), the rear and behind the A-pillar.

‘Feast for the eyes’

Described as a ‘feast for the eyes’ by Quantron, stylings include a windshield which has been pulled far down and has large radii on the outside, leaving space below for the new logo. The front and rear roof edges are clearly rounded and adorned with an additional front shield, intended to take away the vehicle’s bulkiness and, in conjunction with the refined side graphics, gives it a distinctly three-dimensional impression. The low-floor character of the bus is made clear by the black contrasting centre section, while the roof edge trim at the front and rear puts the emphasis on the battery technology, which is hidden there on the roof outside any crash areas. The bus can have 24 to 35 seats and there is room for a total of 81 to 95 passengers depending on the battery package. The rear end features large taillights, some of which are made of frosted glass or have a light-striped design. 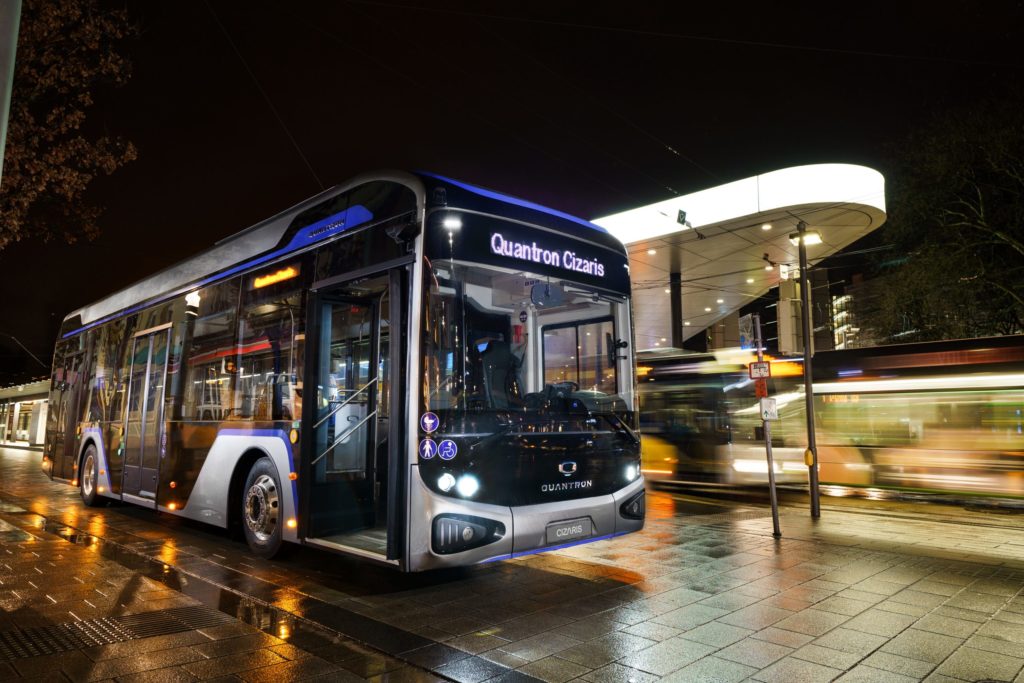 Access is through two or three 1,200mm-wide doors. Pneumatic interior swing doors are fitted as standard and electric exterior swing-sliding doors are also available on request. The front area up to door two is fully low-floor and has keel seats with cantilever suspensions in the case of the individual seats. The seat covers are manufactured using textile digital printing and feature the Quantron logo. The colour scheme can be very easily adapted to suit needs such as those of people with limited mobility, according to the manufacturer. A total of four seat configurations are available for the two-door model, and as many as five for the three-door model. In the rear, the seats are mounted on pedestals.

On the compact engine box directly opposite the optional third door either more seats or a large luggage rack can be mounted. 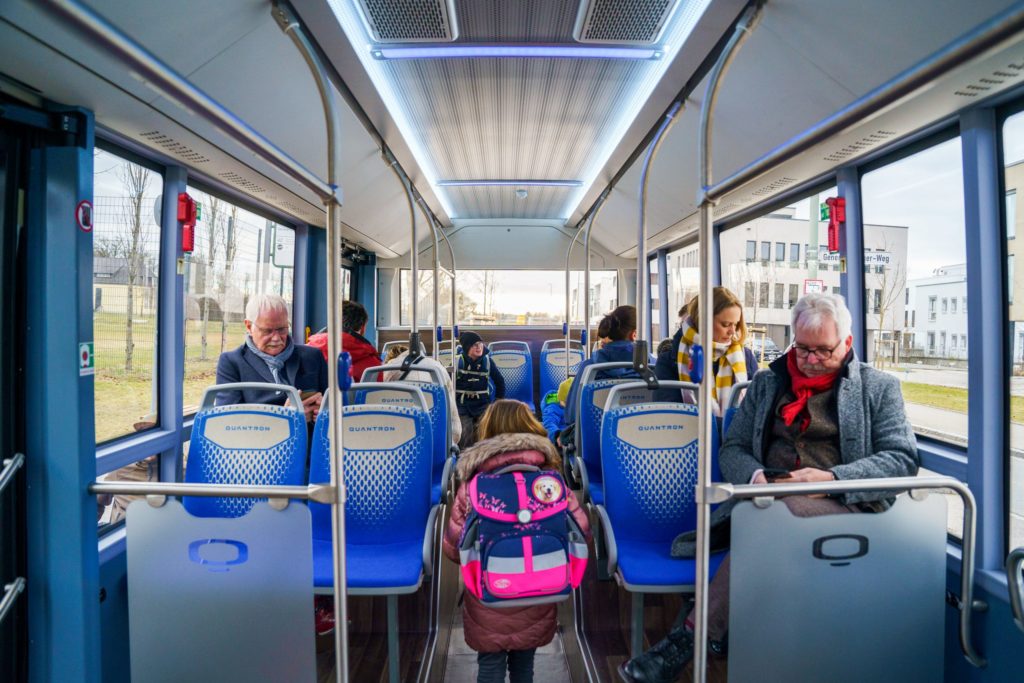 A Valeo heat pump/air conditioning unit with a cooling capacity of 33 kW is fitted. Through what Quantron calls ‘Positive Temperature Coefficient Heating (PTC)’, the total heating capacity can be increased to a total of 50 kW if required. It says the process enables an effective heating output adapted to battery operation with lower energy consumption. Antiviral filters as well as a closed driver’s cab can also be configured.

According to Quantron, the CIZARIS’ perforated aluminum ceiling with indirect side lighting and additional LED lights mounted transversely create the atmosphere of a touring car, especially in the evening and at night. USB charging points can be fitted, either the standard sidewall-mounted USB-A plugs or the optional USB-C plugs under the seats.

Isringhausen or Grammer drivers’ seats can be installed. The driver can benefit from a digital instrument cluster from Actia, as well as high-resolution camera mirror monitors mounted directly in front of the A-pillars and a separate nose observation camera with a large monitor above the cockpit. Safety systems include ABS/ASR, EBS 5.0, ECAS from European production, and the turn-off assistant from Mobileye can also be retrofitted on request. Fire protection is ensured in the rear compartment, in the battery modules and other high-voltage components by means of fire detectors (temperature/gas sensors) and separate powder extinguisher cartridges.

The CIVALIS is powered by lithium iron phosphate batteries and a synchronous central motor from Dana/TM4. With between 242 and 424 kilowatt hours of selectable battery capacity, the roof-mounted battery packs (a maximum of six in the front and six in the rear depending on customer preference) are fast-charged by CATL with 65 to 150 kW direct current (DC) in two to five hours. The matching CCS combo plug is installed on the right, left or in the rear at the customer’s request.

For higher demands, the CIZARIS 12H will have even greater range for intercity travel starting in 2023. 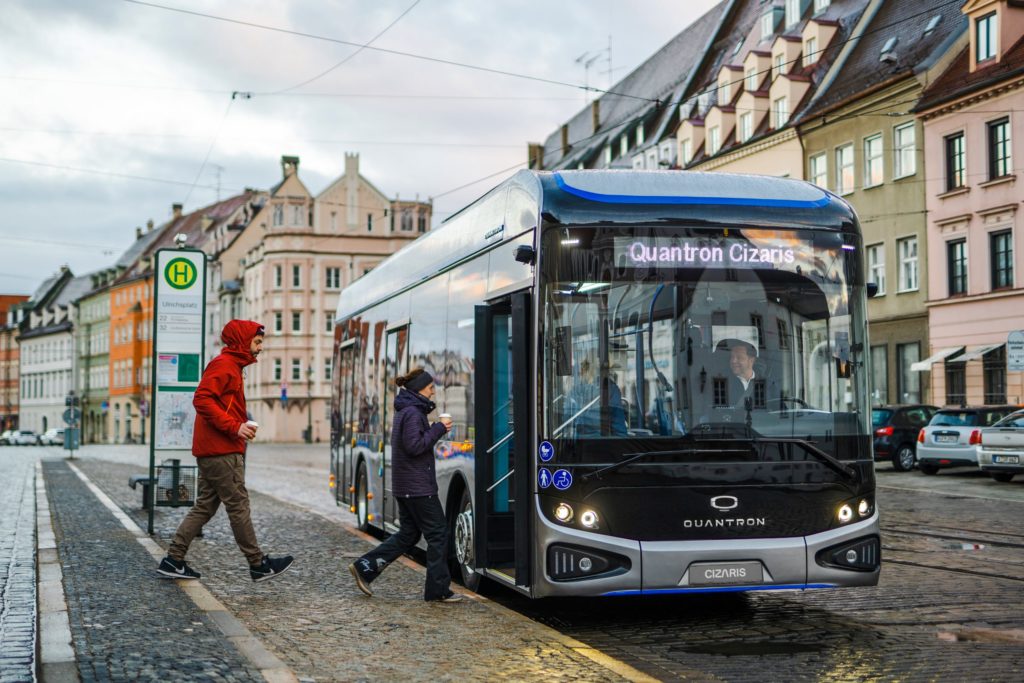 The vehicle-mounted and water-cooled central motor from Dana/TM4 based on the permanent synchronous principle (PSM) is chosen for its low speeds and what Quantron describes as particularly high efficiency compared with asynchronous motors. It has an output of 145/245 kilowatts (nominal/maximum) and a maximum engine torque of 1,055/3,329 newton meters, which is developed without any gear changes. With the introduction of the fuel cell version, an even more powerful powertrain will be used.

The bus’s frame benefits from a cataphoretic dip and other corrosion protection measures, as well as a central lubrication system on the front axle. The warranty terms are two years for the entire vehicle, and eight years or 3,000 charge cycles (or 80% charge capacity – whichever comes first) for the batteries. Extensions or service contracts can also be offered on request. Re-use options for batteries at their end of life can also be offered by Quantron.

Quantron has a network of 700 service partners in Europe, many of whom can also service electric buses.

The Cizaris will initially be launched in Eastern Europe, the Middle East, Scandinavia and Southern Europe. Its launch in the UK, Germany, Austria and Switzerland will take place in the second half of 2022.

Quantron explains the name of the new city bus: the ‘CI’ stands for ‘City’, the central and prominent ‘Z’ stands for ‘Zero (emissions)’ and the suffix ‘ARIS’ is derived from Greek and stands for ‘the noblest/the best’.

The name CIZARIS is also derived from a fertility goddess, Ciza or Cisa(ris). She was venerated by the Vindelici, an ancient tribe who settled in what is now modern-day Augsburg, Quantron’s hometown.