Numbers of fare paying passengers on buses have reached 78% of pre-pandemic figures, according to an industry think-tank.

Bus companies part of industry think tank The Ten Per Cent Club have reported their latest passenger numbers comparing the week ending 5 February 2022 to the equivalent week in 2020, just before Covid’s impact on travel patterns. Its figures show fare paying passengers on commercial bus routes have reached an average of 78% of pre-pandemic figures, with fare payers on tendered routes at 70%.

However, concessionary passenger numbers are considerably lower, at 57% on commercial bus routes and 50% on tendered routes.

Roger French, Secretary of the Club, said: “Bearing in mind restrictions were lifted at the end of January this is a hugely disappointing result. In fact fare paying passengers on commercial routes haven’t shifted above an average of 78% since September 2021 so it now looks as though this might have become ‘the new normal’ for many bus companies.”

There are some wide variations to these figures, with some bus operators achieving a recovery as high as 94% while others are registering figures as low as 69%.

“With Government financial support still uncertain beyond the end of next month, it’s not looking very good for a recovery”, Roger French added.

In outer London boroughs, weekday bus ridership is now regularly at 75% of pre-pandemic levels, according to TfL. Ridership in Hillingdon and Barking seeing levels at around 80%, especially at weekends. While bus ridership has consistently been more than 50% of pre-pandemic levels since April 2021 in London. The recent lifting of restrictions has led to the overall number of journeys increasing by around 8% compared to early January. 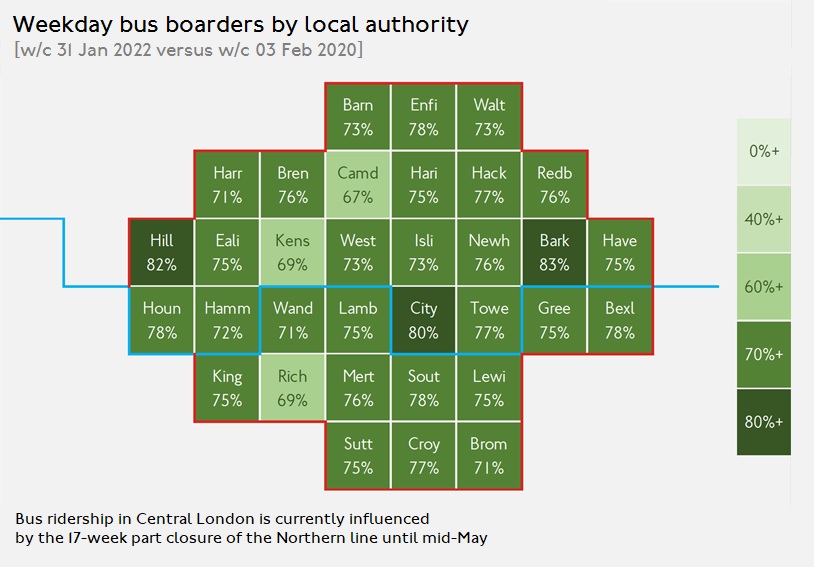 Some bus routes across London, such as the route 90, which goes between Northolt station and Feltham station via Hayes and Harlington, and the route EL2 which links the new Barking Riverside development to Barking town centre and Dagenham Dock station, are now seeing around 87% of normal levels of ridership.

Across London a near-normal service on TfL’s buses, Tubes and TfL-run rail services remains in operation.

New analysis of ridership data by TfL has revealed that, since working from home restrictions were lifted on 19 January 2022, the number of people using the Tube during weekdays has increased by at least 25%. Ridership is now regularly around 60% of pre-pandemic levels during the week, up from around 45% in early January.

One thought on “Patronage figures averaging 78% of pre-pandemic levels”