Many reading this may well have bumped into Bob Winfield, Area Manager at Scania Financial Services. Quite a few might have even done business with him, helping finance your vehicles. But farewells might be in order as Bob switches off his spreadsheets for the last time as he takes a well-deserved retirement on 29 March. Taking over from Bob will be Greg Randall, Scania’s current Bus and Coach Area Sales Executive.

Greg will not be jumping into the role unprepared though. He was selected as Bob’s successor and has worked in a shadowing role since March 2018, soaking up the knowledge and skills needed to succeed once he takes on the new position. Prior to that, Greg has been providing support for Bob over the last four years.

Greg said: “Bob gave 18 months’ notice to retire, so that gave a great opportunity to start the ball rolling. It was a good opportunity to be in a shadow role in the past year.”

He continued: “Part of the Scania ethos is to promote from within. I came in taking on an administration role, then I went on to internal sales, and now I’m out into a full area role.”

In October last year, Greg officially took on the new role, putting him out on the road, in front of customers full-time. His new role is National Sales Manager.

Bob said: “There was never any question about it, it’s a natural progression.”

Life and times with Scania

Bob came to Scania in 2002 to become Scania Financial Services Bus & Coach representative. The company has existed since the 1980s, but it only operated in the truck sales side. Bob said: “There was a change of MD at Scania Bus and Coach who came from the truck side. He saw a benefit in introducing Scania Finance to bus and coach. I got the job in 2002.”

Having entered the finance world in 1977, Bob has worked for a number of different finance companies. He came to Scania from the Bank of Scotland. Since joining Scania, he has been based in the company’s Worksop site since day one of his employment there.

During this time at Scania Financial Services, Bob has grown the business through relationship building with customers. Over those years, he has noticed some significant changes in the industry: “Customers have changed. Small family businesses have declined. I think that’s partly because of the changes in technology and the driver pool declining. 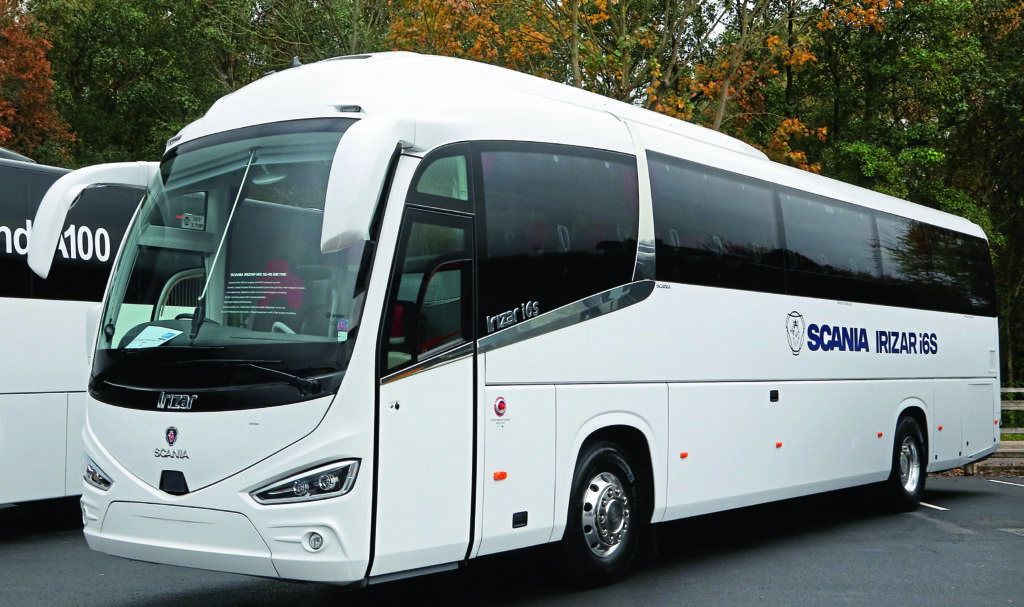 This Scania Irizar can be financed through Scania Financial Services

“The market has consolidated as well. The bus and coach market has gone like the truck industry. We do more operating lease and contract hire now. It’s now about 50/50 hire purchase and operator lease. That was never the case in the early 2000s. Hire purchase was predominantly what they wanted then. Now there is not so much interest in owning the vehicle.”

Greg added: “It means you don’t have the hassle at the back end of selling it.”

“I think that will keep going,” Bob said of this sea-change. “Vehicles are getting so technical. People now need a laptop and a degree to keep them going. So why not have it on lease.

“I’ve seen the industry continue to move from a cottage industry, with little companies moving to do business like a professional operation.”

Taking some time to think about his times in this sector, he said: “I’ll definitely miss it. The reason I got the job was because I was dealing with Scania with my previous employer. There are a lot of people at Worksop who have been there forever, there is still that nucleus of people. I’ll miss the interactions with customers, people I have dealt with since 2002.

“Part of what we’ve been doing in 2018 is to go round to these customers and put Greg in front of them. In this industry, they end up not being just customers, but in a way like distant friends.”

“I’ve got some big boots to fill,” said Greg on taking over Bob’s position. “But from my point of view, it’s a fantastic opportunity and I’m very grateful to the company I work for, for making it happen. To be able to progress like this is fantastic.”

Greg has experience of working in the automotive industry for the last 14 years, during this time working for a major car manufacturer, involved in various contract management duties before joining Scania Financial Services. Outside of his profession, Greg is a serious ice hockey player, having played at both a professional and semi-professional level, representing his country at all age levels.

What is he looking forward to in this new role? “Bob said it earlier, the connection with customers. In bus and coach, customers aren’t quite like customers. That hasn’t been my experience in other jobs. I find it a fantastic atmosphere to be in.”

Greg is taking the reins over smoothly, not overhauling the way Scania Finance operates in the bus and coach sector. “To be honest, I don’t really want to change anything about how we are doing business.”

Bob explained: “All that will happen is Greg has stepped into my shoes; but in Milton Keynes, where Scania is based, all will be the same. Everyone else in the workflow in finance will all do the same thing.”

Scania Finance affectively lends its own money and administers the loan from its Milton Keynes headquarters. As well as vehicles, there are other assets it can finance too. Greg said: “That’s the dynamic change we have had over the years.”

As Greg takes up the new role and Bob says goodbye, Scania has started its first full Contract Hire campaign. In its marketing material, the company asks operators to consider it an Operating Lease with the added benefit of fixing repair and maintenance costs. It works by the customer hiring the vehicle for a fixed period and agreeing to a maximum annual mileage. The customer’s routine vehicle repairs and maintenance are taken care of, then at the end of the contract, the option is given to extend the lease or give the vehicle back to the dealer.

An advertised benefit is for fixed monthly payments where VAT is claimable on each rental and the payment is allowable against the customer’s tax. Fixed monthly payments will cover the majority of the vehicle acquisition and operating costs (excluding fuel and drivers). Scania Assistance is included in the contract, providing roadside repair and recovery 24/7.

Scania also advertises the point of there being no risk or administration at the end of the agreement providing the vehicle meets the return and mileage conditions.

I don’t think anyone else does that

Bob said: “I don’t think anyone else does that. But we have pushed the boat out to five years. It’s a terrific offer, to fix everything at five years.”

Greg said: “What it comes down to is our understanding of customers. We can offer that fixed cost.”

He continued: “We have got the best part of 90 outlets in the UK. And wherever the coach is, with Scania Assistance 24/7 you have one phone number to call and wherever you are in western Europe, you will be assisted.”

Another area Scania is going into is offering telematics solutions to customers. “We are looking at developing that into a finance package as well,” said Greg. “It has full-on, in-house functions from Scania and goes hand in hand with our driver training centre.”

As these developments take off, Bob is looking forward to playing more golf. He is also a keen cyclist; so keen in fact that he is planning an epic bike ride from Lands End to John O’Groats. But if he was not retiring, he is clear what he would be doing: “If I wanted to stay at work, I would stay at Scania.” 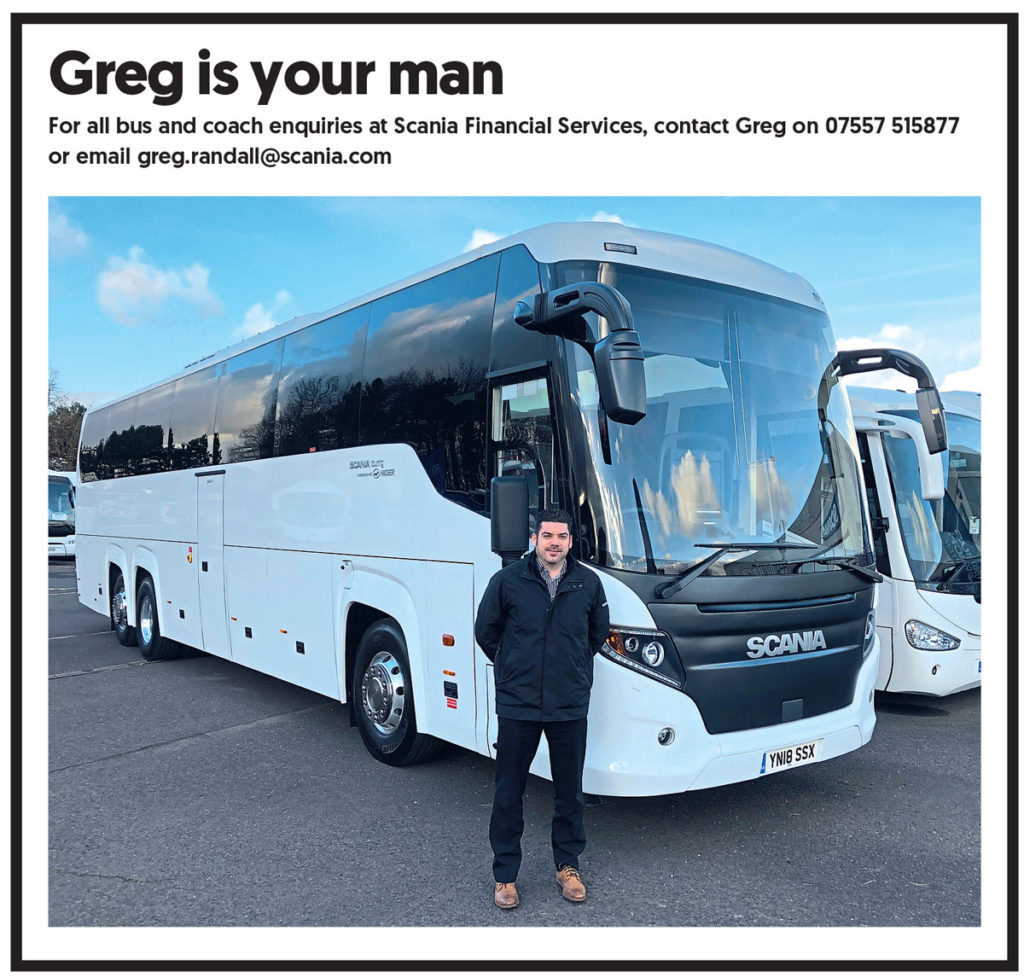