Nottingham City Transport (NCT) has crowned its tenth Bus Driver of the Year.

The award was made during the operator’s annual Excellence Awards, recognising and rewarding engineers, teams and unsung heroes. 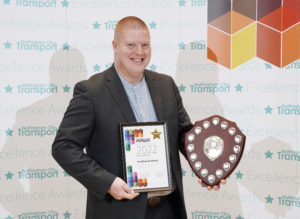 Driver of the Year Jonathan said: “Winning Driver of the Year means a lot to me and my family, who are filled with pride and joy that I won and it was great to have them there on the day to see me collect my prize. It feels fantastic to be up there with the past winners who still work for NCT, who I know well professionally, and to be a role model for others starting out their career with NCT.”

Eleven bus drivers received Customer Commendation Awards for going above and beyond and two colleagues received Special Recognition Awards for their outstanding efforts throughout Covid and NCT’s cyber-attack last summer. Hosted by NCT’s “voice of the buses”, David Lloyd, over 200 people attended the Excellence Awards, held at Nottingham’s Albert Hall.

David Astill, NCT Managing Director, said: “Congratulations to all of the finalists and winners and it was great to celebrate the achievements and successes of colleagues from across NCT. Well done to Jonathan on being crowned the tenth NCT Bus Driver of the Year, who received some very complimentary remarks from the mystery traveller and is a great front line ambassador for NCT.”