On 16 October 1897, Nottingham City Council took over the Nottingham & District Tramways Company, who operated horse drawn trams and buses within the city. 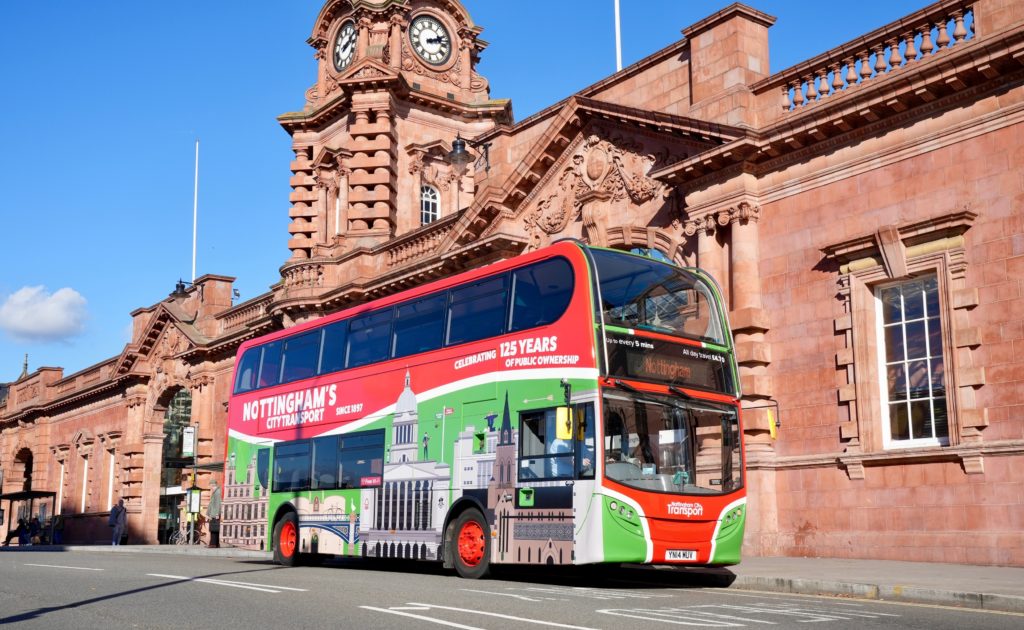 NCT has evolved to operate electric trams, trolleybuses, petrol and diesel buses and is now home to the world’s largest fleet of bio-gas buses.

To mark this milestone, NCT has unveiled a special Nottingham-themed bus, using the red, green and white of the Nottinghamshire Flag as its base. The bus celebrates everything that makes Nottingham great and has more than 20 references to our city hidden amongst the design, for people to spot and learn about.

“We are very proud at NCT to have served the people of Greater Nottingham since 1878″ – David Astill, Nottingham City Transport’s Managing Director

David Astill, Nottingham City Transport’s Managing Director, said: “We are very proud at NCT to have served the people of Greater Nottingham since 1878. At the current time there is much political debate as to whether there may be a greater role for local authority owned bus operation in the years ahead, and so it is right that we should use this opportunity to celebrate our continued municipal ownership which started 125 years ago this month.”

“We are extremely proud that 125 years on, we still have our publicly-owned bus company in Nottingham” – Nottingham City Council’s Portfolio Holder for Highways, Transport and Park, Cllr Audra Wynter

Nottingham City Council’s Portfolio Holder for Highways, Transport and Park, Cllr Audra Wynter, said: “We are extremely proud that 125 years on, we still have our publicly-owned bus company in Nottingham – one which is constantly improving its services, is recognised nationally as one of the best bus operators in the country and is helping us towards our carbon neutral targets with cleaner, greener buses and giving people a great alternative to the car. This is thanks to the strength and foresight of the council’s leader during the 1980s bus reforms to keep Nottingham City Transport publicly owned.

“NCT is as much a part of the fabric of the city as Goose Fair, the Council House lions and many of the other local icons featured on the special bus celebrating 125 years of public ownership. We look forward to helping it to continue leading the way in the years ahead.”