Marchants wraps up for steam railway

Marchants has wrapped one of its buses with promotional graphics for the Gloucestershire Warwickshire Steam Railway (GWSR).

The dramatic bus-wrap which features a train crossing the spectacular Stanway Viaduct on the sides, and an almost life-sized head-on image of a locomotive on the back, will be seen in and around Cheltenham over the coming months.

The heritage railway, which operates between Cheltenham and Broadway, is emerging from Covid restrictions and is expected to return to normal operation from 20th July.

“I even managed to specially re-register the vehicle to V21 GWR!” – Roger Marchant, Marchants Managing Director

Roger Marchant, Marchants Managing Director, said: “This is a really exciting opportunity for us and for the railway. It’s the first time that we have featured a full ‘wrap’ on an entire bus – it’s certainly going to be a striking advertisement for the railway!

“It has been such a pleasure dealing with the GWSR. They were kind enough to help us out during the first lockdown when the Covid crisis really began to bite and we had to relocate one of our depots at short notice. The railway kindly allowed us to store some of our vehicles at Toddington.

“We were delighted to offer some of our bus backs for GWSR advertisements and now the idea has developed into this ambitious bus wrap. I even managed to specially re-register the vehicle to V21 GWR!” 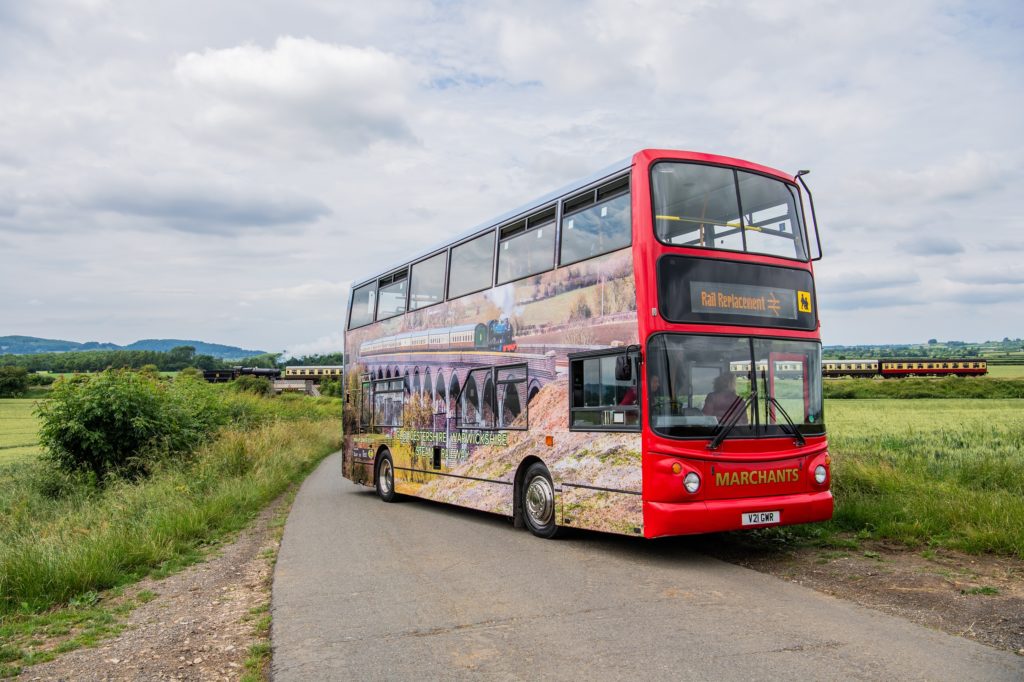 The Gloucestershire Warwickshire Railway teamed up with Marchants Bus Company in Cheltenham to wrap a double decker bus with two of Jack Boskett’s photographs of 7903 ‘Foremarke Hall’ and 35006 ‘Peninsular and Oriental SN.Co’ as a moving billboard to promote the heritage railway.

The bus is a Volvo B7 Alexander ALX 400 which worked in London before being acquired by Marchants. “It’s an excellent and reliable vehicle,” added Roger Marchant, who took over management of the 73-year old family business from his father. “We will be using it on a number of school routes as well as special contract work. The railway is at liberty to use the vehicle on special occasions, too!”

The pictures were taken by Jack Boskett, a Tewkesbury-based professional photographer and volunteer on the GWSR.

Richard Johnson, the volunteer Chairman of GWSR Plc, said: “The Cotswolds is a popular ‘staycation’ destination and perhaps all the more so while overseas travel restrictions remain. Putting pictures of our railway on a bus could hardly be a more dramatic message!”

The GWSR has had a long and close relationship with Marchants. Added Richard Johnson: “It’s a highly respected local company that we’re proud to be associated with. This project has certainly cemented that relationship and we look forward to continuing to work with this important local family business in the future.”