Craig Temple of Yorkshire independent bus-operator, Connexions Buses, reflects on the driver shortage, franchising and his love for Scanias

When you arrive at a depot and one of their engineers is hopeful you are coming for an interview to get behind the wheel of their buses, you know the driver shortage is being felt. Craig Temple, MD of Connexions Buses in Tockwith, near York, certainly is feeling the effects of the lack of drivers.

Sitting down with Craig, he explained what the operation did to cope over the recent lockdowns: “It was a question of ‘who do we furlough?’ We looked at who had to shield or whose partner had to shield. We only just had enough drivers. The ones we still had on were just great over that period. I drove two or three days a week too. To be honest, there was nothing else to do. It wasn’t stressful at all then; it was lovely.

“We had some drivers who were happy not doing anything while on furlough. But then I had them ringing me asking when I was going to bring them back, which was nice. It was nice when they did come back.”

“With coach operators not doing anything, we thought maybe some of their drivers would be looking for work. But that didn’t happen” – Craig Temple, Connexions Buses

As Connexions Buses services got off the ground again following the lockdowns, the lack of drivers took Craig somewhat by surprise: “I thought we would be awash with drivers. With coach operators not doing anything, we thought maybe some of their drivers would be looking for work. But that didn’t happen. It was peculiar. “I think people found they were living off 80% of their pay on furlough and they realised they only need work four days a week.” 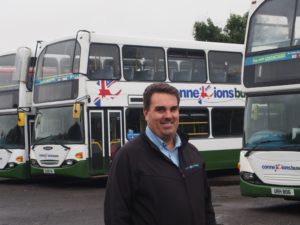 “I’m not totally against franchising, but the devil’s in the detail” – Craig Temple

The company did not have any drivers lured over to become full-time delivery drivers, which Craig says is a plus. However, it does have some drivers who drive buses and delivery vans. Drivers tend to join Connexions Buses from the larger operators in the area, such as First and Transdev.

Craig said: “We have had drivers that didn’t feel like they fit in at other companies who join us and become our best drivers. We like to give more freedom.”

The lack of PCV drivers is not the only problem now the country is getting back on its feet again. Traffic has returned to proving as troublesome as it was pre-pandemic.

Craig said: “We were lulled into a false sense of security in lockdown. The roads were less busy, it was absolutely beautiful. But all of a sudden it built back up to where it was before.

“It’s got so bad that I might have to look at re-timing some of our services. I don’t like changing the timetables.”

Connexions Buses was an early adopter of the Ticketer electronic ticketing machine (ETM) and has recently upgraded its systems to incorporate contactless payments. Craig said: “EMV take-up in this area has been unreal. Every operator in the area now has contactless. Ticketer also supplies our BODS data too. Jon Clarfelt from Ticketer is just fantastic, I can’t sing his praises enough.”

Devil’s in the detail

Despite the rise in traffic, bus patronage is still lower than 2019 levels, according to Craig. Will it come back? “I think that if the contents of the Bus Back Better and BSIPS (Bus Services Improvement Partnerships) documents happen and they work, then it will. If the roads are wide enough, then I think they should put bus lanes in. If things like that happen, then they are the first steps to getting people onto buses. If people see the bus is the faster way, when they are sat out in their car in traffic, then they will get onboard.”

Bus franchising has been another political matter Craig has been paying attention to. He said: “I can see where local authorities think they get their benefits from with franchising. The difficulty is, people view it from the past with rose tinted glasses. A lot more people used buses back then, but there was not the traffic there is now. It wasn’t as good a time as people think.

“The local authorities need people in the industry to design how [franchising] would work. I would volunteer for that” – Craig Temple

“There has been some talk of there being some sort of financial benefit within the franchising agreement, such as incentivising increases in patronage. I’m not totally against it, but the devil is in the detail. The local authorities need people in the industry to design how it would work. I would volunteer for that.” 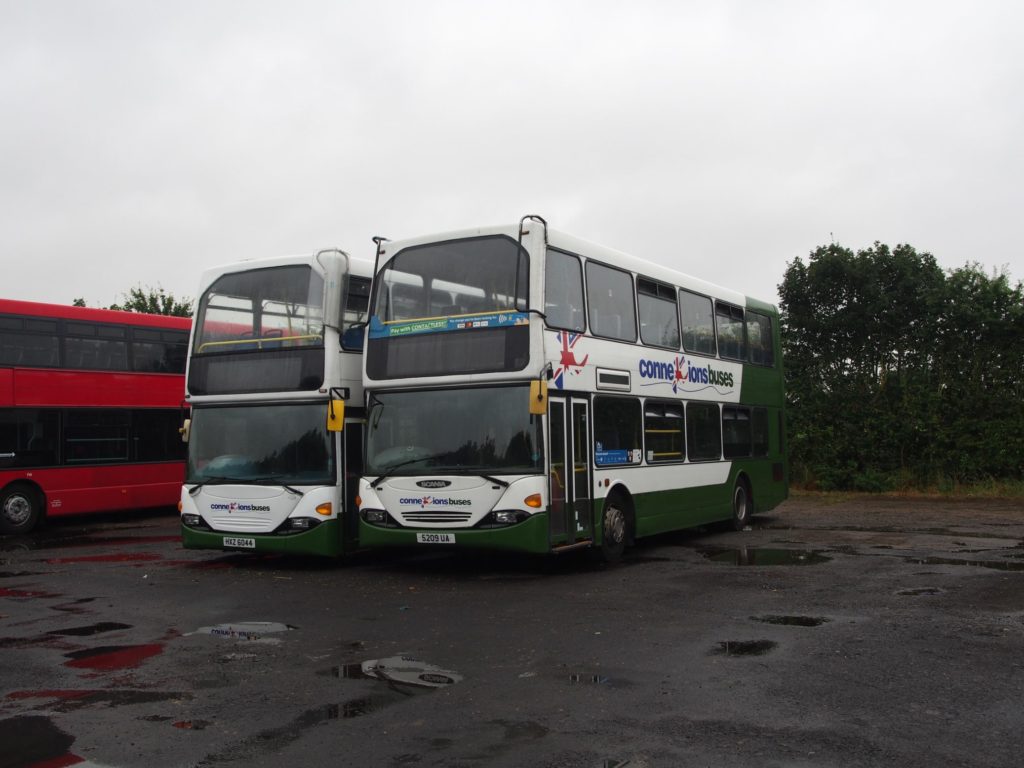 He noted some local authorities are more pro-bus than others. In particular, he believes City of York Council is very much in favour of buses.

Post-pandemic in York, patronage has fluctuated, according to Craig. The same cannot be said for Harrogate, which is particularly low on passenger numbers. Leeds, on the other hand, has been relatively busy all the way through. Craig said: “I would like to think it will be a slow trickle back to previous numbers. But it’s hard to tell.”

He notes Lynx in Norfolk is seeing 80% of normal patronage on its leisure-based bus services, whereas his are at 60%. “It seems very different by area,” he said.

The Coronavirus Bus Service Support Grant (CBSSG) has been a real help to Connexions Buses during this period. Craig is interested in the role the Bus Service Improvement Partnerships (BSIPs) project will play in the future of buses. “It would be great to get together and say we want a bus lane there and bus priority here, for all of us to say something together. It should come across as a strong argument.”

He believes his local CPT representative, Andrew McGuinness, can help with getting operators to provide this cohesive voice to enact pro-bus changes. Craig said: “Andrew worked at Nexus before, so he is from that background of operators working together.”

As well as the CPT, another trade body Craig is part of is ALBUM. In a recent meeting of this group, he highlighted a comment made by ALBUM Chairman, Bill Hiron: “He said he seems to think the underlying theme in Government at the moment is the Treasury has realised how much it is spending and has realised it can’t do this forever. Will the money last long enough for the industry to fully recover?”

Switching subjects, Craig took to the topic of green energy powering fleets: “Diesel engines will eventually be out. But we can’t run electric here. I think hydrogen could be the way forward.”

He was positive about a Yutong electric bus from Pelican Bus and Coach he has driven: “In terms of the drive and build quality, it’s really good. It’s lovely to drive. There is lots of thought that has gone into it.” 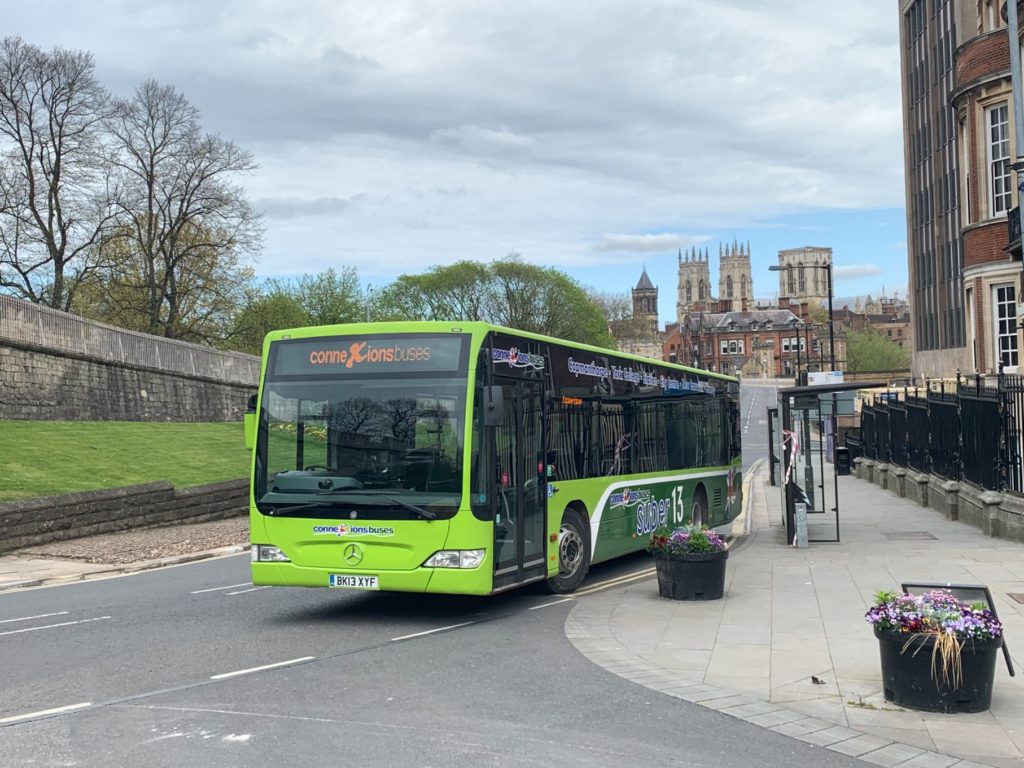 Not all of Connexions Buses’ fleet are Scanias. This Mercedes-Benz Citaro is a break from the norm

His own fleet has a PVR of 36 when schools are open, but the fleet is 41-strong. There are a couple of buses he rents out and the extras provide spares in case a vehicle needs work doing. The average age of Connexion Buses’ fleet is approximately 12-years-old. The fleet is highly standardised, the bulk of it consisting of Scanias. Outside of the Scandinavian marque, there are four Optare Solos and one MercedesBenz Citaro.

Craig said: “I don’t see the point of buying new, especially when you don’t know what’s happening in the future.”

The first vehicle to enter Connexions Buses’ fleet was a 1993 Scania bought from Newport Bus, an operator that has been a regular source of vehicles for the company. Craig is a regular customer at Ensignbus in Purfleet.

He said: “We tend to get two or three from them every year. We will shortly be having another four from them: Scania N230s, ex-RATP Dev. They are superbly maintained from RATP-Dev. We have had five or six from them and they are really good.

“Ross Newman at Ensignbus is really great to deal with. He looks after us. If he has any Scanias coming in, he knows to ring us.”

One of the best deals Craig has had was a swap for Connexions Buses ADL Enviro400 for four former-Ipswich Busesowned Scania OmniCitys. Craig says he has just bought four Scania L94 buses from trentbarton, which he is putting in service in Harrogate. He said: “They have only recently been refurbished.” 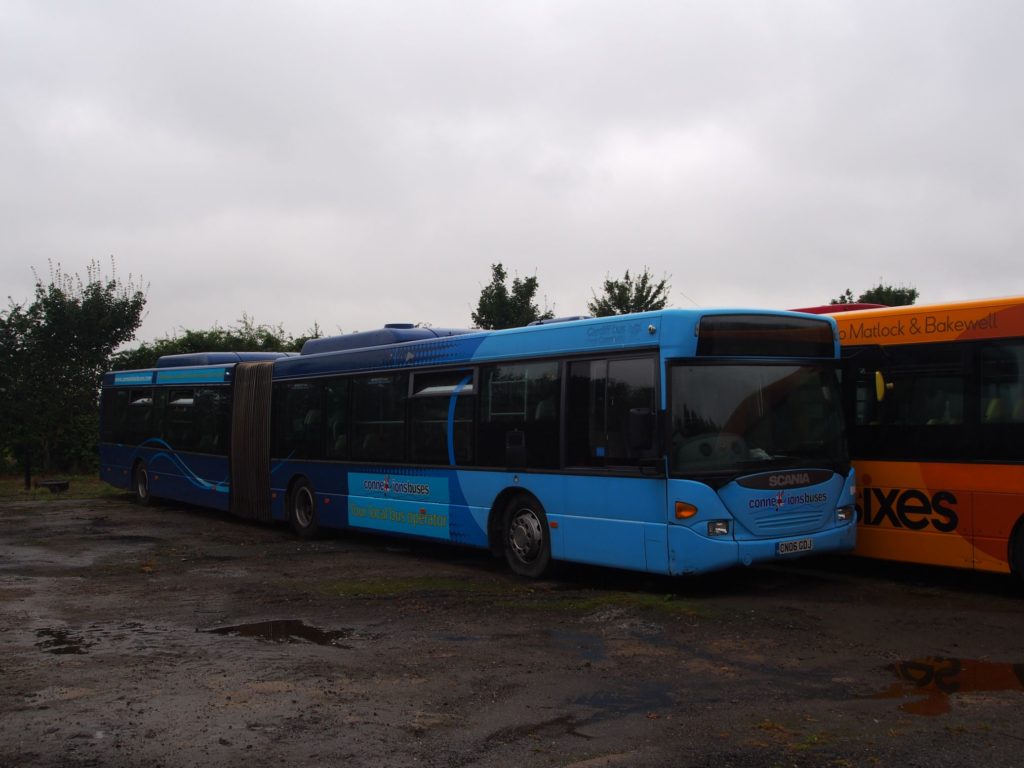 On Scanias, he said: “They just don’t go wrong. And the back-up from Scania is excellent. We use Scania Thirsk and Scania Normanton. They are really good.

“One of the only problems with Scanias is there are a couple spots where they can corrode. But as soon as we buy them, we can sort that out. But they are good mechanically, they don’t let you down.”

Most maintenance and painting work is done in-house in Connexions Buses depot workshop. Craig said: “We fit our own glass and tyres, we do it all.”

On the subject of tyres, Connexions Buses began rolling out Bridgestone tyres across the fleet after good first impressions following its purchase of some used buses from First that had this make fitted. Impressed by them, Craig had the whole fleet changed to Bridgestone. He now fits a range of tyre brands, including Michelin, Goodyear and Bridgestone.

Craig said: “We just try to fit good quality tyres. We do a lot of miles. With cheaper tyres, the rubber isn’t as hard, so you worry about having a blow-out.”

Parts are often supplied by HS Atec, part of the Alliance Automotive Group. “They are spot on,” Craig said. “They have loads of OE components at a great price.”

MasterPart Truck and Bus in Worksop is another regular supplier to Connexions Buses, as is Partline Automotive. Connexions Buses’ latest purchase for its workshop is a VLT roller brake tester. The equipment is the same one used on the MOT test lane it uses.

Craig said: “I take all my buses for their MOT and I asked at the test lane what rollers they use. And they say VLT are the best. And they are good.”

The company has also invested in Totalkare mobile column lifts. Craig said of these: “These new ones go higher than our last set, which is great when working on buses.” 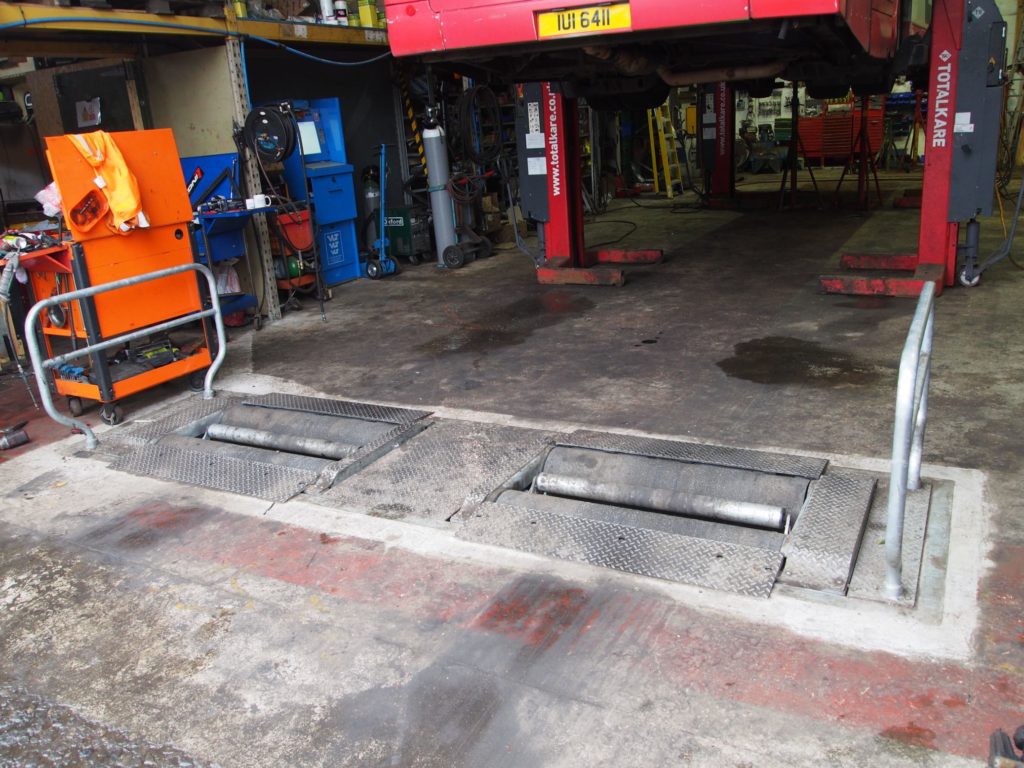 The operator has recently had this VLT roller brake tester installed

Connexions Buses also takes care of maintenance for a fellow operator’s fleet based in Leeds, whose friend is a regular customer of Craig’s for buses. Craig said: “It’s a good market for selling at the moment. Quite a few people ring us enquiring about vehicles of the age we operate. There isagood market for them. We are selling ‘05-plates now.”

Reflecting on the nearly 20 years the operation has been running, Craig said: “When we started in 2002, to think we would be operating ‘05-plates, never mind selling them, I would have thought it was great.”