“Not an easy message” was Jo Bamford’s response to the Government edict not to use public transport. It was however a spur for the business to highlight to Government what it could do with investment in buses to drive significant long-term improvements in air-quality and create jobs. He recently announced plans that could see his newly acquired Wrightbus business in Ballymena put 3,000 hydrogen powered buses on UK roads by 2024. Getting the message over now and filling the factory is crucial to Jo in supporting his family company, JCB’s philanthropic responsibility to keep as many people in the business as possible and for the business to flourish.

Wrightbus has been involved significantly in manufacturing zero tailpipe emission hydrogen fuel cell vehicles for many years, supplying those used until recently on the RV1 route in London and working with the H2Bus consortium established in summer 2019. A hydrogen powered fuel-cell electric Streetdeck double-decker was shown by Wrightbus at EuroBusExpo in 2018 and is the basis model for a number of projects already initiated across the UK. 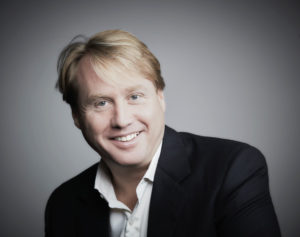 “The job now is to delight the customer” – Jo Bamford

Jo Bamford was already working with the H2Bus consortium before the acquisition of Wrightbus through his Ryse Hydrogen business, which is developing commercial production and distribution facilities for hydrogen to be used across a wide sphere of transport operations. Ryse Hydrogen exploits the potential of excess production from renewable electric generation sites, using this otherwise wasted opportunity to produce ‘green’ hydrogen by electrolysis and hence store the surplus energy. Compressed into tanks, it can then be transported to dedicated refuelling facilities. The company is developing a hydrogen production plant in Kent, and plans to build four more over the next four years. It also has back up options from industrial hydrogen production facilities to provide resilience.

Jo believes operators will welcome the benefits of hydrogen fuel cell over battery electric power, particularly in the longer term when electric prices will need to rise significantly to cover the cost of additional generation, transportation and distribution assets to meet the growth in demand. The immediate benefits are the ability to cover the full range of duties currently undertaken by diesel vehicles (30% of routes are not suited to electric operation), the flexibility of vehicle allocation and the diesel level refuelling times (around seven minutes) meaning there is no need for operators to change their procedures.

The cost of hydrogen fuel cells has often been cited as the key blocker for their uptake but working with Ballard, described by Jo as “the gold standard at the moment with 12 years experience,” the installation costs are now seen as comparable with battery technology for double-deck vehicles and would fall closer to diesel with very high volume take up. Running costs with Ryse Hydrogen’s supply are expected to be similar to diesel. 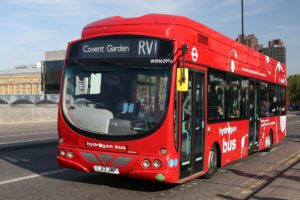 When Jo Bamford acquired the Wrightbus business in autumn 2019, just 50 staff remained to form the nucleus of the new operation. By the time of the enforced shutdown due to COVID-19, this had risen to nearly 700 and there was considerable optimism that all 2020 capacity would be taken up by operators. In mid-February, at the announcement of Rotala’s 160 vehicle order, Sales Director John McLeister indicated that commitment was already at 80%.

Orders taken over as work-in-progress are being delivered, including a significant number of Streetdecks for First in Leeds. Following the COVID-19 shutdown, Jo expects work at Ballymena to restart on current orders in mid-June but is not now looking at the same volume for the year, the hydrogen capability message being part of the plan to mitigate against operators not placing the previously expected orders.

Jo said that, “he felt quite humble about how the company had been supported by the industry,” referring to the positive response by both customers and suppliers to the new operation. The company intends to continue with its current supply agreements so far as the suppliers are able to survive in the post COVID-19 world. 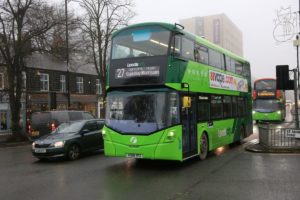 “The job now is to delight the customer” added Jo, aware of some of the quality and support issues with pre-Bamford production vehicles. From his background, the philosophy is that the role of the salesman is to sell the first unit with quality and service selling further units. On this basis, he is bringing the JCB ethic of quality and continuous improvement to the business, ensuring the contribution of the whole workforce with the message: “Every one of you has to think of how the customer would want to receive the product.” Production start-up had not been rushed to ensure that it re-started in the correct manner.

In addition to the headline hydrogen bus programme, diesel production will continue and a new battery power option will follow, each mode then being subject to continuous improvement and development. As the focus moves towards zero emission options, the range will continue to encompass both single and double-deck vehicles suited to a global business although Jo stressed it was important that the company gets it right for the business it has today which is 90% for the UK market. Looking at the potential for hydrogen vehicles across Europe beyond Wrightbus’ traditional markets, the H2Bus website shows graphics of 12m and articulated single-deckers with current Wrightbus styling in addition to the Streetdeck.

Since Jo Bamford spoke to Bus and Coach Buyer, Wrightbus has issued a statement saying that a tough decision had been made to make 35 permanent employees redundant and reduce the agency staff workforce by 90. Despite this, CEO Buta Atwel confirmed that the company’s vision is still to achieve a workforce of 1000 by the end of 2021 aligned to a future in zero-emission vehicle production.