As Storm Dennis struck the nation, the bus and coach industry has been striving to keep the nation moving.

In flood-hit York, the city’s bus operators put commercial competition aside to get passengers safely to their destination by accepting rival companies’ tickets. In Scotland, the extreme weather meant double-deckers were banned from using the Forth Road Bridge. Rail replacement services were out in force too, with the storm causing damage to railways.

A picture in the press showed an empty coach in Mawley Oak Travel livery half-submerged in flood water in Tenby Wells.

B&CB’s West Midlands-based features writer, David Cole, reports the storm has brought carnage to Worcester, with the Severn at levels not seen ‘since at least 2007 and probably earlier’. It caused both bridges over the Severn to be inaccessible due to their approaches being blocked. The result is a city cut in half with a bus service on the higher ground on both sides. Linking them up, the council has put in place a shuttle service of high floor coaches with ferry lifts up over the city centre bridge and through the flooding in New Road by the cricket ground. For this, Astons is providing a number of older Scania coaches, including an Omniexpress and a couple with Berkhof Axial bodies.

David said: “To my knowledge, this was last done in 2014 (almost exactly six years to the day), since when New Road has been raised to cater for the level of flooding normally expected. At least in 2014, buses could reach the other side of the city via the ring road bridge but the approach to that from the west is flooded, possibly due to record levels of the Teme which joins the Severn there.”

The bus station exit and roads nearby are flooded so the otherwise little affected east side services including the First-operated Salt Road to Bromsgrove are having to load in the one street still open northbound through the city centre, which is heavily congested.

Cardiff-based Ferris Holidays is left calculating the damage caused and clearing up the mess at its site following flooding. 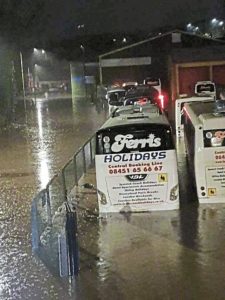 Storm Dennis caused flooding in the Cardiff and wider south Wales area. The damage left behind at Ferris’ yard was described as ‘shocking’ on the operator’s Facebook page. It said: “Our ground floor offices are ruined, garage in tatters, many of our drivers’ cars affected very badly and we are currently unsure of what extent the damage to our coaches has occurred. Most importantly our night watchman, who was stranded, got out safe and everyone has avoided the dangers brought by our friend Dennis!”

Despite the damage, the message from Ferris is resolute: “Life must go on and we will not allow this to hold us back! There may be some technical issues affecting us over the next couple of days but otherwise we are going to work as hard as possible to make it ‘business as usual’.”

At Cray Reservoir, Powys, South Wales, 132.8mm of rain was recorded between 7am on Saturday 14 February and 8am on Sunday 15 February. The average rainfall in Wales for the month of February is 110.8mm. The Met Office issued a Red Warning for rain.

Bakers Dolphin has saved a school ski trip after Storm Dennis threatened to put a stop to it.

The 47 Bristol school children from Clifton High School, Bristol were due to fly from Bristol Airport to Nice on Saturday morning. However, their flight had been cancelled because of the bad weather and there was little prospect of seats being available for days. Bakers Dolphin were told about the problem and worked through the night to make a coach available; picked up the children at 9am on Saturday; booked a space on P & O ferries and the children were on the slopes by Sunday.