High-capacity two-axle coaches have generally run out of space with 57 seats in them, especially with a toilet. VDL’s solution is an extra half a metre in length, which achieves 61 passenger seats. We take Moseley’s demonstrator out for a ride to see if it ticks all the boxes.

The quest for high capacity in two-axle coaches is nothing new, with a target of 57 seats and a toilet the usual aim, most coachbuilders managing this within around 13 metres.

Generally, above this number seat pitch becomes a compromise between capacity and comfort, creating a vehicle you’d avoid sending out for rugby supporters and for many other groups. But what happens if you add another 50cm to the length?

VDL’s Futura FHD2 13.5-metre packs a mighty 61 passenger seats into that extra half a metre, making it one of the highest capacity coaches without going for three axles or 2+3 seating. It’s a coach model with a reputation for being among the best tourers around in more standard lengths to 13 metres, but how does it fare with four seats ahead of most of the competition?

The 13.5-metre variant does this not by increasing overhang but extending the wheelbase from its 13-metre sister, and we wondered how this translates into its handling. One thing was for sure – the Coach Stig liked the idea of an extra four seats.

The coach – model FHD2 135 – is very familiar in styling now; an integral, of course, and with muted echoes of the Futura’s original ‘pregnant’ front. 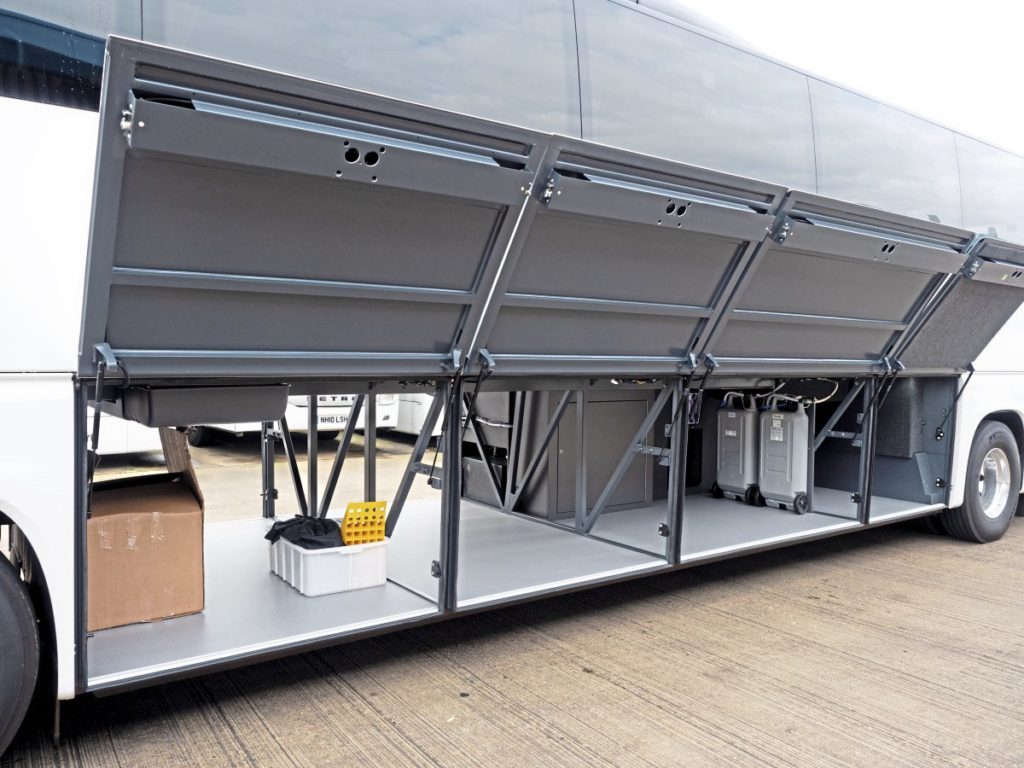 It’s a coach more or less devoid of anything too fancy. It keeps everything low key, and I have to say that in white, doesn’t deliver the drama this coach can have when painted with statement colours. The smooth shape has a classic elegance and, aside from some ‘eyebrows’ over the wheelarches and a full-length fluted edge to the lower waist panels, presents a flat canvas for signwriting and vinyls. 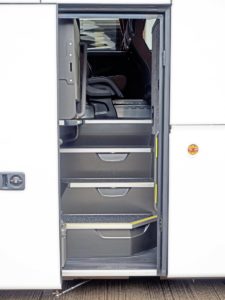 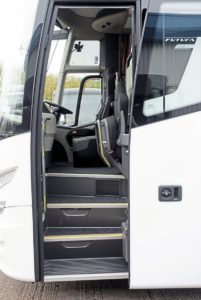 The front of the vehicle’s most dramatic features are the fancy lighting clusters with a silver-coloured plastic surround, and the large VDL logo above the front valance. The windscreen is strongly curved to improve its aerodynamic.

The window line is angular at the front, then level along all windows until the rear row of seats, where it angles upwards to the C pillar. There appears to be an impressive commonality of glass along the side, reducing the chances of glazing being unavailable.

At the rear, the coach becomes much more dramatic, with a recurved design from the engine cover to the window line, and more intricate lighting clusters. The cluster surround appears a little flimsy but this may be only an impression. A little unusually, the rear has no engine bay louvres, the cooling pack being vented on the nearside. The coach’s engine bay lip appears to cover the auxiliary belts to make them inaccessible, but a clever lower panel can be released to give technicians easy access to them.

When the locker doors are open, a cavernous luggage bay is revealed, fully 12.5m3 of room, which must be among the biggest in this sector.

Locker doors are manual, and closed firmly and securely.

If all that seems a little unremarkable, which is noteworthy is the finish, which was flawless, with narrow, even panel shutgaps and very high quality mouldings.

The door opens to a tidy passenger stairwell with five steps to the driver level and another to the flat floor of the coach. A handrail is provided on the left and, on the right, another is cunningly attached to the flipped-up courier seat. On the third step, VDL has built in a key-locked safe.

On the left of the dashboard is a capacious fridge opposite the courier. Equally cunningly, VDL has tucked the courier microphone into its own lidded box, out of the reach of unruly passengers. The courier has a peage window. 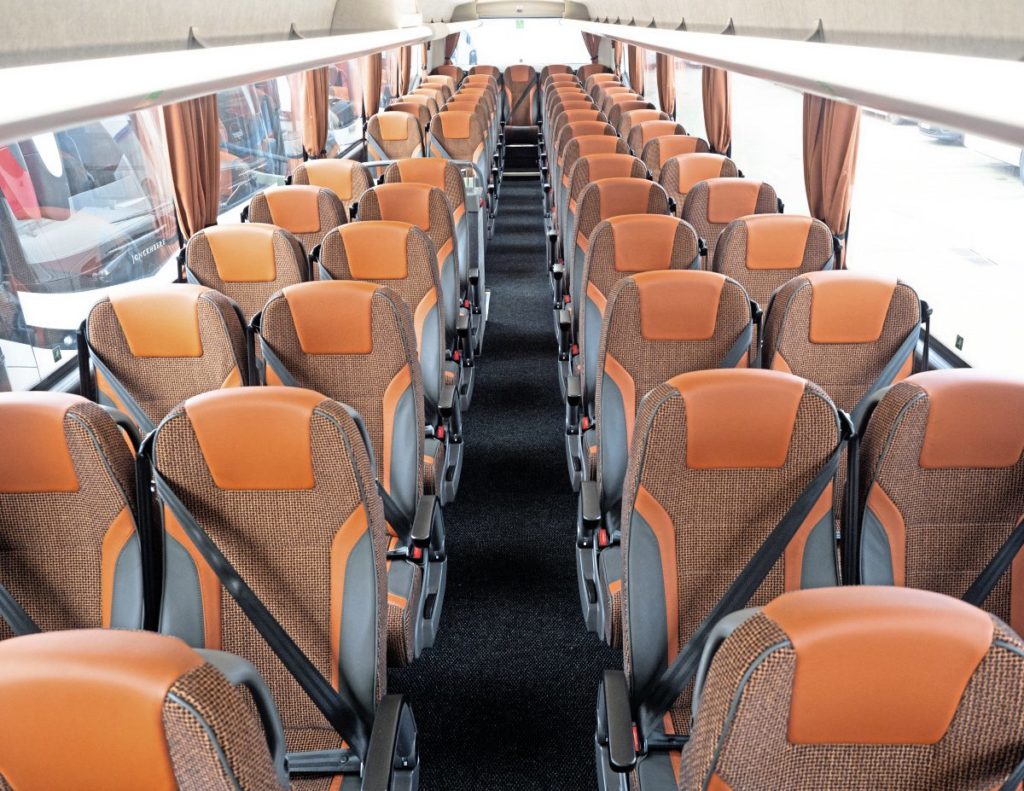 The driver cab is very nicely accomplished, with a lot of thought given to ergonomics. To his left, the driver has, mounted on a lockable box perfect for document or even brochure storage, one of no fewer than three cup holders (and a bottle holder). There is additional stowage to the right. There are two ‘accessory’ sockets. Keen-eyed readers will spot that this demonstrator has holes where a media system should be; this is to give the operator free choice, chiefly from the Bosch range with its SMART Line series the standard. Likewise, the front and centre video monitors are fitted in stock vehicles when specified. 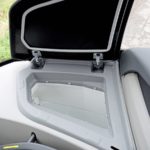 The switch clusters are very clearly marked, to the right being the climate controls and the gear selector plus an array of switches relating to the driver’s comfort, the switches to the left of the driver controlling the passenger saloon systems. The central LCD control screen is flanked by the tachometer and speedometer, both in good view through the steering wheel. The steering wheel itself has controls for hands-free phone, media and cruise control, while beneath it to the left are the indicators/wipers and to the right, the retarder control. 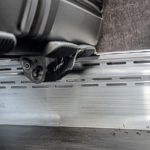 There are twin electric sun blinds, and the crew have two lockable lockers in the racking. We also loved the old-school fans for both the driver and courier.

In addition to the footbrake and accelerator, the driver has an exhaust brake to the left.

The passenger saloon is, again, workmanlike and unfussy without being dull. Good mood lighting in and under the luggage racks and very good personal service units installed see to that.

We were impressed with the seat pitch achieved in the coach, with few seats compromised for legroom. Seats are VDL Class 300 by Brusa and were very comfortable throughout our test drive. We noted that just four seat rows are slightly compromised by window pillars, virtually unavoidably, and at the back, the passenger at the end of the rear seat have a higher sill where the window line rises.

As mentioned, this coach is flat floor throughout. It has convector radiators running the length of the saloon, shielded by an aluminium shroud which leaves no hiding place for debris.

The luggage racks are sturdy, to say the least and (hooray!) have interior dividers along them, which should help passengers keep belongings over their own head, not have them roll to the passenger in front.

The centre toilet is accessed via a five-step stairwell which is adequately wide. The toilet itself is excellent, with ‘toilet occupied’ lights and hand drier.

Our test driver was instantly impressed with the view from the driver’s seat, which he said was thanks to the B pillar being located well behind his head.

“I think this is possibly the best driver view from any coach I have driven,” he said. The coach lacks the waist-level mirrors often supplied (although they can be fitted) but said after a very short time that the main mirrors did such a good job that this really didn’t matter. 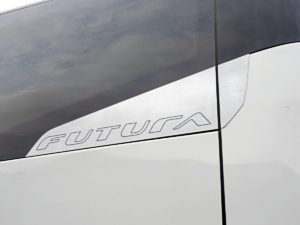 The coach has DAF Paccar’s new MX11 engine, with 410bhp, and the ZF TraXon automatic gearbox – a driveline we have tested before and have found exceptional. The MX11 has become a very quiet engine indeed, and the TraXon gearbox delivering gearchanges you cannot detect after the first two gears.

“This just doesn’t drive like a heavy coach,” he said. “I really like the throttle kick-down. At first, I thought it didn’t have kick-down, but actually it’s a dual-pressure throttle – you have to press hard on the pedal to find kick-down, so in my view, that will discourage drivers from using it habitually.”

The FHD2 135 felt brisk enough right up to the limiter, and sat at the limit while showing 1,100rpm. This has the promise of delivering good fuel economy.

In tight spots, it had a very useful turning circle despite the long wheelbase and the test driver said that the mirror view coupled with the reversing camera made yard manoeuvres very easy. 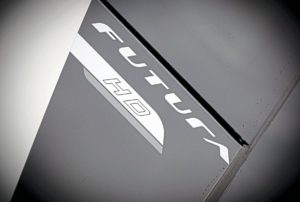 The ride was exceptional. There was no shudder at the front over potholes, and not even a hint of bounce or wallow. At all times, the coach handled the road surface impeccably.

A walk along the saloon at motorway speeds revealed impressively low noise levels, even opposite the centre door. At the rear, there was a slight evidence of a booming resonance but I put this down to the lack of passengers – road testing unladen is always a compromise and the lack of any passenger chatter amplifies even the smallest sounds.

This was a lovely travelling environment, and will be popular with drivers, we felt. It gave, in all reasonable measures, a perfect performance.

The VDL FHD2 135 is an exceptional coach, with our without virtue of 61 seats. We poked around its hidden corners and found evidence of an attention to detail.

Stainless steel framed and durable, the quality of its fixtures and fittings was excellent, and we have come to like the sophistication of the DAF/ZF driveline, particularly with the MX11. Being a TraXon ‘box, it has Predictive Powertrain Control, promising good economy, and with a 100,000km service interval, offers low TCO. On top of which, it’s hard to see how any driver could be disappointed with the performance and the creature comforts.

There is absolutely no problem with the travelling environment and any hirer will be very pleased with the ride and the legroom. But this coach fully laden with ‘standard’ passengers leaves just 740kg of additional payload, equating to around 12kg of luggage per person.

Now this may not necessarily be a problem as it depends entirely on your passenger group. We have mentioned the huge luggage hold, and this would be very useful for a travelling brass band or bulky sports equipment. But the payload may be a bigger consideration if you are carrying a tour group, and especially if they are overseas passengers, who tend to travel heavy.

For almost every other hire, the efficiency gains of having 61 seats filled make a very strong case for the FHD2 135.

Have your say, email: [email protected]