When it came time for the Bromsgrove based operator to refurnish some of its fleet, the company found the leather like material ideal for its needs. Looking to breathe some new life into one of the company’s well kept Neoplan Cityliners, Jon and Steve Harris of Harris Executive Travel could not decide what moquette to use on the seats. 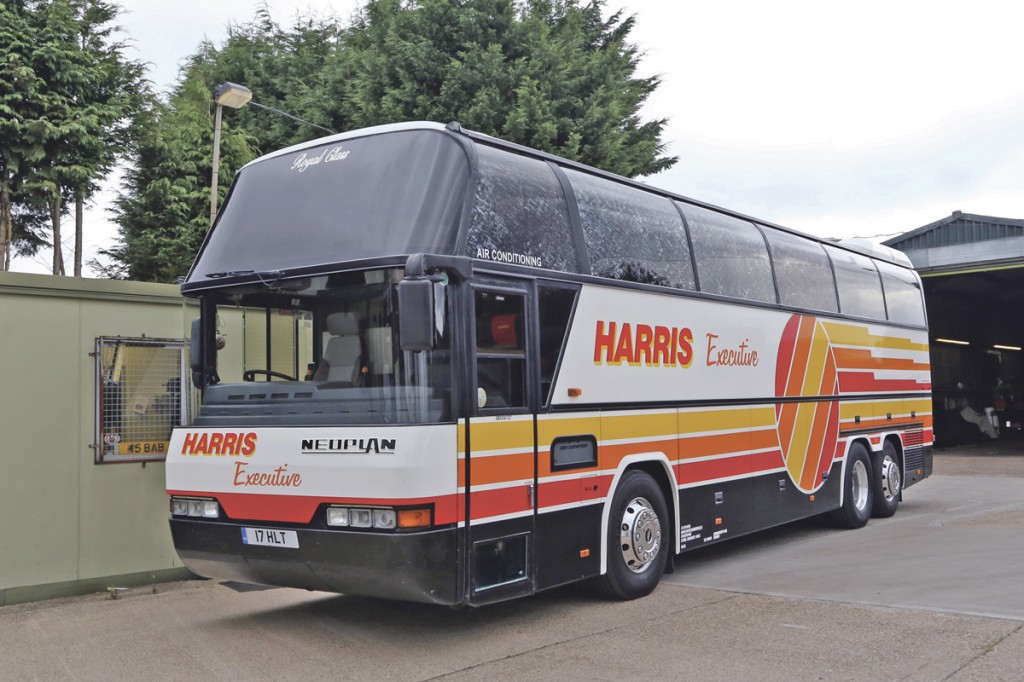 One of the Neoplan Cityliners. 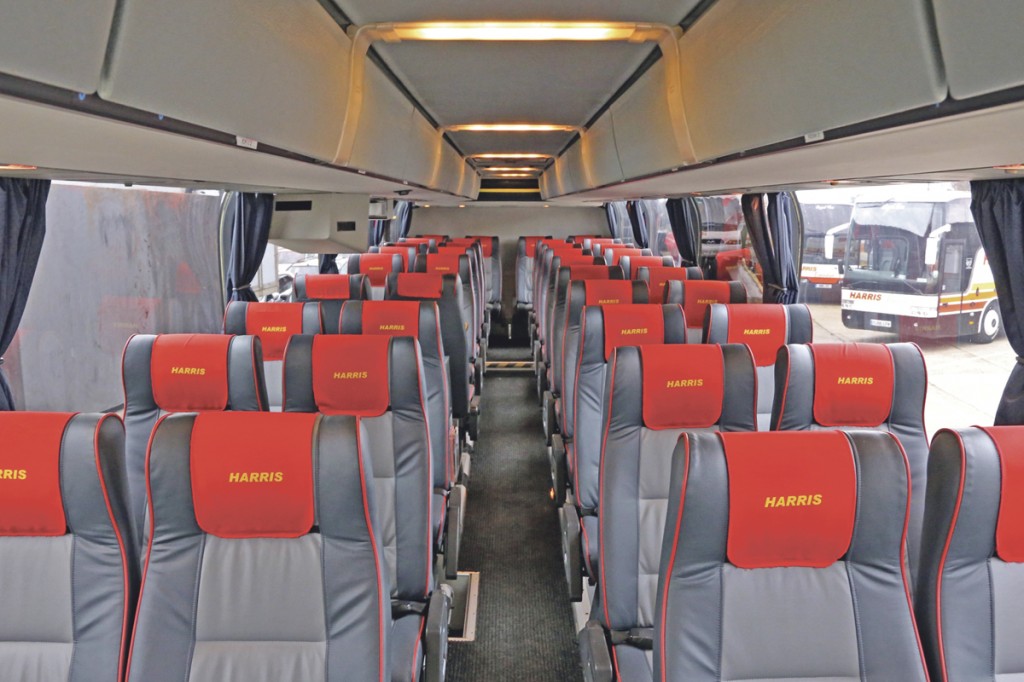 ‘Then E-Leather came along,’ Steve said. This leather like material, constructed from real leather, was a game changer for the operator, who had decided to commence the refurbishment programme with the material.

The work was very necessary, according to Steve, with the interior much due for a makeover. ‘We had been looking at moquettes for ages, every show, etc, for years. None took our fancy. When the Neoplan was bought from Parry’s International, it had windows tinted with solar film. This saved the seats from earlier renovation. Our Mark1 Cityliner also had solar film.’ 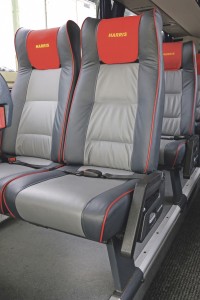 Two tone grey has been used on the seats, with red piping to match the branded headrest covers.

Unfortunately, over time children pulled this covering off. With the sun now freely able to beat down on the moquette, this led to the seats bleaching dramatically and looking out of place in the otherwise smart vehicle. Steve had the work done at Eastgate Coach Trimmers in Pickering, North Yorkshire. ‘Neil Fowler, Director of Eastgate has really gone to town with updating the vehicle,’ he said.

A comprehensive job has been done, not only have the seats been fully upholstered in E-Leather, attention has also been given to the soft trim on the luggage racks where Neil had to strip the base panels back to bare metal to ensure a very smooth finish. Two tone grey has been used on the seats, finished with red piping which matches the branded red
headrest covers used. The seats were completed with new magazine nets and the pull
down tables replaced. 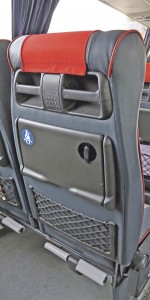 Magazine nets and tables have been replaced on the seats.

Citing the thorough job that Neil at Eastgate had carried out, Steve explained that he had previously gone to another upholsterer with a Neoplan and did not have a good experience.
He said the vehicle was returned with the screws and fittings for the seat accessories
simply tipped into a box for the operator to fit themselves. This was something he was
not pleased with.

Harris Executive Travel have since had a second vehicle re-trimmed in a similar manner. As part of a fleet upgrade around 18 months ago, the company acquired an 06 plate 14m DAF powered Van Hool T917 which had been new to Eavesway. The refurbishment programme brought the seats up to the same standard and E-Leather finish as the Neoplan. The same 42 seat capacity has been chosen, giving exceptional leg room. The change from the green Eavesway interior has been completed with red headrest inserts, red curtains and new red powder coating on all handrails. The latter process was undertaken by Alpha Powder Coating, Redditch. Steve said ‘I took them in for the powder coating at 11.00 in the morning and picked them up at 14.00 the same day.’

Commenting on using E-Leather, Neil said, ‘It looks good. It’s harder to work with because it doesn’t stretch as much as real leather but when it stretches, you can work it into the contours easier. With E-Leather, it takes a bit more time, that’s all. Also, because it is quite thin, E-Leather can be sewn up easier. I have no preference to which one I work with. They all have good points and, I wouldn’t say they have bad points, but one might outweigh the other in price, whilst the other outweighs in stretchiness for example.’

Neil is no stranger to working with E-Leather, saying he is doing a lot of refurbishment with the material of late. He works a lot with Pelican Engineering, upholstering Yutongs in the leather like material. When asked what draws people towards using E-Leather, he said, ‘I think people want that leather look, but want it less expensive than real leather. People like to think they are getting leather, albeit in a different form, at a cheaper price.’ 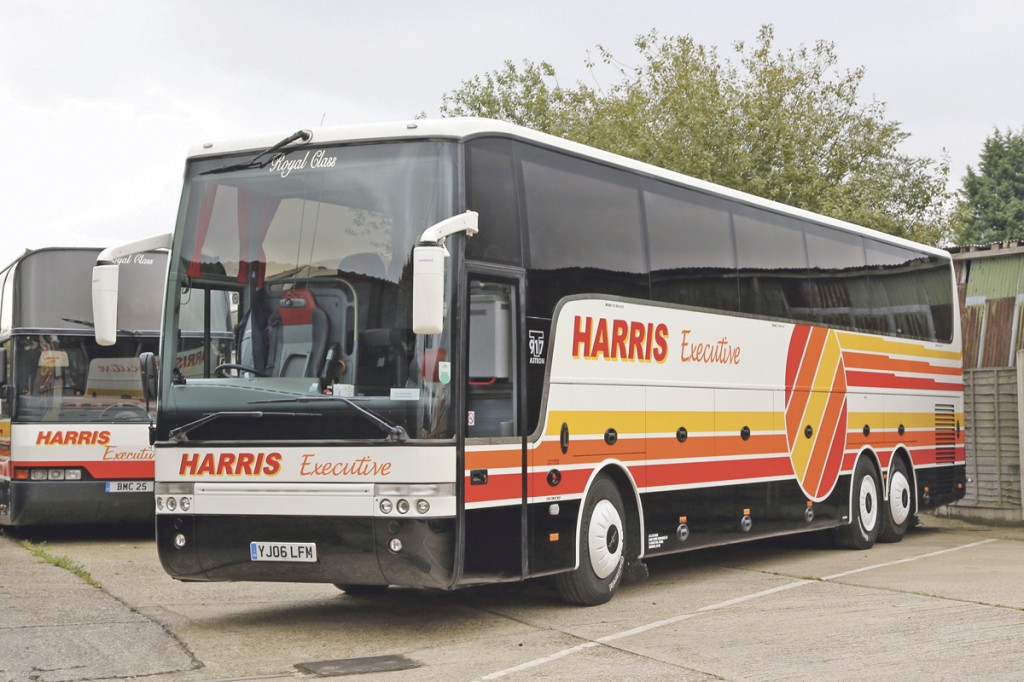 Harris has also had its Van Hool reupholstered in E-Leather. 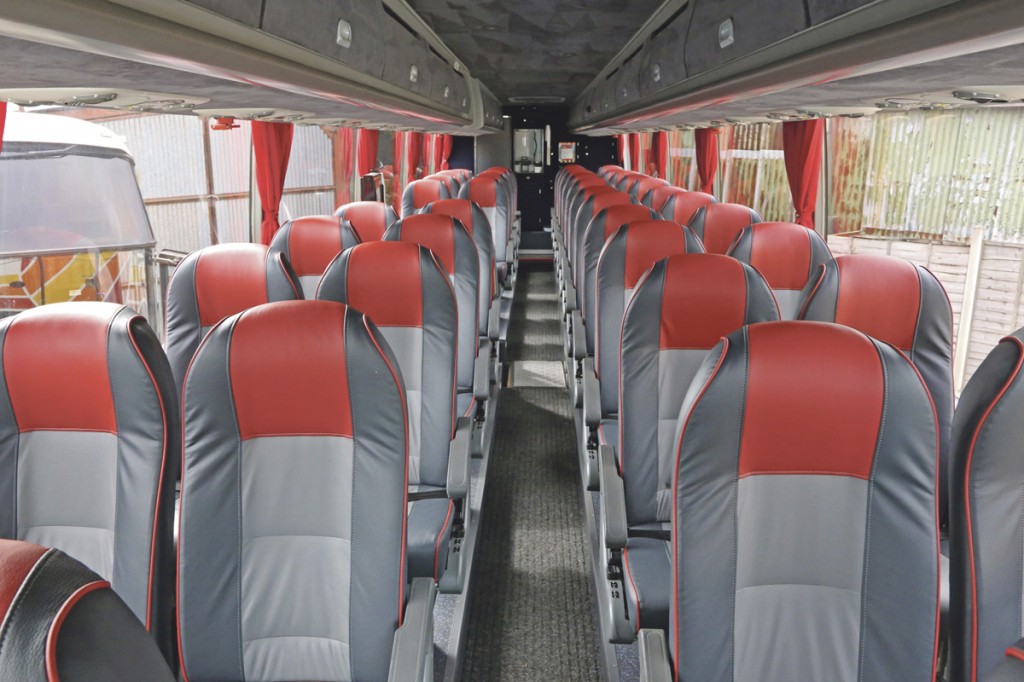 Inside the Van Hool.

He said E-Leather has grown so much that he does just as much in E-Leather as in real leather these days. The vehicles Eastgate tends to work on are corporate coaches, where the clients are willing to lavish more money on their vehicles. 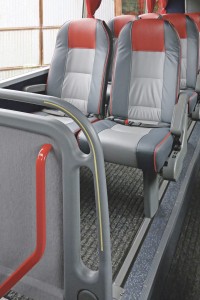 Alpha Powder Coating of Redditch carried out the red powder coating on the handrails of this Van Hool.

Carl Watkins of E-Leather said the product is proving popular, with Stagecoach, First Group and Arriva ‘pretty much fitting it as standard on new vehicles and refurbishments,’ with Go Ahead using it too. He also reports it is going down well with independent operators, with New Adventure Travel recently becoming a customer for it. He also noted Nottingham City Transport (NCT) has used it for five years.

What is behind this success, Carl claims, is that there is ‘no maintenance’ except for a quick wipe down’ and that it is ‘very durable’. ‘The beauty of it over leather is that as it’s an engineered product it doesn’t sag or become baggy. It doesn’t crack like leather does either.’

Asked whether he thinks the use of E-Leather is a fashion trend, Carl said, ‘I like to think we are here to stay. Stagecoach used us intermittently for the past six to seven years, but they have now gone over completely with us. Major operators are very happy with it.’

He acknowledges that it is a ‘fashionable industry’ and as such, the company is starting to come up with different things. For instance, with new Whole Vehicle Type Approval (WVTA) rules coming into effect, there is now a need for even higher fire resistance. E-Leather has developed a product that meets this requirement, the SL9 which it will launch at this year’s Euro Bus Expo.

The refurbished vehicles are used on Harris Executive Travel’s own tour work. Commenting on the work done on them, Steve said, ‘We are very happy with them. They look like new coaches. When you go on board, they even smell like different coaches, they smell new.’

It is not just Steve who is impressed with the E-Leather, he says a lot of the company’s regular passengers are commenting positively on the refreshed vehicles.