China’s leading manufacturer has revealed its UK plans, including a new premium coach coming down the production line which has all the hallmarks of a market-challenger. And it’s not all about price, we discover.

Fifteen years ago few people outside China had heard of the Yutong brand and hardly anyone in the UK recognised its potential.

Today, the company is among the biggest manufacturers of buses and coaches in the world producing a total of 67,268 units of all sizes in 2017, taking a 30% share of the Chinese market and an estimated 15% of the world market. It already claims a 15% share of the UK coach market based mainly on the success of the TC9 midicoach and has plans to grow this further with additional models that will not only expand its coach offering but take it into bus, utilising its growing expertise in what China refers to as ‘new energy’.

Last year’s production included 24,865 new energy vehicles, most of them electric buses employing its own technology, but it also has expertise in hybrid, gas and fuel cell technologies. Significantly, it is not only for bus use that these alternative fuel products are being developed; coach applications are also at the fore of its thinking, and the first UK electric coaches have already been ordered by Westway Coach Services.

Yutong was not the first Chinese manufacturer to tackle the UK market but I believe the key reason it has succeeded where others have done less well is in the choice of its importer; Pelican Bus & Coach based in Castleford. To some, Pelican was a surprising choice because five years ago it was not an established coach industry player, though if you spoke to truck operators in Yorkshire and beyond you were likely to obtain an extremely positive reference for the standard of back-up they provided for the trucks they sold. 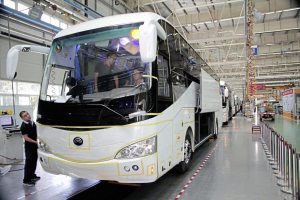 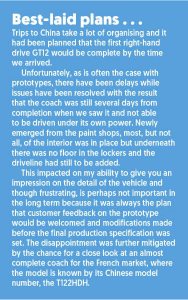 A solid, family owned and run business with over 90 years of trading behind it, Pelican has applied the same commitment to all aspects of keeping its coach customers satisfied that truck operators had come to expect.

Bus & Coach Buyer joined a small group of operators visiting Yutong’s two plants in the city of Zhengzhou (China’s 15th largest) and see for ourselves how things have progressed since his previous visits in 2005 and 2010. Led by Coach Sales Manager, Bob Elliott, accompanied by veteran coach salesman, Phil Hodgson, and the Head of Pelican’s China Office, Clelia Jin, the aim was not only to show the party the facilities in which the products are built, but also to provide an initial look at the new GT12 coach as well as whetting appetites for other forthcoming Yutong possibilities. 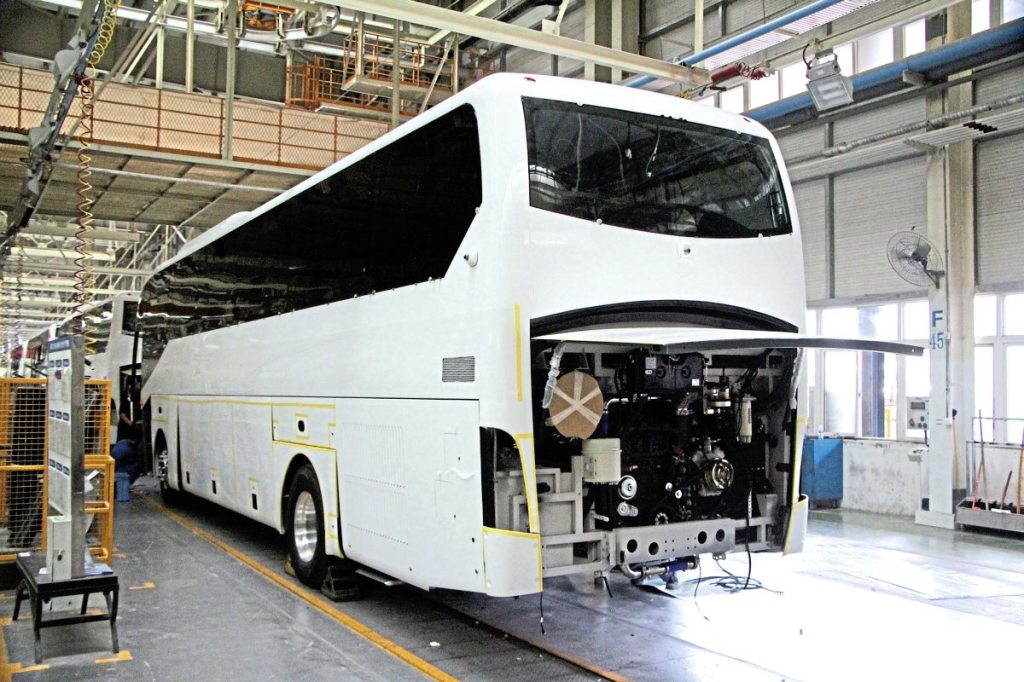 The rear of a TC12 on the line

It is a ‘world’ design, in that the basic structure and look is designed to appeal to global markets, albeit with the needs of different countries specifically taken into account. To this end, we understand that over 30 prototypes have been built for different territories.

Finished or not, it was clear at a glance that the GT12’s styling is a lot more European than that of the TC12 and I don’t think anyone will disagree that it is elegant and well proportioned. It is subtler with hints of Setra (particularly in the grilles and the side brightwork) and yet still dynamic and not dull. In the nicest possible way, it is not obviously Chinese. This is as true at the rear as it is in the front three-quarter aspects. If the exterior upgrade of the TC12 at Euro VI was an improvement, this is a sea change.

The GT12 coach will be positioned in the UK Yutong range above the existing TC12 coach which will continue in production and will not be offered with the additional features such as the more powerful engine unit. 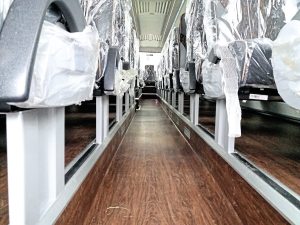 Inside, the saloon has a sunken centre gangway and the addition of new racks sourced from Ellamp in Italy. These have LED strips set in the edge and unusual but easily operated two-tone passenger service units on the underside. The ceiling is kept simple with easy-clean contoured panels running the full length with diffused lighting (incorporating multi-coloured mood lights) to the edges. There are two Bosch folding LCD monitors, one at the front in the centre and one over the aisle near the centre door, and these come down automatically when you turn on the ignition; it took us a while to work that out.

At the entrance there are four wood-effect vinyl covered steps from the ground to a platform alongside the driver. On the left is a three-point belted courier seat trimmed to match the driver’s seat which, when deployed, provides good foot room for its occupant by means of a cutaway section beneath the dash with integral fridge.

A curved handrail attached to the dash runs up the left of the stairway and on the right there is a handhold in the base of the courier seat and further rails incorporated within the door mechanism. From the platform there is a further step up to the sunken aisle. LED lighting is provided in both the step areas and aisle (as well as in the engine bay and luggage hold).

At the centre door there are five steps from ground to aisle and handrail provision is good on both sides. The toilet compartment itself is moulded and easy to clean with good headroom. 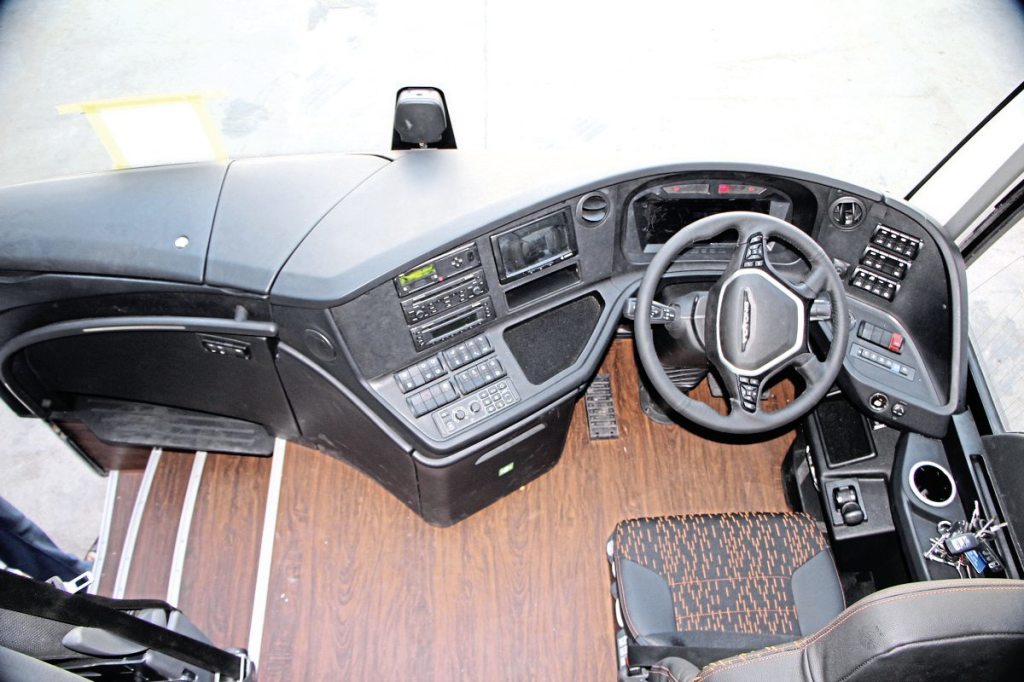 The cab, dash and entrance area

For the driver, there is an air suspended seat, quite a bit of storage space including a coin tray and a recess for a clipboard, and an electrically powered, heated, driver’s side window. Tyre pressure monitoring (TPMS) is standard.

The dash looks ergonomically laid out, a distinctive feature of it being a virtual display of key functions that seemed to be popular with the operators in the group.

It all appears when you turn on the system. The digital system is supplied by Continental (B&CB, 27 July issue). One criticism James Davie, of Rye-based Nova Bussing, made was of the button to activate the steering wheel adjustment. He didn’t feel its position, within a cluster of switches, was sufficiently intuitive for drivers. 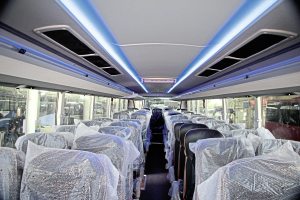 Seats are manufactured in-house by Yutong and look good and feel comfortable, the only proviso being that if 53 are fitted, those on the offside are really rather tightly spaced, though legal. Those on the nearside were marginally wider spaced. When we saw them they were capable of reclining too far for the comfort of the person to the rear, though I understand that they will not do so in future. Trimmed in black fabric with an orange pattern to the centres with leather side panels and tan headrest inserts the seats looked the part.

Full leather seats are an option though Bob Elliott was not sure whether pouches could replace the nets fitted. The backs were two-tone grey plastic. There was some criticism of the styling of the armrests and I believe this will be addressed, possibly with the use of carbon fibre type inserts on arms similar to those in the French coach. No foot rests are fitted.

There were USB points to every seatback, located roughly at the base of the headrest, perhaps the best place they can be to avoid scrabbling under or between seats or reaching across the passenger sat adjacent to you. As well as the USBs, three-point plugs are mounted intermittently along the sidewalls. The ones we saw were plastic and looked a bit cheap but they are to be replaced with stainless steel units.

I always check out the rear corner seats for comfort and though they were marginally less comfortable for me because of a little intrusion from the side mouldings, they were better than many I have encountered and someone of a slighter build probably wouldn’t notice it.

Plastics appeared to be of a good quality and the decency screens were particularly neat, indeed David West went to enquire whether the same units could be retrofitted in his TC9s. I didn’t hear the outcome of that one. Those at the front had hinged tables attached and these will not be fitted on stock vehicles. 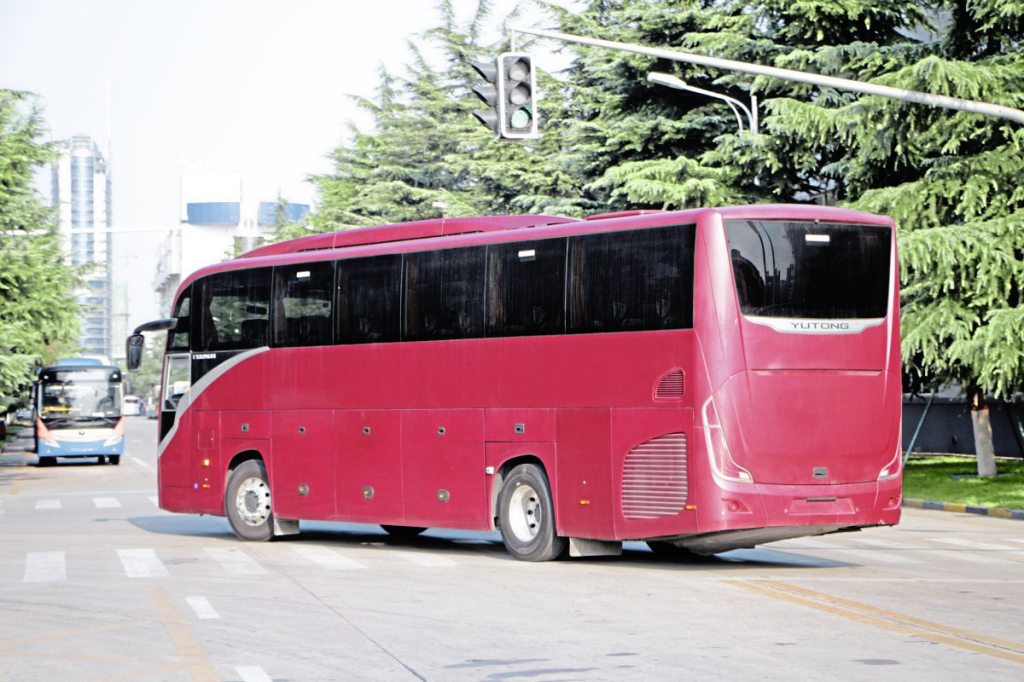 Beyond the steering wheel location, there is a surprising amount of difference between the French and British vehicles, reflecting divergent market tastes. Obvious examples were different seats, a two part folding toilet door and different centre step arrangement. Weight constraints also mean that the over-axle luggage locker on the French coach does not appear on the British one.

Although operators spoke highly of the simple systems in their TC9s, the GT12 has a Spheros system as standard in both the UK and France complete with rack blowers. 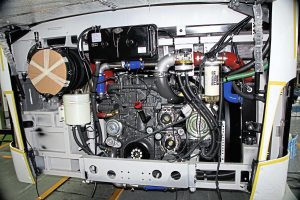 Mechanically, the driveline offered is significantly upgraded as it now has the Paccar DAF MX11-330 engine developing 450bhp/330kW and peak torque of 2,300Nm, rather than the 400bhp version of the same 10.8-litre unit installed in the TC12. Similarly, the transmission is also a step up, with the latest ZF EcoLife Coach unit, capable of taking input torques up to 2,300Nm, installed instead of the standard EcoLife.

The suspension and axles are all European built ZF. Other key elements of the specification are ECAS suspension with kneeling, Alcoa Durabrite wheels, Wabco AEBS, LDWS and ESC and a front tow hook with provision for one at the rear.

In price terms it will cost more than the TC12, but not outrageously so and I anticipate that both will be attractive in this respect.

The GT12 retailing at from £225,000 based on current exchange rates

Orders have already been taken for GT12s although most of these cannot yet be revealed. James Davie confirmed to me that he will be taking one. Nova Bussing already operate a 67-plate TC9 as a 26-seater with tables and toilet and will be taking the new coach as a 53-seater with toilet, though this too will be downseated for their needs.

Something else James mentioned was the full tool kit that comes with every vehicle, including the GT12, something he has not experienced with others. As well as the tool kit, each coach also comes with tow hook eyes, a proper bottle jack, an oil filler, some service parts and a cleaner kit. On top of this, the first service is free and Pelican come to you to carry it out. They have a good record on parts and, as Bob explained, parts stocks for the GT12 are already on the way to the UK, despite the fact that stock vehicles will not be available until May. 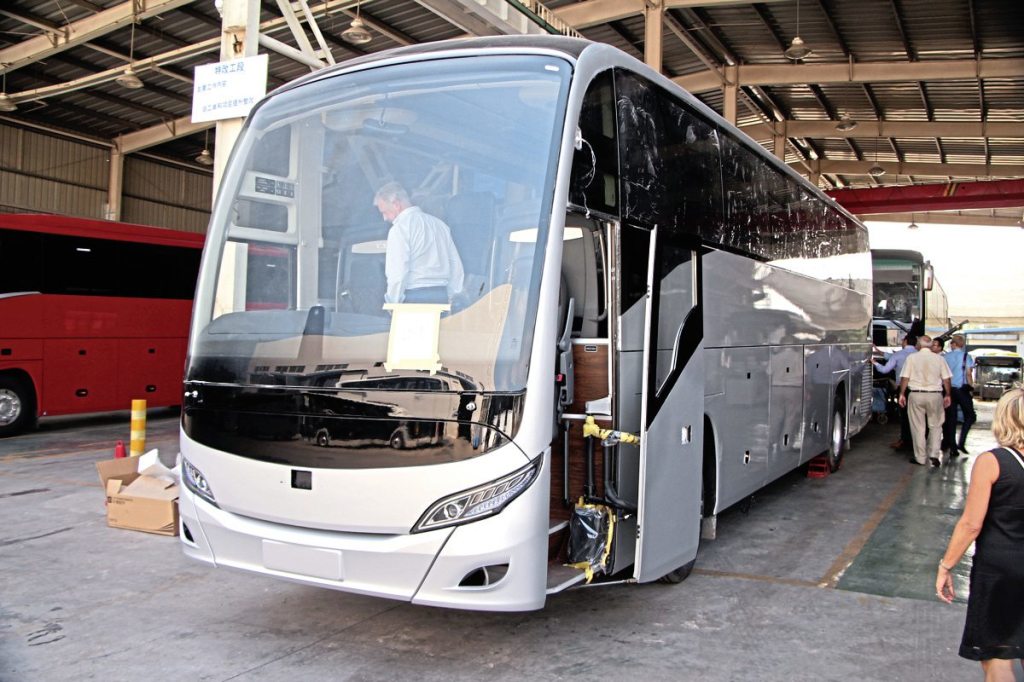 More visually refined than the TC12, the GT12 is elegant without being outrageous

The two companies have a rolling three-year contract and the factory admits Pelican has sold more than was expected.

Bob told me there are now approaching 400 Yutongs on the road in the UK and the hope is that the current position of market leadership in the midicoach sector can be built upon: “All the groundwork has been done over the past four years in preparation for the GT12 coming,” he said. “Yutong has backed us to the hilt.”

Pelican will have a strong presence at Euro Bus Expo in Birmingham at the end of October, with four Yutong vehicles on display. The GT12 we saw, which will by then be complete, will star, along with two examples of the TC9 and an E10 electric city bus. With the enhanced appeal of its more European external and internal appearance the GT12 should help the brand increase its presence in the full sized coach sector. 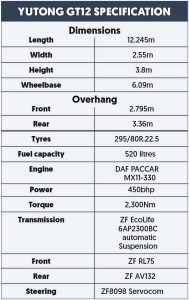