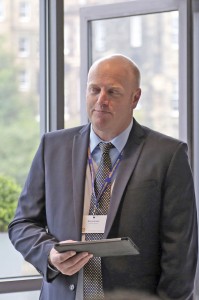 Tourism is a major business for Edinburgh with around 4m visitors every year pumping over £3.2bn into the city’s economy. That the bus and coach industry is a significant contributor to this was made clear when Lothian Buses MD, Richard Hall, welcomed guests to the recent launch of Edinburgh Bus Tours new £6.5m vehicle fleet in the city’s Grassmarket with the famous castle towering above in the mist. 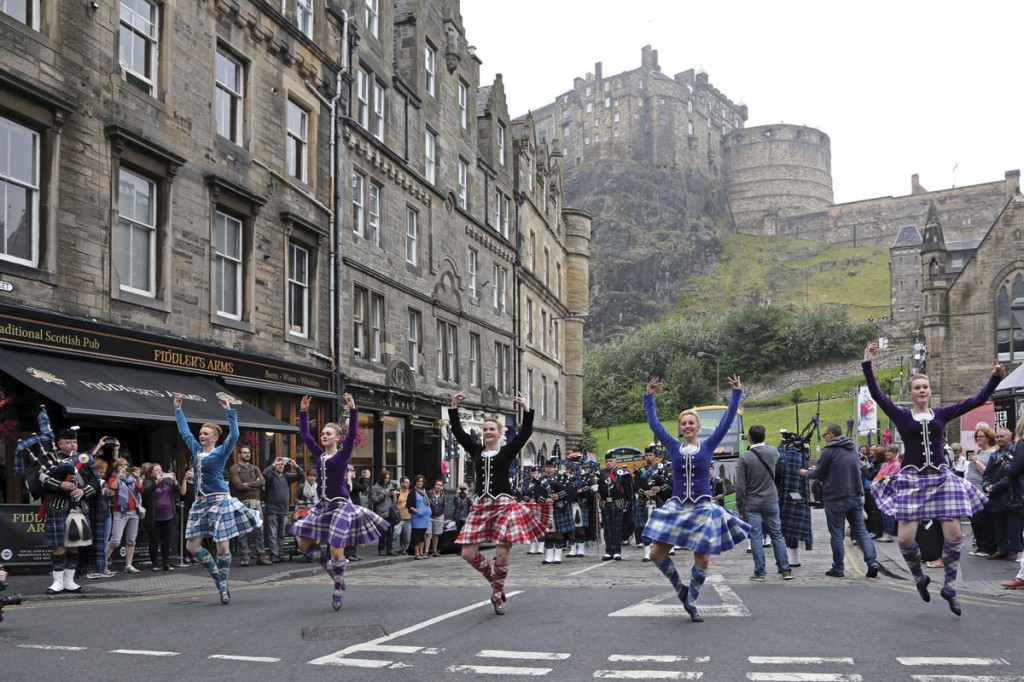 Before the vehicles’ arrival, Richard introduced the Lothian Buses business and its subsidiaries, saying of the tours operation that, ‘some consider it the more colourful but maybe the frivolous part of the business but in reality it is hugely successful, it is award winning and it is a commercial operation which employs a team of over 160 people. A key driver for visitors to Edinburgh is to enjoy the city’s heritage and the culture and our five star Visit Scotland accredited tours play a large part in that. Over half a million visitors every year use our tours, they offer a unique perspective on this unique city. It is only fitting then that we should provide unique customised vehicles to provide that unique experience’

Referring to the 30 new vehicles about to be unveiled, Richard said, ‘We pride ourselves on operating one of the most modern and cleanest fleets in the UK. By developing a close working partnership with Wrightbus and Volvo these new vehicles have been designed and built to our exacting specifications to ensure that we continue to exceed the expectations of our tour passengers.’ The new vehicles also support Lothian Buses’ fleet strategy of a 42% cut in its carbon footprint by 2020, reducing CO2 emissions by 40% compared to the existing tour vehicles and cutting both NOx and particulates by 95-99%. This will deliver a significant impact to the air quality locally in central Edinburgh where sightseeing buses form a significant proportion of the traffic in a number of narrow building lined streets.

Richard invited guests to join him on the west side of Grassmarket ready to ‘sit back and relax as we take you on an amazing journey.’ Soon the sound of pipes and drums heralded the arrival of the band from the Royal Edinburgh Military Tattoo followed by three of the new buses showcasing the colours of the three tours on which the fleet will be used (The Edinburgh Tour – green, The Majestic Tour – blue and City Sightseeing – red). With it being festival season in Edinburgh, the message that there was entertainment in the Grassmarket soon spread amongst tourists and the area quickly filled with people enjoying the band and accompanying dancers. The local police were very supportive in holding back traffic during the short performance and subsequent parallel drive of the buses along the south of the square.

Guests then joined their allocated vehicle for a short demonstration tour, fortunately the weather remained dry if somewhat grey and there were seats in the open air for all those keen on sampling the fresh air experience. 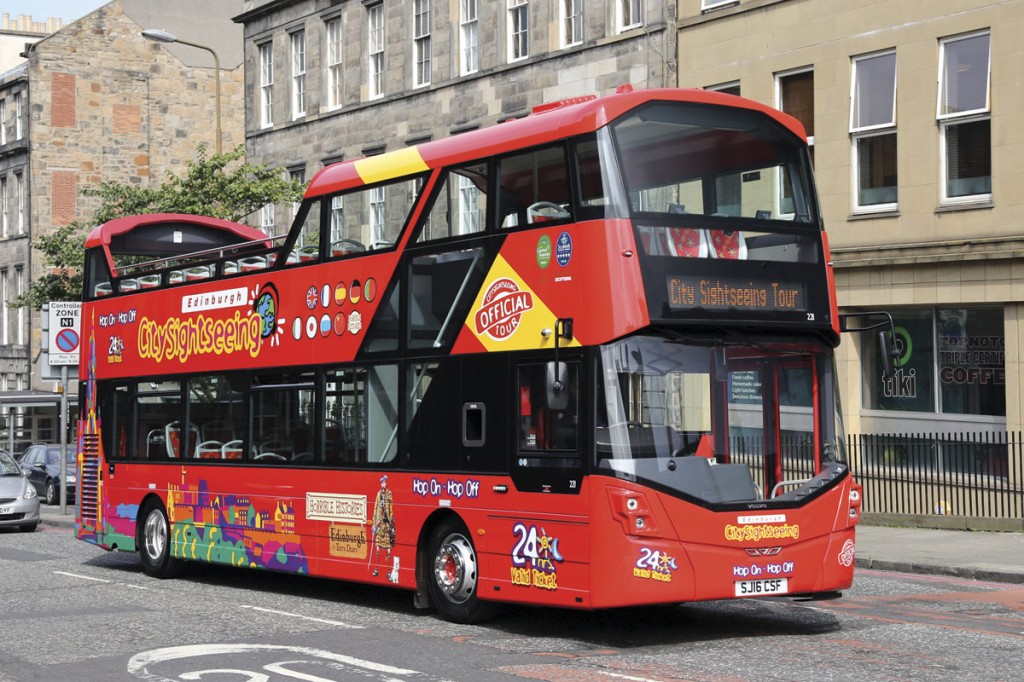 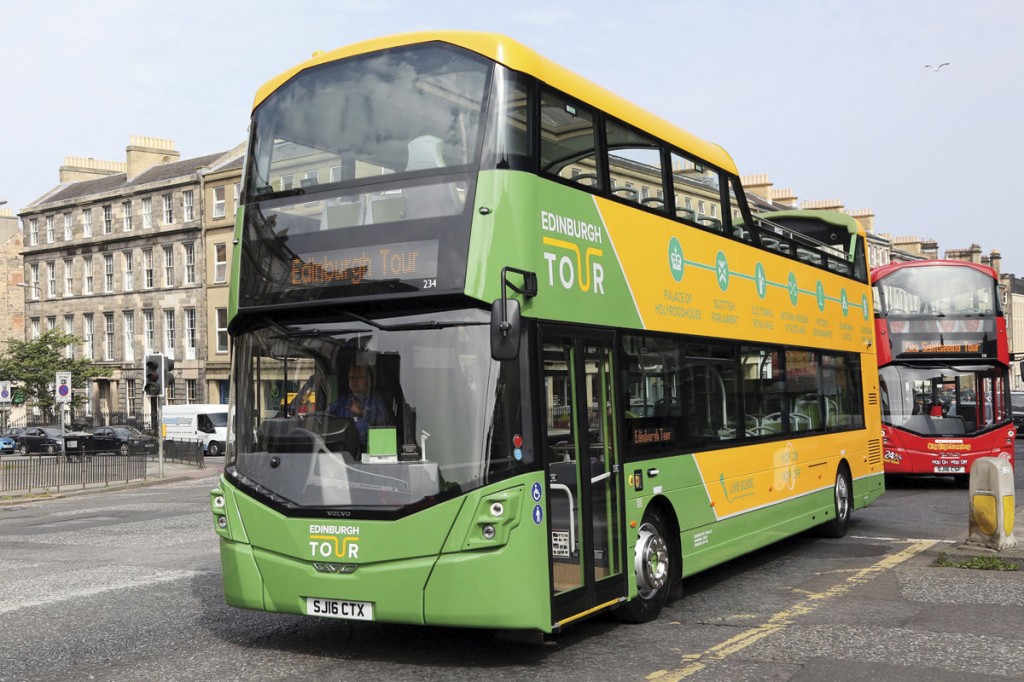 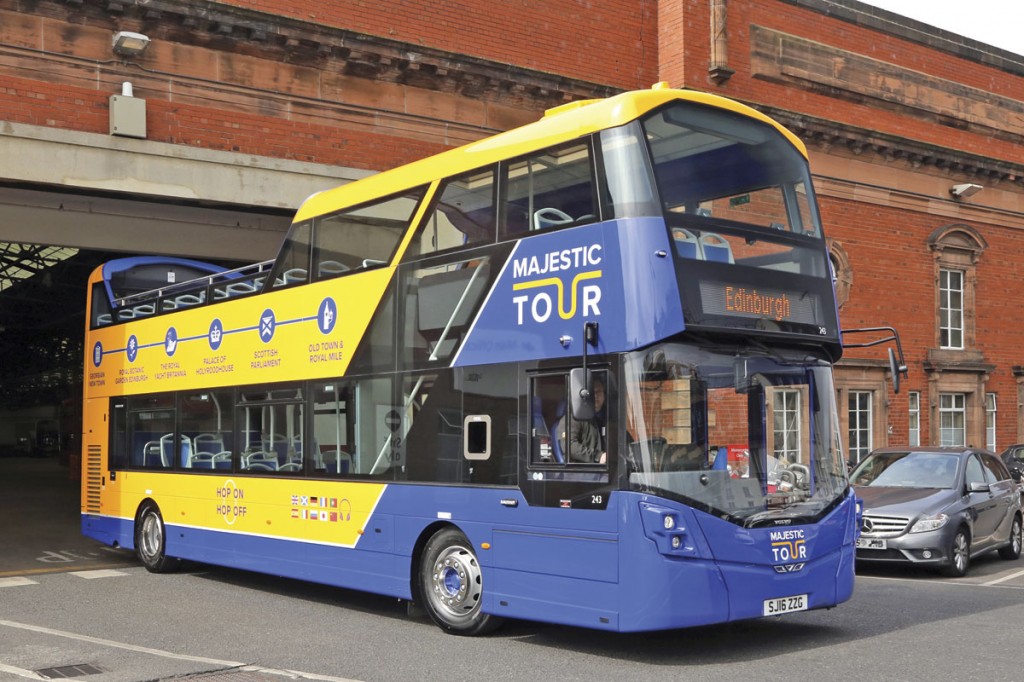 The waterproof Fainsa Metropolis seats from Compin have coloured E-Leather inserts appropriate to the vehicle’s tour branding. This is the City Sightseeing version 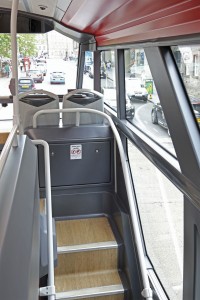 Richard Hall referred to the close co-operation between Wrightbus and Volvo with his team in the development of the vehicles adding, ‘every element of these vehicles has been overseen by our own in house engineering team led by Engineering Director Bill Devlin. The whole concept is about putting the customer right at the very heart of the design with increased visibility on both decks and improved accessibility. These vehicles offer a greatly increased customer experience.’

For Wrightbus, Sam McLaren, Commercial Director, said: ‘We have worked closely with Lothian Buses on this stunning new open top addition to our product range. This has involved a redesign of our latest double deck body style with particular attention paid to achieving a panoramic view at the front of the bus by incorporating a review of the glazing system.  At the same time we have ensured commonality in line with our other products to allow for easy maintenance and the replacement of parts where necessary. In addition, a specially designed drainage system has been integrated into the bus to ensure continued operation in all weather conditions. This drainage system was jointly designed by the team in Ballymena and the engineering team at Lothian Buses. We now look forward to seeing these fantastic new vehicles operating successfully in Scotland’s capital city.’

Phil Owen, Commercial Sales Director for Volvo Bus, added ‘These buses are equipped with the latest generation of Volvo’s electronically controlled braking system which features a number of important safety and comfort-enhancing functions. These include brake blending, hill start aid and emergency braking assistance, which are all vital for passenger comfort and safety on these very busy routes around Edinburgh’ 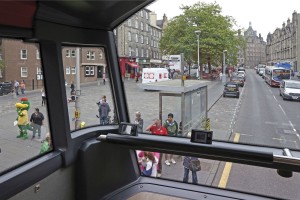 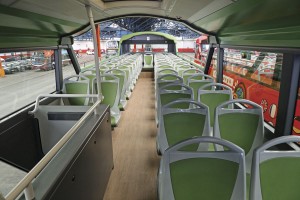 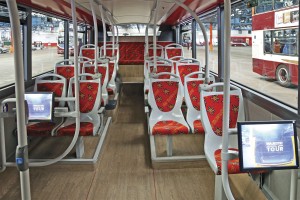 Wrightbus have re-engineered the Gemini 3 body structure to meet Lothian Buses’ requirements. The principle challenges were the design of the ends of the open section to support structural integrity and the provision of top deck drainage. The former was achieved by the incorporation of two structural hoops angled to match the existing staircase line of the Gemini 3 body. These intrude slightly into the upper deck headroom and are padded on the inside for the benefit of the tallest passengers.

The drainage requirement has been met by channels running the length of the vehicle on either side which are covered with a metal grating that sits harmoniously alongside the wood effect floor covering. Four down pipes within the body pillars take the rainwater for release at road level.

Alongside these engineering challenges, the exterior appearance has been subtly changed with the incorporation of glazing into the wide A pillars together with an additional glazed panel below the front upper deck windscreen as limited (amber coloured LED) destination display equipment is required on the vehicles. The staircase is fully glazed and there are glazed roof panels in the covered upper deck area, both items sharing commonality with the most recent deliveries of closed top buses to Lothian Buses.

The single door vehicles have a potential total capacity of 89 including standees with two dedicated wheelchair spaces. Seating is individual moulded weatherproof Fainsa Metropolis units from Compin with E-Leather inserts matched to the vehicle’s external colour scheme. The seatbacks are fitted with a headphone connection and screen for the oblecto (from the Latin for ‘to entertain or amuse’) multi lingual touch screen commentary system from v6e. The 11.5m length normally allows for 53 seats with underseat lighting on the upper deck, 16 of them fully within the roofed area. In the case of the green vehicles for the Edinburgh Tour, the front nearside seat pair is replaced by a single rearward facing high specification seat for the tour guide. The lower deck has 17 individual seats, all but the first five on podests plus a fully trimmed seat for five across the rear with the emergency exit in front of it on the offside.

A full CCTV system is installed including a forward facing camera mounted on the front upper deck screen handrail which feeds live footage to screens on the lower deck including dedicated screens for each wheelchair position. 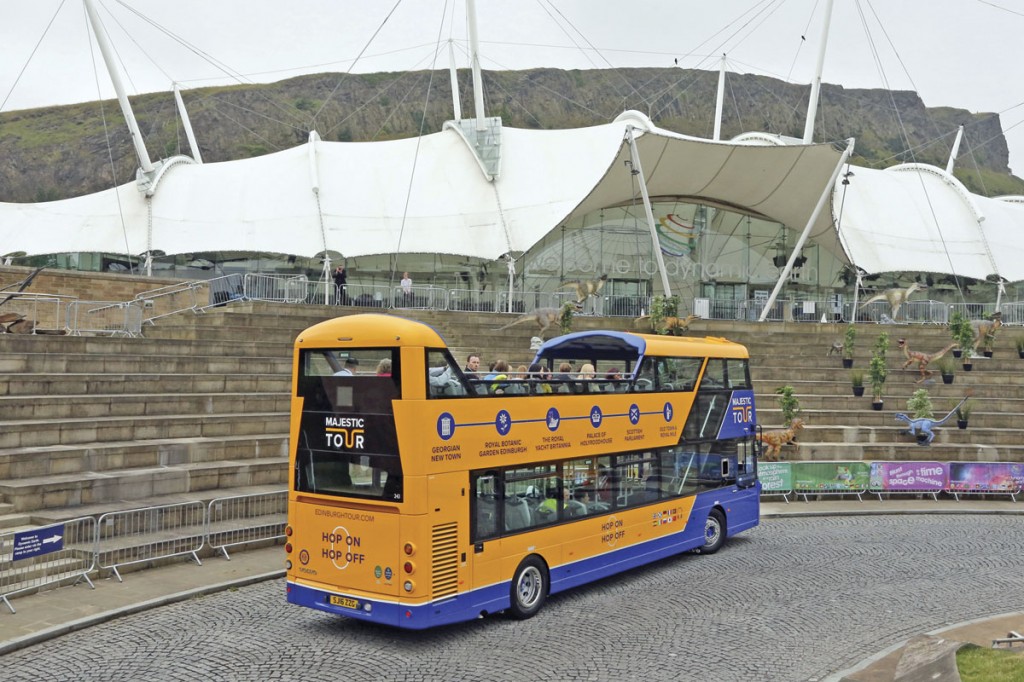 The Edinburgh Bus Tours operation of Lothian Buses will use the new vehicles to upgrade the three of the five tours in its portfolio that operate on a year round hop on-hop off basis with summer departure frequencies up to every ten minutes.

The Edinburgh Tour covering the old and new towns with a live commentary in English will receive the green vehicles with upper deck seat for the tour guide. The red vehicles are for the City Sightseeing tour which covers a similar area on a different routing. This offers a pre-recorded commentary in nine languages plus an alternative ‘horrible histories’ commentary popular with younger participants. The Majestic Tour with the blue vehicles and pre-recorded commentary covers a wider area to take in the popular Botanic Gardens, Royal Yacht Britannia and Leith destinations.

The other two tours in Edinburgh Bus Tours’ portfolio operate on a summer seasonal basis up to October. The MacTours route takes in parts of the old and new towns with a live commentary in English given on the upgraded and extended vintage Routemaster buses that first entered service in London over 50 years ago. The Bus and Boat Tour with covered top vehicles takes the visitor through the new town to Queensferry for a boat cruise around the bridges and Inchcolm Island. 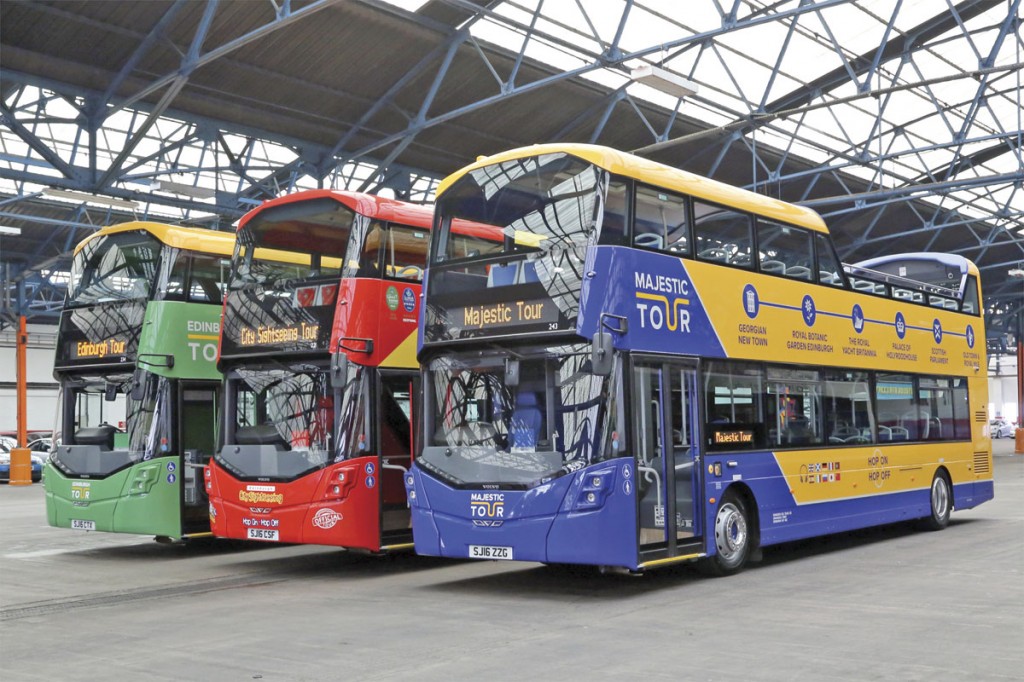 The tours are the third most popular paid for tourist attraction in Scotland (after Edinburgh Castle and Edinburgh Zoo) and contribute significantly to the economy of the city resulting in their recognition with an ‘exceptional’ five star award from the Scottish Tourist Board. Working in support of Lothian Buses’ environmental policy and serving attractions en route with noted green credentials has also resulted in the company receiving a Green Tourism gold award, a position which will be further strengthened by the introduction of the new low emission vehicles.

As part of the new vehicle launch, participants were able to experience the new vehicles with live commentary over an abbreviated Edinburgh Tour route. Designed to cope with vagueness of the Edinburgh weather, the seating was firm but suitably comfortable and the ride smooth given the less than perfect condition of some of the city’s roads. The guide was very knowledgeable, interspacing the traditional historical and often gruesome facts with more up to date material covering a wide range of interests and practical tips like being wary of the pigeons should a train pass over the bridge near Holyrood House.

Richard expects the new vehicles to have a significant impact on the city, ‘With our open-top buses a prominent sight on Edinburgh’s streets, we feel the new vehicles are not only a great addition to our fleet but also to the capital city of Scotland. At the same time as offering sightseers an even better view of the city, we’ll be reducing our environmental impact through lower emissions.’

The first vehicles are expected to enter service in September with the full fleet available for the 2017 summer season. One of them is expected to appear at Euro Bus Expo in November, on the Volvo Bus stand carrying a distinctive special livery.

The development work undertaken by Wrightbus in conjunction with Lothian Buses and Volvo Bus will flow through into the company’s wider portfolio. The open top body will initially be offered generally at 11.5m on Volvo chassis and could be available at the same length using the in house Streetdeck chassis. Alternative lengths are not currently planned unless a significant order justified the structural design work involved.

A popular choice is likely to be the glazed A pillar which will be offered on both Gemini 3DL and Streetdeck bodies. The first covered top vehicle order to encompass this enhancement has already been placed by Lothian Buses for Volvo B5TLs due in 2017.