Bridgestone has secured one of its most significant bus and coach contracts in recent years, courtesy of a new fleet agreement with Falcon Coaches.

Based in Byfleet, Falcon Coaches operates 55 buses and coaches in Surrey, Middlesex and south-east London, with services ranging from home to school travel to private hire and tourist operations. The fleet has expanded rapidly in recent years and the company decided to move to a pay-as-you-go tyre policy initially.

“We entered into dialogue with a number of tyre manufacturers but it soon became clear to us that Bridgestone would be the ideal company to partner with” – Falcon Coaches’ Managing Director, Richard Telling

Falcon Coaches’ Managing Director, Richard Telling, said: “One of our big priorities for the year was to embark on a tyre programme with a premium manufacturer who understands our bespoke needs and requirements. For some time, we were replacing tyres as we’d go, featuring different brands on different axles, and I wanted to create a sense of uniformity with a brand that we could trust.

“We entered into dialogue with a number of tyre manufacturers but it soon became clear to us that Bridgestone would be the ideal company to partner with. Their attention to detail has been second-to-none and their products have impressed us greatly.” 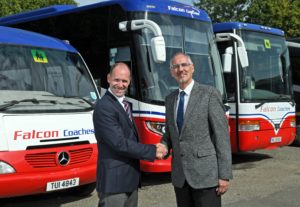 Falcon Coaches will benefit from the Duravis and U-AP 002 which has been developed with their urban bus and coach operations in mind, featuring reinforced sidewalls and fuel economy technology.

The U-AP 002 has been specifically designed for the requirements of electric and hybrid bus fleets and meets the 3PMSF standard for winter driving. Outputting just 69dB, the U-AP002 reduces noise pollution by 2dB compared with a previous iteration and a higher load capacity also features to combat added battery weight when used on electric vehicles – suitable for up to eight tons in steer axle.

In addition, the Bridgestone Partner network was highlighted as a significant asset, along with the FleetBridge reporting system, which offers full transparency on the condition of every tyre fitted to every vehicle.

Richard added: “We are already seeing that our fuel economy levels have improved since fitting all of our vehicles on Bridgestone, while the tyres also appear to be showing much less signs of wear.

“So we are already seeing the benefits of Bridgestone’s premium tyres, which complement our daily operations perfectly. The level of reporting and transparency is huge, too. We benefit from a monthly fleet inspection, which frees up time for our drivers who would otherwise be carrying out these checks themselves. There have been a number of positive facets to the fleet partnership and we are very happy.”