Dai Powell is rolling out the social enterprise operating model of HCT Group throughout the country.

HCT Group is spreading the social enterprise model in the bus and coach sector. It has made its first ever acquisitions of commercial operations this year and is converting them to its own social enterprise business model. It has also runs a successful programme to get ex-offenders into bus driving. 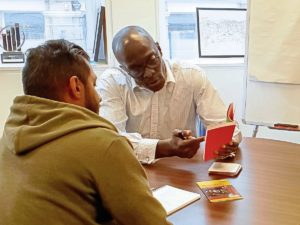 Despite this success, the company still faces challenges. Like operations up and down the country, it feels the strain of the driver shortage. Speaking to HCT’s Chairman, Dai Powell, his tone is very down to earth as he describes the situation: “We are fairly short of drivers and that situation might get worse in the months to come,” he said, referring to the impending Brexit.

One of the ways his operation is trying to overcome this is through its Drive On programme. This sees the operation partner with Blue Sky, another social enterprise, to help ex-offenders become part of the bus industry. Blue Sky recruits and selects the participants, ensuring that they are appropriate for the role. The HCT Group Learning Centre then provides the theory and practical elements of bus driver training. Dai said: “We think it’s the right thing to do. They have paid their dues to society. They have been excellent employees. It’s a good job for someone that wants to better themselves.”

This is the first time HCT has rolled an initiative like this out, so what has the organisation learnt from the programme? “We’ve learnt that you have to have the initial support for something like this. Working with partners is important. It’s been hugely positive.”

Getting the right drivers and enough of them is a concern for Dai: “I have the feeling that post-Brexit things might get a little tight. But that’s not just in our industry. We still train the long-term unemployed to drive, but unemployment is very low at the moment.”

When it comes to selecting drivers, what does the HCT Group look for? “Customer service, we start with that.”

A number of drivers have joined HCT Group in the past few months as it acquired Impact Group of Perivale, London and Rotherham-based Powells Buses. “We did the usual onboarding we have to do; that takes quite a lot of time. The whole social enterprise model takes a bit of understanding. People are a bit nervous, but we just have to explain to them clearly. They are both interesting organisations. 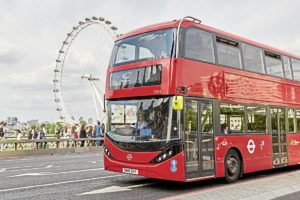 At the turn of the century, HCT Group won its first London bus route contract. Photo courtesy of Alex Grace

“The takeovers have gone well though; both have been fairly smooth. There was nothing that came out of the woodwork. Both have been positive.”

The acquisitions were something Dai had his eye on for a while. “We made a few offers over the last few years, so it wasn’t a new thing for us to go for them. We raised £17m, so we had some money to play with. Both Impact and Powells looked a good fit.”

Powells is located nearby HCT’s existing operations in Yorkshire, where it has the CT Plus (Yorkshire) brand, which provides community transport in West Yorkshire. HCT also operates in a similar area as Middlesex-based Impact. Dai said: “Both are geographically well located for us. We talked to the staff there and they were up for it too.”

As mentioned, Impact and Powells are now converting to become social enterprises. How far can the model be rolled out in other parts of the country? “For us, it’s a business model that works. It certainly works for public services. It’s what we’ve always done. There isn’t a huge margin to be made in the bus industry.”

HCT has grown from a small community transport (CT) outfit in Hackney to what it is now. Despite its roots being in CT, it runs a lot of its services using O licences, meaning it can legally tender for contracts and operate commercially. This means last year’s guidance on Section 19 and 22 operation (outlining the illegality of such licence holders to run for-profit services) has minimal affect on the company.

Dai commented on the updated Section 19 and 22 interpretations: “There are a few issues we have to understand when we look at changing something that’s been in place for 30 to 40 years. We need a clear focus on why we are making this change. What is the failing? We are trying to change a system that provides access for isolated and lonely people; changing it so people can make a profit. That seems strange to me. What’s the problem we are trying to solve with this change?

HCT Group has grown beyond London, including in the south west, where it now runs Bristol Community Transport

“A lot of CT charities make very small margins. They are not exactly commercial organisations.”

In a blog on the HCT website, Dai raised the idea of supporting CT organisations in getting O licences. He is also supportive of the Bus Services Act, which he says puts the passenger at front and centre of the debate.

“It’s like Brexit,” Dai said of the current tumult of Section 19 and 22 operators. “It’s the uncertainty of it. Section 19 and 22 is not our business model, but talking to local authorities, they’re in a bind. They are doing their best to build a safety net for people in the community, but they are now being told that’s in doubt.”

He continued: “We see the social enterprise model as more than viable for commercial operations. If some of the larger private sector operators want to support their communities, they can convert and it’s fairly straightforward.

“To convert, you have to be very clear what’s the purpose of the company. Are you trying to benefit the community or shareholders? It’s easy to do, but you need the right mindset to do it.”

HCT started bidding for transport contracts and feeding its profit back into society in the early-90s. “The industry has changed hugely since that time. It’s still exciting. We are very busy and we have huge ambitions. The management team here are very much onboard with what we’re doing.”

What does the future hold for HCT? “More of the same. One thing we are working towards is training disabled people to travel independently. We will carry on growing the commercial side.” 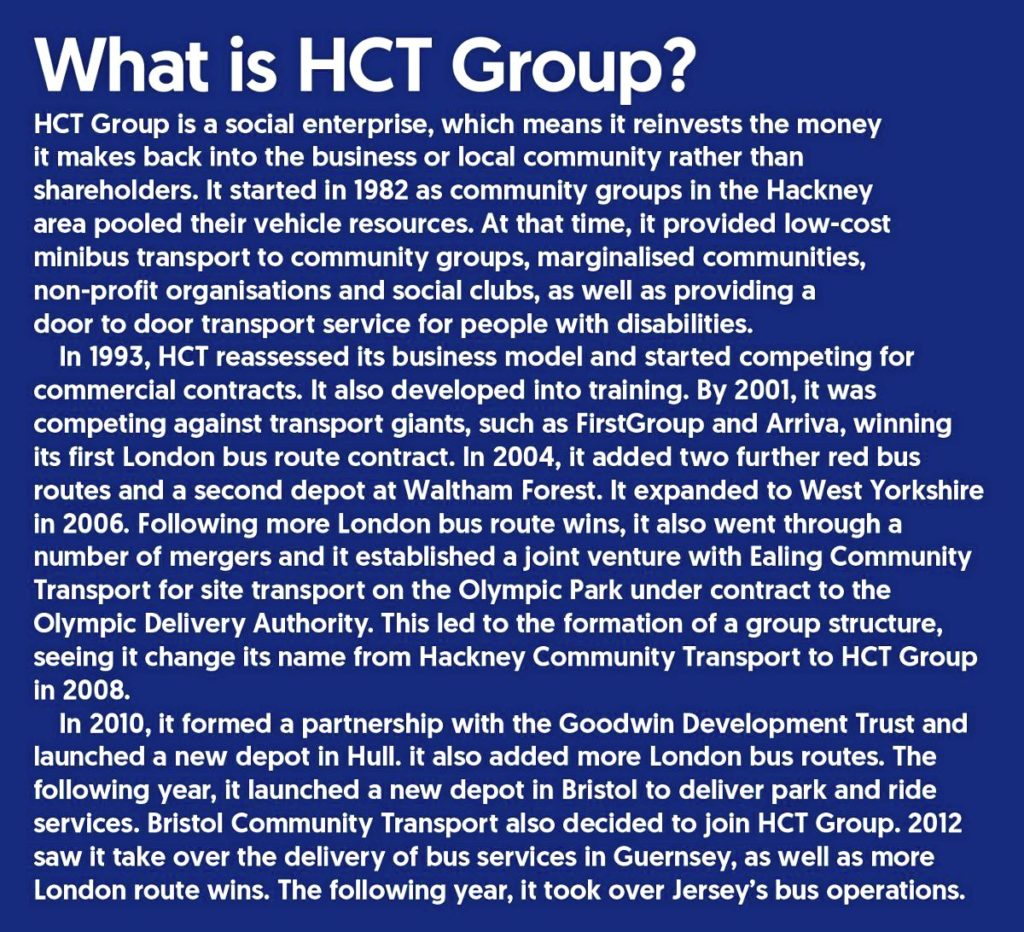 One thought on “Face to Face – Dai Powell: Spreading the message”