Having experienced success with its Belfast to Glasgow express service, Hannon Coach was looking forward to rolling out a similar route between Derry-Londonderry and Belfast. However, service permit difficulties have soured the experience for the Craigavon-based operator. Owen McLaughlin, Hannon Coach Marketing Manager, believes the state operator, Translink, has a monopoly over Northern Ireland’s bus and coach market and that this is at the heart of the issue.

Northern Ireland public transport remains a closed shop, according to Owen. However, he believes this may be about to change as the Competition and Markets Authority takes an interest.

B&CB has learned that the Competition and Markets Authority (CMA) in London has responded to a complaint raised by Hannon Coach regarding anti-competitive practices and issues related to poor competition across the operation and regulation of the public transport market in Northern Ireland. 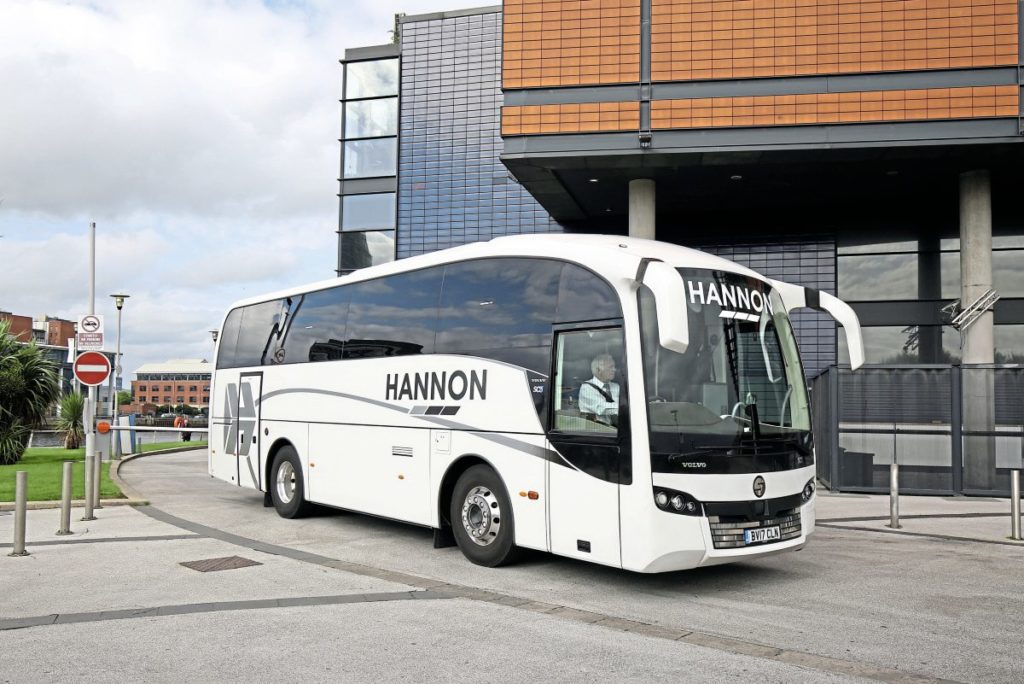 The basis of the complaint relates to the Department for Infrastructure (NI), acting as the local authority, not progressing Hannon’s applications for service permits necessary for the company to operate express services across the region.

Northern Ireland has a unique set up within the UK when it comes to public transport regulation and competition. Public transport reforms stalled in 2015 and effectively, Owen notes, all bus and rail services are operated by just one, state-subsidised operator: Translink.

Translink was directly awarded Exclusive Rights to its services in October 2015 through a Service Agreement with the local public transport authority, the Department for Infrastructure (NI). Unlike the rest of the UK, in addition to exclusive rights, Translink also receives significant capital and revenue subsidies from the local authority to operate theses services in addition to taking home all the farebox revenue.

Similar capital and revenue subsidies are not available for express services in Northern Ireland and the sector remains largely uncontested. The services proposed by Hannon Coach were intended to fill this gap in the local public transport market and, over the past two years, the company has sought unsuccessfully to enter the uncontested express sector in Northern Ireland.

In July 2017, the Department for Infrastructure turned down the first of Hannon’s applications on the grounds that the proposed non-stop express service could have a negative impact on the regular stopping services operated along the route by the state subsidised Translink and negatively impact its financial position.

Hannon challenged that decision through the courts and in February 2018 was successful in a judicial review brought against the Department for Infrastructure (DfI) and were subsequently awarded costs. 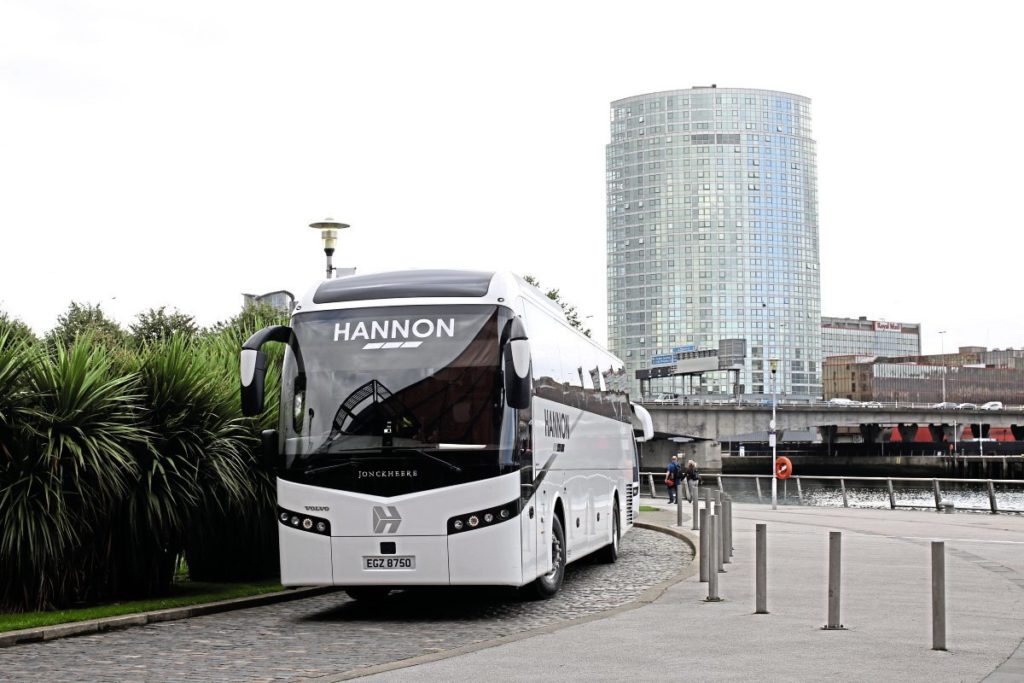 Belfast is a common location for Hannon to work from, including running its Belfast/Glasgow service

However, B&CB understands that the Department has not issued the permits and, in January of this year, wrote to Hannon Coach to say that it considers that a decision on the company’s permits “represents a major decision that would under normal circumstances be referred to a Minister if in post.”

Owen McLaughlin said: “Given the ongoing lack of a functioning local government in Northern Ireland and with no Ministers in post following the collapse of the local Stormont Assembly, this held out the prospect that the Department could effectively pass the buck and indefinitely avoid giving any decision and continue to kick the can down the road.”

Owen added: “Having been through a successful judicial review and having been subsequently assured decisions would be forthcoming we found the new position wholly unacceptable and it was at that point that we raised the complaint with the CMA.”

B&CB understands that following Hannon’s complaint, which was submitted in January, representatives of the CMA travelled over to Belfast in September to discuss the matter directly with the Northern Ireland Department for Infrastructure.

Since then, the Chair of the Competition & Markets Authority, the Rt. Hon. Lord Tyrie, has written to Hannon Coach’s local MP, David Simpson, to express his ‘concerns’ and advise that the CMA will encourage DfI to address the situation and deliver on its policy objectives.

Hannon’s difficulties are known to the Federation of Passenger Transport Northern Ireland (FPTNI), with the operator being a member of the organisation. Karen Magill, Chief Executive of FPTNI, said: “As far as I’m concerned, the Federation and its members do their best to work with local government departments.

“The issues Hannon is experiencing have been ongoing for two years. It is a very disappointing situation for both passengers and the industry when an operator has taken the time to invest in developing services and their business, like Hannon has. The fact this is taking so long is disappointing.”

Karen highlighted a difficulty Owen mentioned: “We have no Minister in place for this. Basically, we need somebody to make a decision.” 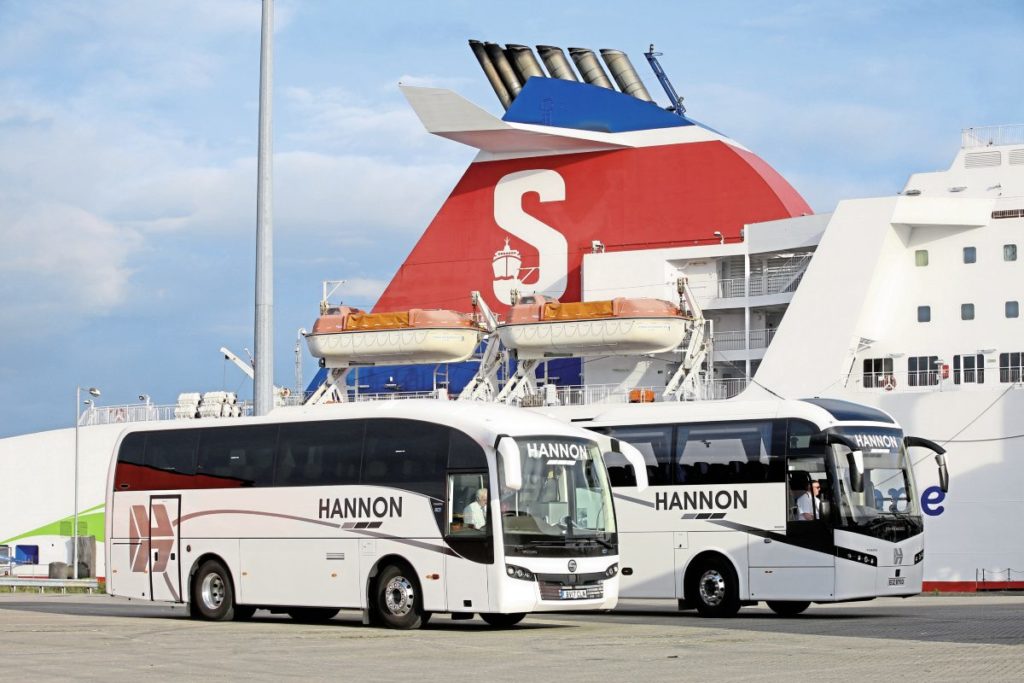 Hannon works with Stena Line on its Belfast to Glasgow express service, which has significantly increased passengers on the ferries

The battle continues for Hannon Coach and it is keeping a close eye on the CMA investigation but has not ruled out the possibility of further legal action. Owen said: “The delays to date have brought about significant financial cost to Hannon Coach and severely disrupted our proposed investment and the resulting creation of around 75 jobs across Northern Ireland.”

“The current situation is untenable. In Northern Ireland we have two of the most congested roads in the UK within south Belfast yet no strategic Express Services to give commuters a viable public transport option that could encourage modal shift.

There is no extra public money to provide Express Services, so the gap needs to be filled by the private sector.

“With Brexit on the horizon many of the big GB operators may be putting further European expansion on hold. Eyes will inevitably turn towards Northern Ireland as the last part of the UK to open up to the private sector and the pressure to complete public transport reform will grow. It will, therefore, be interesting to see what comes out of the Competition and Markets Authority investigations.” 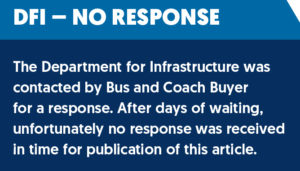 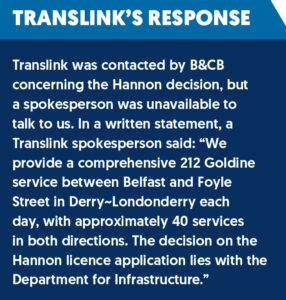