Mayor of London, Sadiq Khan, has launched what are England’s first hydrogen double-deckers.

Their gas cylinders are manufactured by Luxfer in Nottingham. The hydrogen for the buses is currently being produced at Air Liquide’s plant in Runcorn, harnessing waste hydrogen as a by-product from an industrial chlor-alkali plant. Oxford-based Ryze Hydrogen is responsible for transporting the fuel to the fuelling station. From 2023, the hydrogen is planned to be even greener as it will be produced by electrolysis powered by a direct connection to an offshore windfarm.

A fuelling station at Perivale Garage, Ealing, completed by Danish engineering firm Nel Hydrogen will top up each hydrogen fuel cell bus once per day in as little as five minutes. 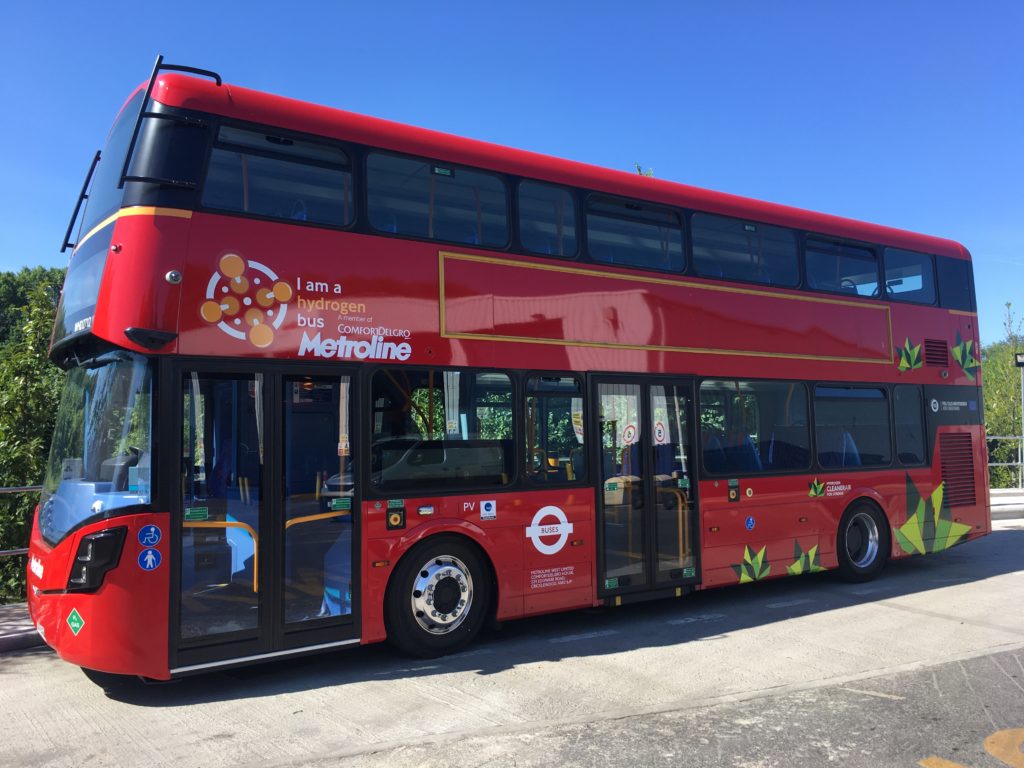 In addition to around £6 million of funding from TfL, more than £5 million of funding has been provided by European bodies, by the Fuel Cells and Hydrogen Joint Undertaking, and the Innovation and Networks Executive Agency (INEA), an executive agency of the European Commission. There has also been £1 million from the Office of Zero Emission Vehicles.

TfL has helped pave the way for cheaper hydrogen buses across the rest of the UK, having led the UK procurement within the Joint Initiative for Hydrogen Vehicles across Europe (JIVE), to buy in bulk with other UK authorities. In total, the JIVE project seeks to deploy 139 new zero-emission fuel cell buses and associated refuelling infrastructure across five European countries and has received funding from the Fuel Cells and Hydrogen Joint Undertaking.

With sustained financial support from the Government, TfL could look to accelerate its plans for a zero-emission bus fleet from 2037 to 2030 in order to reduce carbon emissions and address the public health emergency caused by dirty air.

“We hope that other cities around the country will follow London’s lead” – Wrightbus CEO, Buta Atwal

Wrightbus CEO, Buta Atwal, said: “At Wrightbus, we’re incredibly proud to be launching our world-first zero emission hydrogen double deckers onto the streets of London to help turn its iconic red buses green. London residents – and visitors to the capital from around the world – can experience what it’s like to ride in a UK-made hydrogen-fuelled vehicle that produces no harmful emissions from its exhaust. Thanks to TfL’s visionary approach, the city will have the first fleet of hydrogen double deckers in England and the benefits to the city in terms of CO2 reduction will be significant. We hope that other cities around the country will follow London’s lead and help us in our ambition to decarbonise public transport and improve air quality.”

“Hydrogen is an extremely promising renewable fuel for public transport vehicles and we are looking forward to proving its application on London’s roads” – Sean O’Shea, CEO at Metroline

Sean O’Shea, CEO at Metroline, said: “Hydrogen is an extremely promising renewable fuel for public transport vehicles and we are looking forward to proving its application on London’s roads. The hydrogen buses are an exciting new addition to our fleet, and highlight Metroline’s continued dedication to making London’s streets greener. Our engineering teams have been hard at work preparing the buses for service and we are proud to be operating the first hydrogen powered double-deck buses in London in the hope that it will further showcase the application of sustainable vehicles in the capital.”