A fleet of ADL Enviro400EV electric single-deckers are now in service on the new Stourton Park & Ride.

The vehicles entered service on 6 September, with the new park & ride facility officially being launched on 16 September. The site was opened by the Minister for future of transport and environment, Minister Rachel Maclean MP.

The site is the third park and ride in Leeds, alongside Elland Road and Temple Green. According to Leeds City Council, the new facility is now attracting a steadily growing number of users.

Solar-powered Stourton Park & Ride has buses running every ten to 15 minutes and costs £3 for a return ticket. 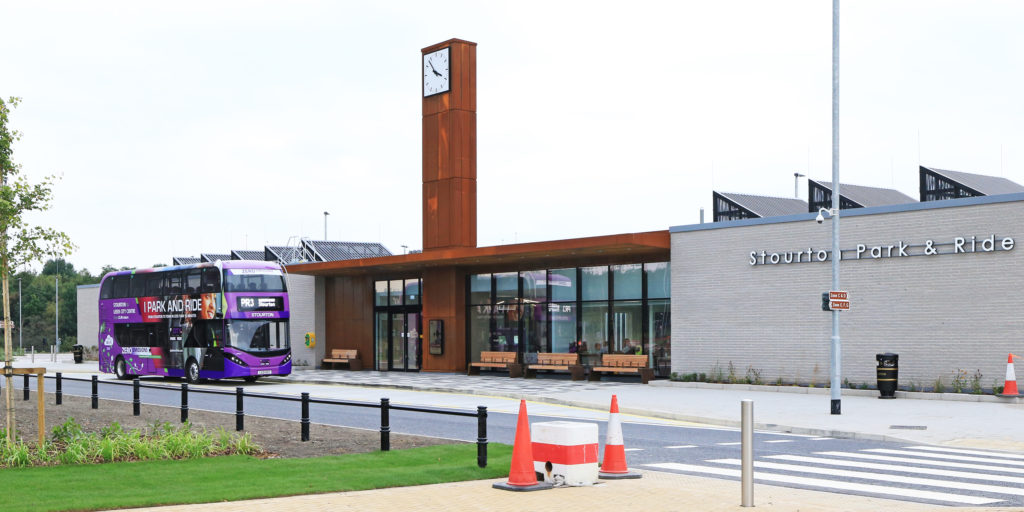 “The Minster enjoyed for herself the speed, simplicity, and comfort of a zero-emission journey from the city centre to Stourton in less than 15 minutes” – Martin Hirst, Commercial Director of First West Yorkshire

Martin Hirst, Commercial Director of First West Yorkshire, said: “The Minster enjoyed for herself the speed, simplicity, and comfort of a zero-emission journey from the city centre to Stourton in less than 15 minutes. It’s a trip that is growing in popularity since we began the service last week as people discover how easy it is to get in and out from the south side of Leeds. We expect this to continue as more customers see the benefits of time and money saved through sustainable travel which helps to reduce congestion and create cleaner air in the city.

“We were also able to demonstrate how, with fully electric buses, we are building on the continued success of Park & Ride in Leeds with our regional and local authority partners.”

The £38.5 million public transport project situated in the Stourton area of Leeds, at junction 7 of the M621.
Stourton park & ride received funding from the DfT to develop Leeds’ Public Transport Investment Programme, together with a grant that was awarded by the European Regional Development Fund.

The official opening marks the 150th anniversary of public transport in West Yorkshire. On this date in 1871 a horse tram commenced between the city centre and Headingley. Transport Yorkshire Preservation Group and the Aire Valley Transport Group brought two vintage buses to the park and ride site during the launch.