A virtual-reality bus driving-simulator is now in place at National Express West Midlands.

Using the DriVR machine’s fully immersive 360-degree image, bus drivers can dive into a variety of driving scenarios including severe weather, driving in the dark and emergency braking. It is designed to simulate a real-life trip out on the road, without the risks brought by reality.

Not only does the simulator allow drivers to experience scenarios which are classed as high-risk on the road, they can also choose to reset and repeat the scenario or manoeuvre until they feel confident and well equipped to deal with any situation their role entails.

“… all 300 drivers who have used it so far have given 100% recommendation to others” – Jenny Tocknell, Head of Operations for National Express West Midlands

Jenny Tocknell, Head of Operations for National Express West Midlands, said: “National Express bus drivers are the best in the country. But we’re always looking at what more we can do around safety standards. So we are very excited to be the first business in the UK to have a Simfor driving simulator.

“These machines are a significant investment for the business, costing £30,000 a machine. But it’s a really efficient way of working on any driving behaviour and all 300 drivers who have used it so far have given 100% recommendation to others.

“Using the DriVR simulator means we can provide training on high-risk manoeuvres without the risk of doing that on the training yard. This is revolutionary and showcases how far ahead National Express are when it comes to safety.” 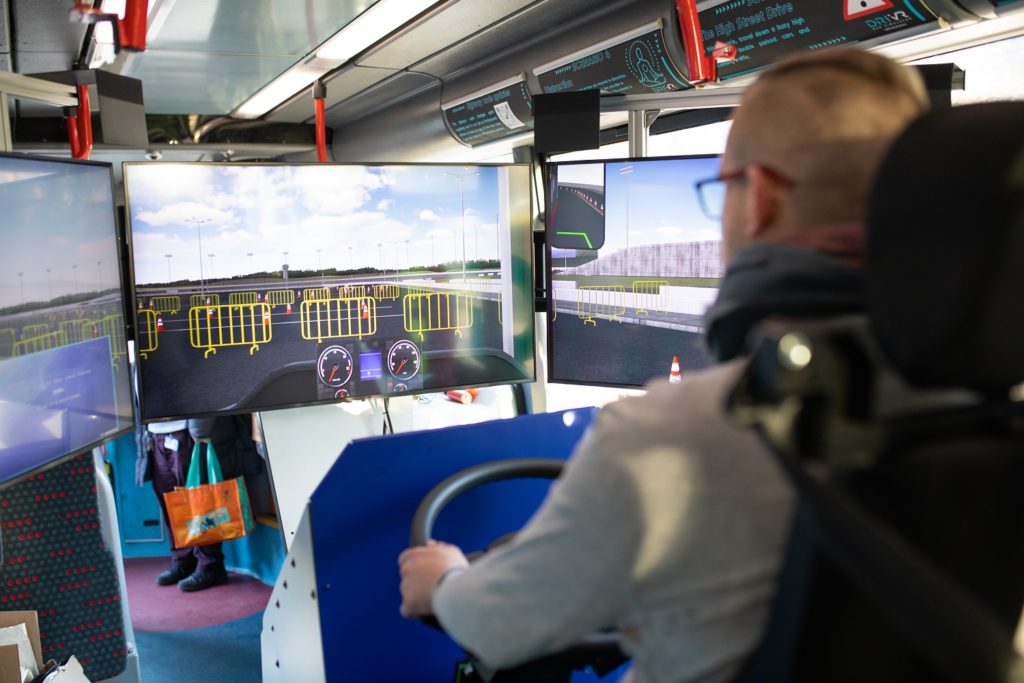 National Express West Midlands is currently the only business in the UK to have this premium Simfor kit, which arrived in June from Spain. There are due to be four of these simulators within the business by early 2023.

“Simulation has been long used for professional training in high-risk sectors and it was just a matter of time for the passenger transport sector to apply it” – Simfor’s Head of Business Development, Alexia Alvarez

Simfor’s Head of Business Development, Alexia Alvarez, said: “Simulation has been long used for professional training in high-risk sectors and it was just a matter of time for the passenger transport sector to apply it.

“It’s very exciting for us to be working with National Express, as they are our first client in the UK. Our intention is to grow together to create real, justifiable results that can be extrapolated to other areas of the company and industry.

“We hope that these first four units will be just the beginning of a proliferation thanks to the success of National Express’s internal training which could open doors to new business opportunities for both parties.”

The mobile simulator also visits recruitment shows. Over 50 members of the public were recently given the opportunity to try the simulator at National Express Coventry’s careers fair in Coventry.

A further two simulators will be installed at National Express West Midlands’ training academy in Walsall and its new depot in Perry Barr, which opened earlier this month.

Performances can be monitored and evaluated via personal IDs created through fingerprints which instructors can then use to adapt training programs to various scenarios and needs. Once National Express West Midlands’ 3,500 bus drivers are all simulator trained, the company will start using the technology with its coach drivers too.