Do you like a good read, asks Steven Salmon? You might have already looked at the EU Withdrawal Act 2018 but you can now throw another log on the fire and dig in to the 1,246 pages of the EU-UK Trade and Cooperation Agreement. What will these momentous tomes mean in practical terms for the businesses that run buses and coaches in the UK and for the firms that manufacture the vehicles? How will Brexit work now the talking is over?

This article is written from the perspective of the UK mainland and does not touch on the special situation on the island of Ireland. The governments in Wales and Scotland will have some scope to walk in different directions in devolved policy areas, but the practicalities of taking a coach party to Europe will not vary. Although its impact will be overshadowed by the pandemic, Brexit cannot be ignored.

The first contrast is between the measures that affect people’s rights to live and work in the UK and everything else. The EU Withdrawal Act effectively writes the principles, and most of the detail, of EU law across to the UK statute book, but it does not perpetuate the right of people from the EU to move to the UK and take a job here. We know that workers from across Europe – and particularly from the states that joined in the major expansion of 2004 – have made a huge contribution to road passenger transport in the UK.

Most operators would like to be able to welcome new generations, but the industry’s pleading (along with the health care sector and the hospitality world) seems to have fallen on deaf ears. It now seems to fall to us to get unemployment down by offering pay and conditions that attract people from local communities, first and foremost. The options for tapping world markets for high-skill, relatively well-paid people will not have much relevance for operators who need to cover bread and butter contract work in a fiercely competitive market, or offer good value fares to passengers who do not have a lot of cash to spare.

When they have decided how to go about getting the people they need, bus operators’ thoughts will turn to the medium term. The way the bus market is organised (the “London and the rest” model) is governed by some fairly prescriptive EU legislation which has been written across into UK law. Most of the current practices will continue without challenge. The EU rules date from a period when there was a presumption against direct bus operation by public authorities, so national legislation might need to be tweaked if someone decides that municipal bus companies with a local monopoly should make a comeback in the UK.

Ideally, we can stop worrying about a state aid case being brought against our Government or our local authorities for supporting commercial operators when a pandemic strikes the world, or against an authority that pays 97p for concessionary journeys when the model says it should be 91p

EU legislation has also governed who needs a full blown operator’s licence and who can offer services to passengers with a permit. This has been a bone of contention between operators who needed a full licence and others who did not. Exactly the same words on the demarcation now sit in domestic legislation, but “Europe” no longer has an enforcing role, and it would be open to the UK to tweak the rules. In due course it should be possible to revisit issues such as the length of bus route that can be operated under domestic drivers’ hours rules and whether it is really important for someone who drives for a couple of hours a day in school terms to have compulsory professional training.

Waving goodbye to EU membership will not guarantee that we can wave goodbye to the issue of state aid. A select band of UK transport enterprises will continue to be significant players in some European markets and the provisions of the Trade and Cooperation Agreement are intended to stop the Government helping them to compete with funding through the “back door”. Ideally, we can stop worrying about a state aid case being brought against our Government or our local authorities for supporting commercial operators when a pandemic strikes the world, or against an authority that pays 97p for concessionary journeys when the model says it should be 91p.

International coach tourism should be able to follow a well defined path, given that coaches have been coming into the EU from its neighbours for as long as the Community has existed. There will be continued technical alignment for vehicles that pass over the border, and there is no obvious reason for divergence for the ones that stay on domestic work. There will be new bureaucracy and new paperwork to learn. For example, the Interbus waybill includes a passenger list (which was long gone from the EU version). If your coach is pulling a trailer it will have its own insurance green card which the driver will need to carry (and it will not necessarily be green!).

Photocard licences will be recognised

Drivers will face fewer hurdles than appeared to be the case in the early stages of the negotiations. According to the Government website they will not need an International Driving Permit as long as they have a plastic card driving licence (which they will have, of course), nor will they need a working visa or work permit providing they are not in the EU for more than 90 days in any 180. The Trade and Cooperation Agreement solves one problem that the industry foresaw, namely the authority to drive from the UK, though the EU, to a country that is not a signatory to the Interbus Agreement (notably Switzerland). Unfortunately, these journeys will need a different waybill. The widespread changes will be new for enforcers as well as for operators, and fingers are firmly crossed that we will not see fines for legitimate practices, or heavy penalties for things which are safe but technically wrong.

The rules about posting drivers to work in EU member states are written explicitly for freight operations. There is a logic that says that a driver who takes a coach full of British tourists to the Rhineland and, a few days later, brings them home again is not a posted worker in Germany, but it remains to be seen whether the German enforcers will see it that way. It was ambitious to hope that UK operators could retain cabotage rights after Brexit and they have not. No longer will it be legal to pick up a party at Schipol Airport and take them to Innsbruck via Bingen (although it will be possible to take an empty coach to Schipol to pick up a party coming to the UK). For some firms this will be a significant market loss, and it is hard to identify a balancing gain. It will be illegal for EU operators to carry a party wholly in the UK, but our enforcement agencies have no culture of checking for this, or stopping it if they find it.

We’ve succeeded outside the EU before and we can do it again. We have scope to tweak – if not to completely rewrite – our own rules

Like the operators, manufacturers will have new processes to learn. However, the spectre of tariffs has gone away and the long term structure of the market, for both home producers and manufacturers who sell products into the UK, looks stable. It is hard to speculate whether leaving the European single market will reduce competition for the business of UK buyers, even if vehicles and parts can be imported tariff-free. It is almost certain that any Brexit effects will be hidden in the landscape of cash-strapped customers and good quality used assets on the market as the pandemic recedes.

And the big picture? We’ve succeeded outside the EU before and we can do it again. We have scope to tweak – if not to completely rewrite – our own rules. We might regret the tap of willing workers being turned off, but the current UK immigration policy is not an inevitable consequence of Brexit and we can use the democratic process to try to change it. We can see what we have lost in terms of market access for coach operators, even if only a small minority took advantage of the opportunities. We can see where we stand. We can concentrate on surviving, and re-growing as soon as the conditions are right. 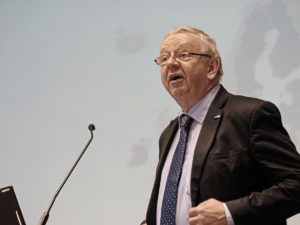 Steven Salmon is the former Director of Policy Development and International Manager for the Confederation of Passenger Transport, and President of the Social Affairs Commission for the International Road Transport Union (IRU). Before this, he had a career in managing coach and bus operations.