New body-worn cameras have been issued to staff working at Tyne and Wear bus stations and the region’s Metro light rail system. The cameras are intended to deter troublemakers and provide extra reassurance to passengers as lockdown eases. 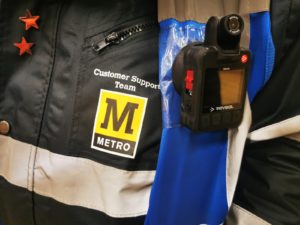 Tyne and Wear’s transport authority, Nexus, has invested in 100 extra lapel-worn cameras, which were first introduced in 2018, bringing the total number in use to 150. This ensures that every customer service advisor has one when they are on duty across the Metro and bus network.

The tiny CCTV cameras record high-resolution footage that can be used as evidence to support police investigations. The announcement follows Nexus completing a £4.2m project to install 740 new CCTV cameras across the 60 stations on Metro.

Metro Operations Director, John Alexander, said: “Overall crime rates on the bus and Metro network remain low, but we remain focused on issues of anti-social behaviour and ticketless travel. The body-worn cameras provide our staff with a new tool for managing these issues.”

Nexus first introduced body cameras in 2017 as part of a trial. They were then made permanent the following year. Footage captured on the cameras can be accessed by Northumbria Police and the British Transport Police to support prosecutions.

Nexus staff will only turn cameras on when doing so could help prevent, or document, an incident that may require a subsequent investigation. A red light will be visible on the front of the device when it is recording.