The city’s CAZ is set to go live on 1 June 2021. It was due to be put in place last year, but the pandemic delayed its implementation. 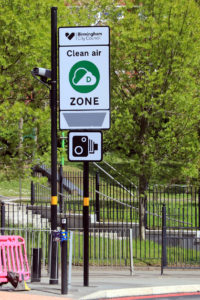 The CAZ is to operate 24 hours a day, seven days a week. It will cover all the roads within the A4540 Middleway Ring Road (but not the Middleway itself). Buses and coaches must meet Euro VI standards to enter the CAZ and not be charged. Non-compliant PCVs will have to pay a £50 charge per day if they enter the Zone.

Electric and hydrogen vehicles will not be charged.

Community and school transport vehicles will be exempt from CAZ charges. Exemptions are not automatic and must be applied for. Click here to apply for an exemption.

Birmingham City Council has paid out more than £1million in CAZ support grants for Birmingham-licensed taxi drivers. As part of its preparations for the launch of the Zone, the Council has issued over £1 million in grants to Birmingham-licensed hackney carriage and private hire drivers. The grant scheme aims to support these drivers to upgrade or replace vehicles that do not meet the CAZ’s emission standards.