Blind spots can be deadly for cyclists. There have been many occasions where a bus or coach has been involved in a fatal collision with a cyclist, not to mention the many near misses and less serious collisions. There have been a slew of technological developments to combat this problem of late, from camera systems to radar devices. Now a much simpler, yet just as capable, solution has entered the market: the wide angle Cyclesafe mirror from Ashtree Vision and Safety. Chris Peat spoke to the company’s Sales Director, John Roper, to get an insight into this product.

The girl on the bike here is in the bus driver’s blind spot, invisible to the driver. 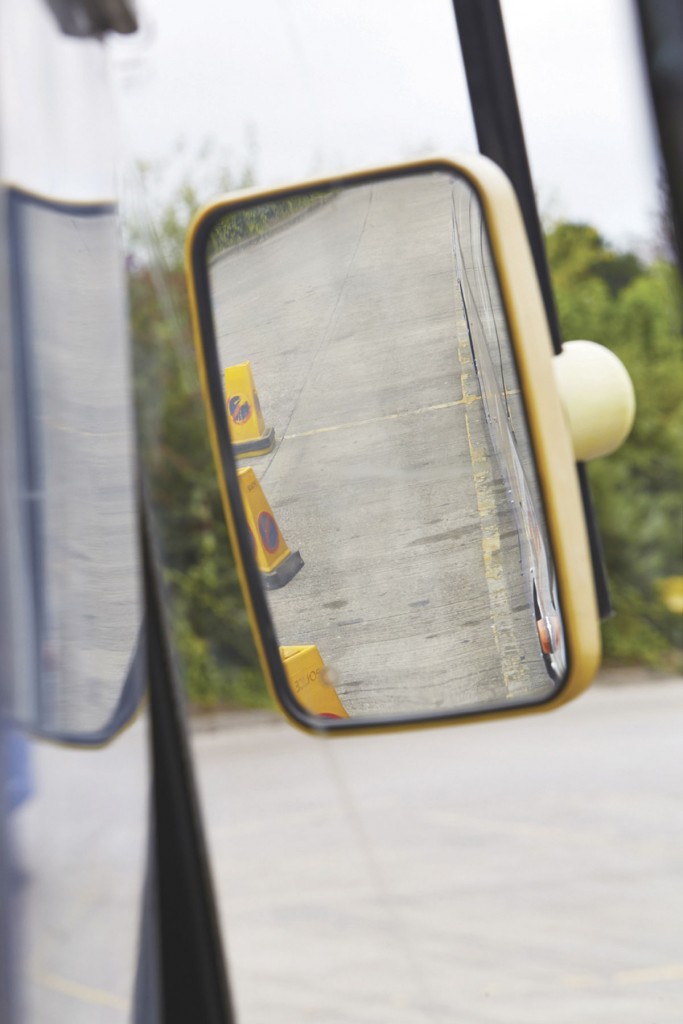 With the girl still in the same position as she was from the first image, here we can see the view in a conventionally fitted mirror. She is clearly out of sight. Some mirrors on buses have an even smaller viewing field than this.

Cyclesafe is a twin lens mirror designed to give drivers greater visibility of other road users around buses in urban environments. Fitting mirror arms of 16-28mm in diameter, it offers a low cost option for combating collisions with not only cyclists, but other pedestrians and objects. Cyclesafe eliminates the blind spot to the left of and close by the bus found on a conventional mirror, meaning a bike rider can be clearly seen when on a conventional mirror they couldn’t. It can also be used on the off side when buses are pulling away from the kerb.

Ashtree conceived the idea of Cyclesafe for buses and coaches around the latter half of last year, at a time when cyclist collisions was a hot topic in the press and in the industry. It was a period when bike riders were labelled as Vulnerable Road Users (VRUs) and Boris Johnson was raising concerns over cyclist safety.

The idea of a wide angle mirror that allows the driver to see blind spots is not something new though, John’s company has been supplying these products to other CV markets for a while. It developed out of the construction industry, where these mirrors have been fitted for some time, with the product being directly transferred over to the bus and coach sector. It is manufactured under European type approval standards and due to its original applications, was designed to be especially hardy and rugged. As well as for the OE market, they are ideal for retrofit, according to John, taking ‘seconds’ to fit by someone with an Allen key.

Cyclesafe mirrors are available to buy now and have been displayed at trade shows; you may have seen them at the IAA in Hanover or at Euro Bus Expo. Feedback for the units has been great, according to John, with some sales of them having already been made since they were first marketed into the PCV sector during the last few months of last year. Trials of the product are taking place in a number of fleets nationwide, with one major operator testing it at four of its depots across the country.

This is the view from a Cyclesafe mirror, with the girl still in the same position as the first image. No longer is she in the blind spot.

John is aware there are other systems available for this, with some electronic equipment on the market that can automatically detect cyclists, as well as camera based devices. However, his concern is that drivers may become complacent of electronic alarms. He said Cyclesafe ensures the driver still stays alert to cyclists and continue to check for them regularly. He pointed out that his product costs a fraction of the price of other solutions. Also, he said, ‘Cyclesafe is 100% accurate, there are no false alarms, if you can see it in the mirror it is there’.

This is not to say John is completely opposed to the electronic models. He suggests the radar and camera systems could be used in conjunction with Cyclesafe. If the electronic device detects something, the mirror could be used to check to ensure there is a cyclist or person or something else in the blind spot, ensuring it wasn’t a false alarm.

Cyclesafe is typical of the types of product Ashtree promotes. The company focuses on mirror safety products, hence the change of name around 18 months ago. The company was previously known as Ashtree Glass, but has now gone for the moniker Ashtree Vision and Safety, better reflecting what it does. ‘The word “glass” doesn’t mean anything specific. We used to have people approach us and ask, “Do you do windows and glazing?” The new name just says better who we are and what we do,’ said John.

A further safety related product it is developing is a knock-back mirror arm. Unlike conventional mirror arms, this device has a ‘knuckle’ that enables it to fold back vertically rather than horizontally. This is intended to lessen the impact it has in a collision, folding away from whatever it hits. This should have the affect of reducing damage to not only what it collides with, but the vehicle too. Like Cyclesafe, this is currently on trial with operators.

With wide angle mirrors such as this fitted as standard on trucks for many years, the bus and coach industry appears to be one step behind here. This is surprising considering the nature of bus operations and where they operate, quite often with an abundance of pedestrians and cyclists nearby. With so much concern arising over cyclist collisions lately, the fitment of such mirrors may well be the least that can be done to help avoid what can be a fatal incident. Cyclesafe is perhaps the simplest, yet still effective, method for overcoming the problem.