A digital demand responsive transport (DDRT) pilot in Aberdeenshire is to come to an end in April.

The Ready2Go Around Inverurie initiative operated by Watermill Coaches runs Monday to Saturday and involves five minibuses operated under contract to Aberdeenshire Council. It covers Inverurie and the surrounding area, including the communities of Insch, Rothienorman, Oldmeldrum, Kintore, Kemnay and Monymusk. 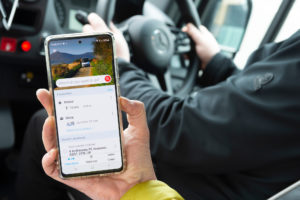 The service can be booked using an app. Picture courtesy of Aberdeenshire Council.

The service picks up and drops off booked passengers at physical or virtual bus stops and, on average, around 1,100 passenger trips are being made each week. Since it was introduced in August 2021, customers have been able to place bookings 24/7 using a free app to request a bus for an immediate ride or for a future departure time. During office hours telephone bookings are also accepted. The pilot service was introduced to test a revised approach to the provision of supported bus services and came during a period of changes in travel needs and patterns arising from the Covid pandemic.

In response to a recent Insch bus service survey, 60% of respondents who use Ready2Go said they would recommend the service to a friend. The DDRT appears to be performing well against policy objectives such as encouraging modal shift away from the car and supporting health and wellbeing objectives, according to Aberdeenshire Council. People also like the Watermill Coaches vehicles and drivers.

Data from the council’s analysis suggested that the Ready2Go service had been successful in helping to reverse ongoing bus patronage decline.

However, the Council reports a number of issues have been impacting the service including high running costs, relatively low numbers of passengers travelling at the same time on each bus and passengers being unable to book a bus journey. The recent Insch bus service survey indicated, on balance, a preference in that area for a timetabled service over Ready2Go with customers noting a deterioration in Ready2Go service reliability in more recent months as demand has increased across the service area.

Tenders will now be sought from bus operators for replacement timetabled journeys covering the previously withdrawn fixed routes between Insch and Inverurie and Rothienorman and Inverurie.

Although the Ready2Go Around Inverurie service will be withdrawn, given the positive aspects of its delivery, the pilot project will continue building on the lessons learnt to-date and a Rural Transport Project Officer is being recruited, part-funded by Nestrans, to evaluate the service and develop a strategy, including DDRT, for addressing transport connectivity issues in North East Scotland.

“…the high cost of running such an extensive service, covering long operating hours and a large geographical area, coupled with ongoing difficulties in accommodating passenger demand have been key factors in our decision” – Ewan Wallace, Head of Environment and Sustainability at Aberdeenshire Council

Ewan Wallace, Head of Environment and Sustainability at Aberdeenshire Council, explained that while it had been a difficult decision to withdraw the service, the wider project would continue to assess the future suitability of DDRT taking into account the evolving smart technology used to manage such services.

He said: “There have been many advantages demonstrated by the Ready2Go service in that it has enabled residents to travel directly between places previously unserved or requiring connecting transport. Within Inverurie, for example, there are Ready2Go virtual bus stops at locations not served by other bus services.

“We know that many customers who have had good experiences of Ready2Go will be disappointed by its withdrawal, however the high cost of running such an extensive service, covering long operating hours and a large geographical area, coupled with ongoing difficulties in accommodating passenger demand have been key factors in our decision.”